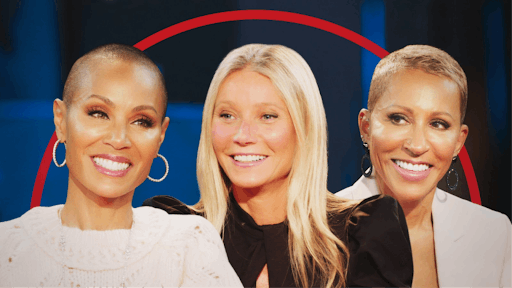 When Gwyneth Paltrow announced that her acronymous wellness brand Goop would return to Netflix for a show solely focused on sex, we imagined cheers erupting across Beverly Hills. To mark this momentous occasion, Paltrow did what any media-savvy entrepreneur would do, and made an appearance on Red Table Talk with Jada Pinkett Smith, Willow Smith, and Adrienne Banfield-Norris. “Fair warning,” Pinkett Smith cautions in the opening moments of the crossover we’ve all been waiting for, “We are having a sex talk at the table.”

On Sex, Love & Goop, couples (mostly straight and young, though two pairs are queer and one is on the more mature side) seeking to reconnect a lost spark, get on the same page about their sex lives, or otherwise replenish a strained bond arrive at Goop headquarters in Santa Monica, where they’re paired with a sex coach who has developed a personalized approach to helping them find their same wavelength. A very inquisitive and curious Paltrow also appears throughout the series to facilitate the larger group meetings with the couples, and to discuss one on one with one of the therapists her own hangups around shame and sexual wellness.

It’s no surprise, then, that Pinkett Smith’s intergenerational talk show (the brilliance of which cannot be overstated) on Facebook Watch proved to be the perfect forum for Paltrow to share clips from her new Netflix series, open up about her own personal shyness around sex, and of course shill a few Goop products (including a less sharp, wooden version of the wolverine claws incorporated into the sex therapy depicted on the show).

The red table also became a forum for the three ladies to talk about the lack of sex education they received in the home, and the complexities of learning how to explain sex to their children. In true Goop fashion, while speaking to Pinkett Smith and Banfield-Norris, Paltrow calls to mind a quote that helped her figure out how to talk about sex with her own two children, 17-year-old daughter Apple and 15-year-old son Moses. In the exclusive clip below, you’ll find that the quote is attributed to none other than… Banksy? “I’m going to paraphrase badly, but, this generation of parents will do anything for our kids,” she quotes, before citing the college admissions scandal as an example of such parental misguidance. “We will do anything for our kids except let them be who they actually are.”

“I read it and had chills,” Paltrow says. “I try to be really conscious about letting them emerge as who they are, and being loving and supportive, and I fuck it up all the time,” she goes on. “[Apple] is 17, and everything I say is wrong!”

This comment gets Pinkett Smith nodding (Red Table Talk once previously discussed the college admissions scandal in particular, and invited Olivia Jade onto the show to discuss her mother and father’s role in the transgression). She also humorously assures Paltrow that any friction between her and her daughter will change by the time she’s 19.

All in all, this episode is somehow peak Goop and peak Red Table Talk all at once. It’s a true meeting of the minds—the Smiths, experts of unpacking family trauma at the table, and Paltrow, the wellness guru that wealthy women have been leaning on since she founded Goop in 2008, united at last.