After a two-year hiatus, the tide has come in for Australian television. As a sea of frocks washed across the Gold Coast, the awards flew out so fast they could have been coming from Oprah Winfrey. You get a Logie! And you get a Logie!

During his speech accepting the award, which was delivered at 11:30pm, Blake acknowledged his wife Zoe Foster Blake, and their kids Sonny and Rudy. Though he said the kids would probably be watching tomorrow – “on YouTube, when I make them” – Blake said “the greatest prize is getting to be [their] dad”.

He was also one of the few award winners to speak directly to the audience on the state of the industry. “It’s a strange thing winning a Logie,” he said. “Whether you watch Lego Masters or any of the shows, it has been a really weird last couple of years in this industry. I know I speak for everyone here when I say we’re so grateful to continue doing what we love. And if you’re watching this… you’re an insomniac. But you’re also someone who supports Australian TV and we would not be here without you.” 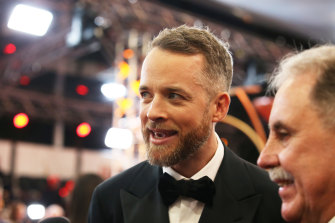 The man of the moment …. Hamish Blake at the 2022 Logies.Credit:Getty

As a cultural institution, the Logies hold a peculiar place in the national bosom, alternately the target of praise and derision. The hosting gig was once the industry’s greatest poisoned chalice, so bittersweet that few dared sip it. As the sun set on the Gold Coast Convention Centre it fell to comedian Julia Morris to bravely open proceedings.

“No big song and dance number from me, I am too old,” Morris said. “What sort of night do we have ahead of us when they let a loose unit like me open the show. I used to watch the Logies and think, why do the same seven people get all the work? But here’s the thing, now that I am one of them, I don’t want that to change.”

The much-loved comedian played a gentle hand, taking aim at gender wage disparity and cancel culture. And perhaps because it had been two years between gigs, the normally hard-to-sell audience responded warmly. That sentiment – positivity after two years of pandemic cancellations – seemed to be the recurring theme of the night.

The Tokyo Olympic and Paralympic Games (Seven) won the award for outstanding sports coverage; presenters Tony Armstrong and Dylan Alcott announced the win. “Having an Indigenous man and a guy in a wheelchair up here, on commercial TV…we’ve got a long way to go, but it’s massive,” Alcott said.

In one of the night’s most anticipated moments, the industry paused to honour television legend Bert Newton after the 83-year-old legend died in 2021. Invited to share her reflections on her late husband, Newton’s wife Patti, who arrived at the awards accompanied by the couple’s daughter Lauren, was greeted with a standing ovation when she walked onto the stage.

Newton, who worked on each of the commercial networks, was held in near-universal reverence by the industry. “I didn’t think that I was going to be able to do this tonight, it’s still very raw,” Newton said. “I will never get over him not being here. But I know that he is with me.” In particular, Newton loved the Logie Awards, Patti said. “This was his baby,” she said. “He absolutely loved it.” 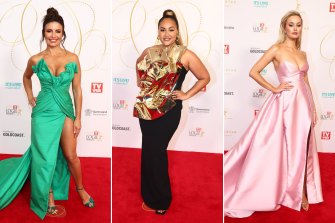 The Graham Kennedy Award for most popular new talent was awarded to ABC News Breakfast sports host Tony Armstrong, who thanked the NIRS (National Indigenous Radio Service), which he credited for giving him the exposure as an AFL caller that allowed him to land his job on the ABC.

The 32-year-old presenter also told his boss, ABC news director Justin Stevens, that he may need a pay rise – “contract negotiations, mate,” he said – and thanked his mother Margaret, who he described as a “superstar.”

The award for outstanding children’s program might usually not earn major fanfare, certainly in a lineup that saw Gogglebox Australia, Travel Guides and The Project winning awards, but the 2022 winner is one of Australia’s most valuable television exports, the ABC’s Bluey. The series, produced by Brisbane-based Ludo Pictures, has sold to more than 110 countries. 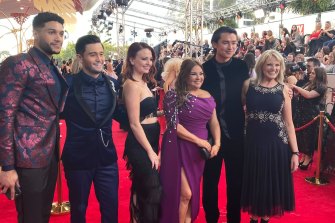 The cast of Neighbours at the 2022 Logies.Credit:Thomas Mitchell

The Gold Logie for the TV Week Hall of Fame was given to sports broadcaster Bruce McAvaney. The 68-year-old broadcaster, who received the Medal of the Order of Australia in June, 2002, for services to sports broadcasting, has been a major fixture of sporting events for decades, including the AFL Grand Final, the Melbourne Cup, the Summer Olympics and the Brownlow Medal.

In 2017, McAvaney revealed he had been diagnosed with chronic lymphocytic leukaemia. Accepting the Hall of Fame Gold Logie, McAvaney described the world of modern sport as “real-life, do or die drama. It’s been a privilege to be there as it happens, and to tell you about it.“