There’s a good chance you shared a beautiful Valentine’s Day with your boo and you simply want to keep the celebrations going past Feb. 14, maybe your date went a little south after dessert last night, or you might just be totally over it all. Regardless of how you’re feeling about the most romantic day of the year, though, you can get your hands on an entire spread of candy bars for free, and what’s better than free candy? So here’s how to get a Creamy Snickers Bouquet, if you’re interested.

A Snickers Bouquet? OK yes kweens, definitely count me in. And if you happen to be living in the one and only New York City, you’re in luck, because those in the Big Apple can enter to win a free collection of candy bars on Feb. 15. According to the press release, all you have to do to enter is tweet @SNICKERS, use the hashtag #SmoothItOver, and — of course — include the iconic chocolate bar emoji. Simple, right?

According to the press release, each bouquet is complete with all three new Creamy Snickers flavors, including Almond Butter, Peanut Butter, and Maple Almond Butter (yum!). Keep in mind that entries will only be valid until 11:59 ET, and since they’re first come first serve, per Snickers, you’ll want to get in on that ASAP. There are only so many bouquets (100, to be exact) so you’ll definitely want to be one of the first in the starting gate. 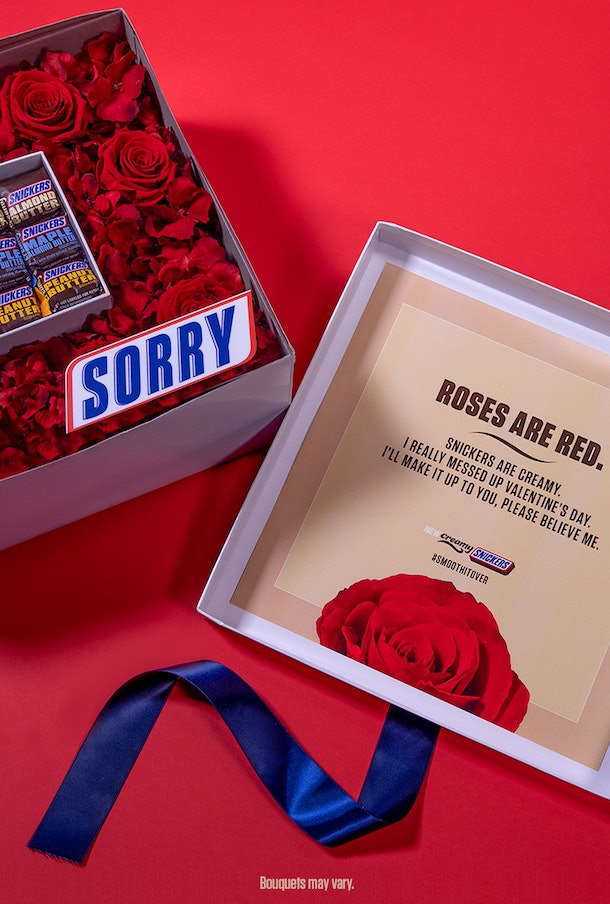 On the other hand, if you don’t live in New York City, or if you missed the boat on entering for a bouquet, don’t worry about it — seriously. According to the press release, you will still be able to get in on one of 500 digital coupons for Creamy Snickers, which is one of the greatest alternatives I can think of. Those are also first come first serve, per Snickers, so make sure to enter before supplies run out.

Josh Olken, Snickers’ brand director, said in the press release that the #SmoothItOver campaign not only celebrates any potentially tragic V-Day mishaps, but it also highlights the company’s new line of candy bars: Creamy Snickers.

According to the press release, Olken said:

If you haven’t tried Snickers’ new Creamy line, per the release, the candy bar’s classic crunch is essentially replaced with the trio of creamy nut butters displayed in the bouquet. They still include that signature caramel and milk chocolate coating, sans the chunkiness. They sound pretty tasty, don’t they?

There’s a lot to love about Snickers, especially when they come in the form of a bouquet. No matter how your Valentine’s Day went down, there is literally no reason you shouldn’t get in on an opportunity for free candy. So if you couldn’t tell, I’m definitely down to enter. I mean, real talk: Nothing smells better than a bouquet made of chocolate.