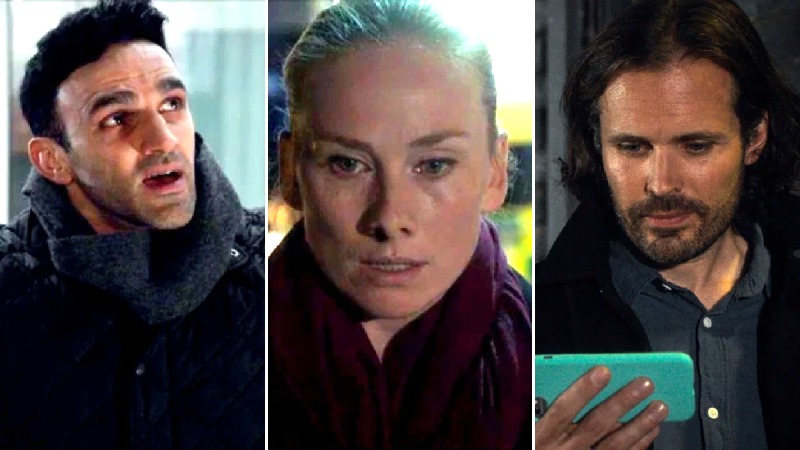 Sammy Carrington (Oscar Wilkins) was finally cured of his cancer in tonight’s Holby City. He’s been through so much at that hospital, and at one point he packed his little bag and tried to leave. He’d seen a video of the operation he was about to undergo online, and it hadn’t filled him with confidence.

Oliver Valentine (James Anderson) sympathised with his fear of not knowing if he’d ever wake up again and told Sammy he’d once been shot in the head. ‘So you’re like Iron Man?’ Sammy said. ‘Bullets are lead, so… Lead Man,’ said Ollie. Sammy was convinced to have the surgery.

This wasn’t the only positive thing Ollie did for Sammy in the episode, as he also spotted that Eli (Davood Ghadami) was about to make a mistake during his operation, and had to scrub in when Eli got the shakes and couldn’t continue.

Hanssen (Guy Henry) was so impressed that he suggested it was about time Ollie came back to surgical training full time. Ollie said no. He realised that he wasn’t recovered from his PTSD and needed to concentrate on his recovery and on being a good father to his son.

We saw him leave Holby, en route for America and Zosia (Camilla Arfwedson making a cameo appearance) and their son Arthur.

On his way out he passed Nicky McKendrick (Belinda Owusu) on her way in. Was she just visiting to show off her baby to her friends, or is she ready to come back to work?

The reason that Eli was uncharacteristically wobbly during surgery was that he and Amelia (Lucy Briggs-Owen) had just discovered that their unborn baby was no longer alive. This was devastating news, and in a heartbreaking scene Amelia lit a candle for the baby. ‘I’ve gotten used to our little chats,’ she told it. ‘Now where do I find you?’

The pain of the loss threatened to pull Eli and Amelia apart, but Josh (Trieve Blackwood-Cambridge) was on hand for some wise advice for Eli. Josh has started learning about opening up and facing your pain, and he encouraged Eli to talk to his wife about how he was feeling.

No wonder that Ange (Dawn Steele) decided to propose to Josh – he really is a lovely man. When she went down on one knee in the hospital garden he initially said no. He didn’t want to burden Ange with his bulimia when she had so much else to worry about. She reassured him that he was more of a help than a hindrance to her life, so he got down on one knee and proposed to her in turn.

There was also romance in the air for Kylie (Amy Murphy) and Louis (Tyler Luke Cunningham), following some comic relief with a ‘battery powered massager,’ which fell, vibrating, into the hands of Max (Jo Martin), much to everyone’s amusement. Because Louis knew that Kylie had only innocent intentions when she bought the item, she realised that they’re both on the same wavelength and told him she loves him. Well, how could you not?

And Carole continued to show Dominic (David Ames) that she loves him from beyond the grave, by leaving a box full of letters for him to read at every key moment in his life – even his 100th birthday. She’d even chosen what song she wanted playing at her cremation: Disco Inferno!

So the episode ended on a fairly positive note – but not for Jac Naylor (Rosie Marcel). As the choir sang carols around the tree, Jac had a bit of a funny turn and her nose started bleeding. It’s not looking good for Jac.