Revealed: How ‘girly girl’ Holly used her collection of BOOTS to toughen up her signature feminine style for the jungle – and how to introduce them to your wardrobe, too

Holly Willoughby has caused a sensation with her I’m A Celebrity… wardrobe – but its not just her must-have dresses and stylish separates that have had fans talking.

Much has also been made of the presenter’s extraordinary collection of boots – with Holly donning a pair for every day in the jungle. 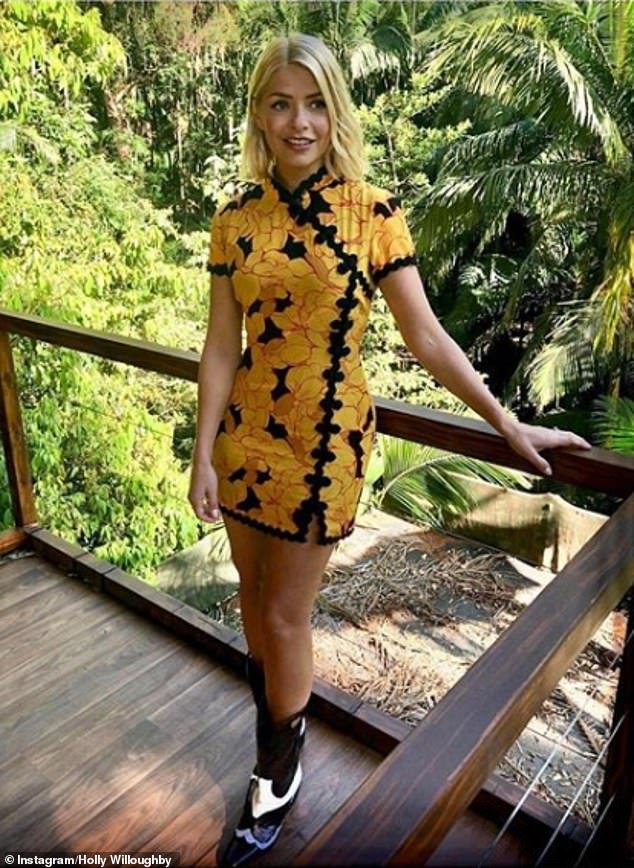 Stepping out of her comfort zone: Holly wore a feminine printed mini dress by cult label De La Vali on day six, which she paired with £460 Marlyn western leather boots by Ganni

Speaking to FEMAIL, celebrity stylist Rochelle White said the jungle looks marked a significant departure for Holly – but they proved no less popular than her This Morning ensembles.

‘It is nice to see Holly take a little step away from her comfort zone and take a risk in her fashion choices for I’m A Celebrity…,’ Rochelle said. We tend to see her in more girly looking outfits and heels.

‘This has been a welcome change and a side to her that we aren’t used to. Her look has been very popular and many of the styles that she was wearing sold out.

‘That shows that her style is highly watched and her influence is strong.’

Holly wore a number of heavy leather combat and hiking-style boots with thick laces and chunky heels – perfect for keeping her footing on uneven jungle terrain. 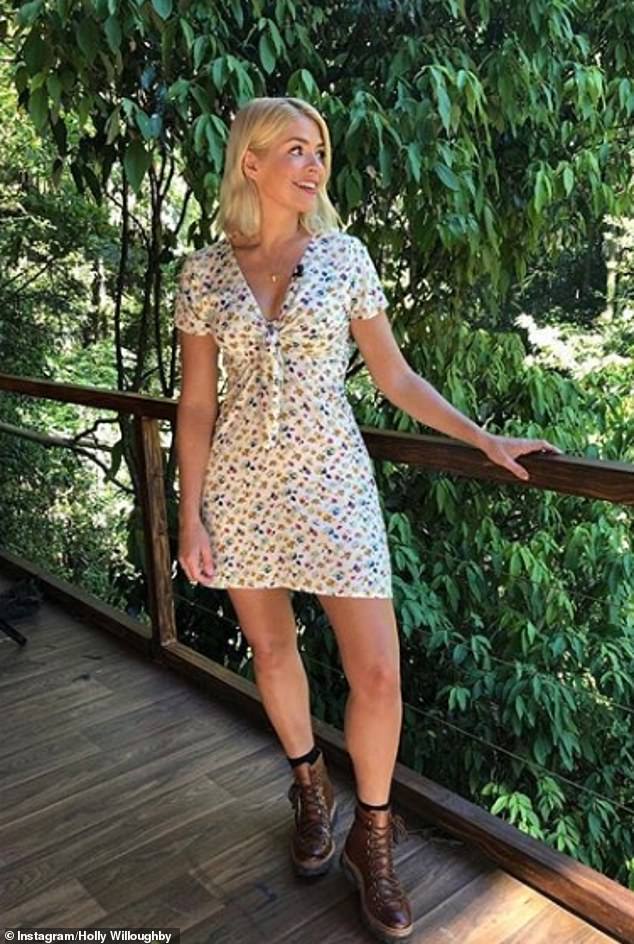 Cool girl style: Holly paired the £255 Grenson Nanette hiker boots – a go-to shoe for the series – with a pretty floral dress on day 11 in the jungle 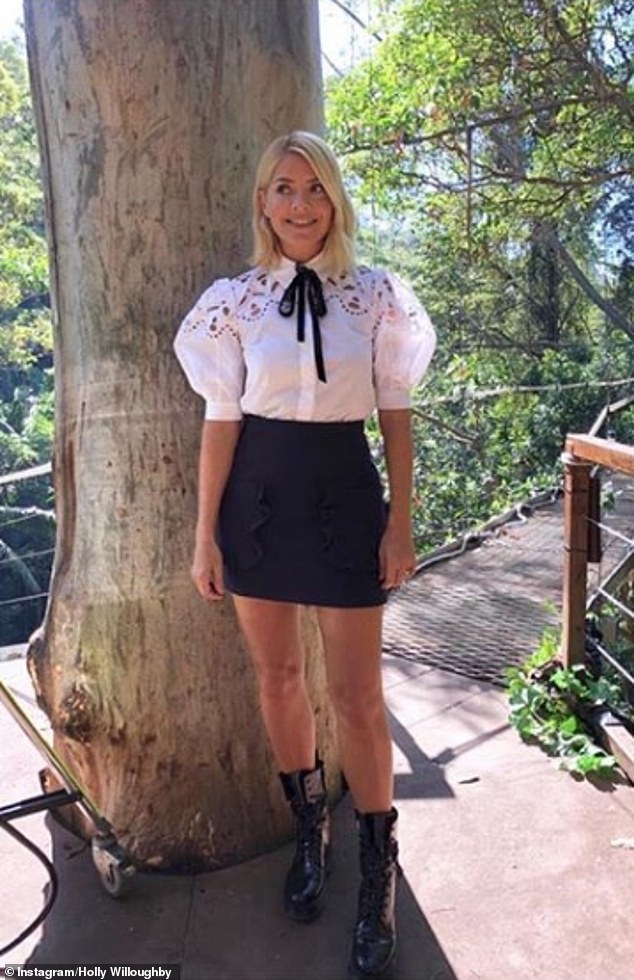 Action woman: The TV queen wore a number of combat boots, including this pair from upmarket brand Maje. The boots gave a jungle twist to Holly’s signature feminine looks

Among the biggest hits were Holly’s two pairs of £255 Nanette hiking boots from British brand Grenson, which have sold out in both colours.

The £295 Heidi Boots by Camilla Elphick have also been snapped up in all sizes.

Rochelle noted that the styles are often being created around the boots, allowing them to be the main focal point of the outfit.

While Holly is certainly leading the way with the dress and boots combinations at the moment, she is not the first star to have tried out the look. 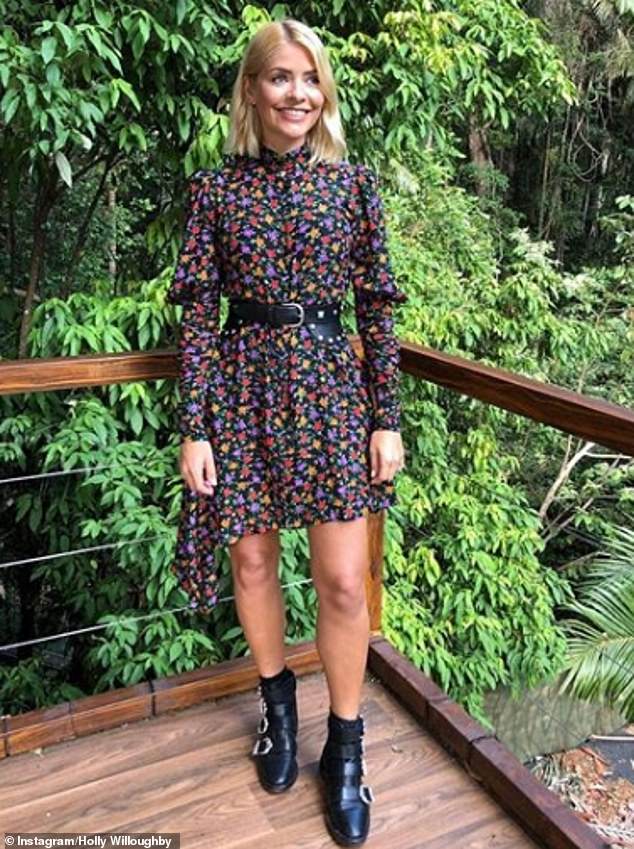 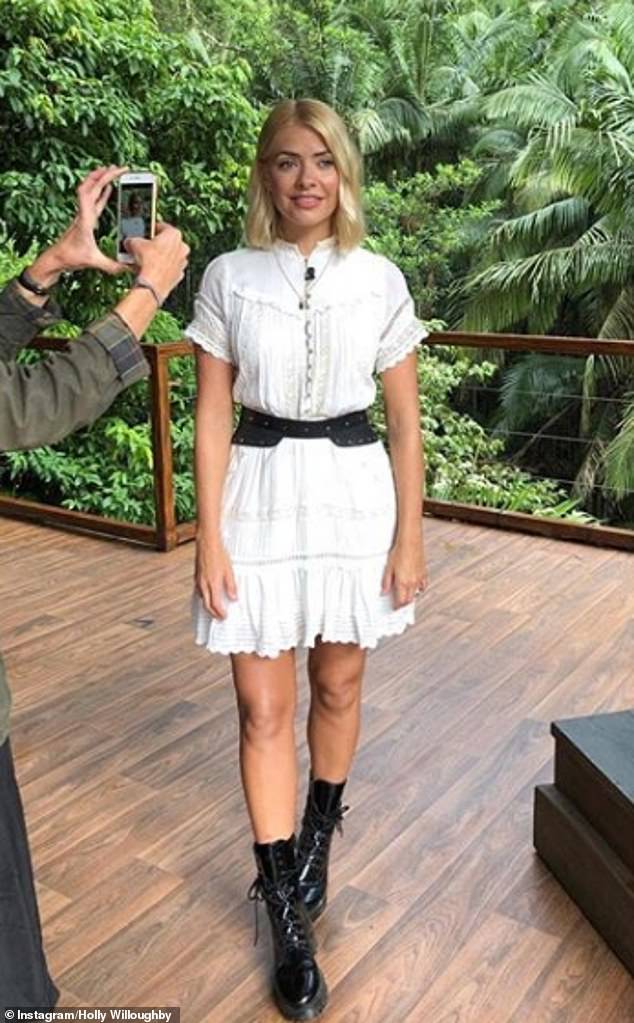 Hard and soft: Holly wore a pretty white frock by Spell & The Gypsy Collective on day 21, which she teamed with her Maje leather boots

‘Walking boots and Dr Martins for example have seen a resurgence within fashion.’

Although Holly turns to stylist to the stars Angie Smith to pull together her looks, it is one that is surprisingly easy to try at home.

Rochelle explained: ‘There are various ways to create and wear this look. The best way is to know what looks good on you first and foremost and then pick items that represent that. For example, a fitted Tee with a well fitting skirt.

‘One of my other favourite looks would be T-shirt or jumper dressers with a belt – depending the fit – around the middle and a fitted flowing maxi dresses teamed with a belt and boots.

‘All these looks can be either casual or dressy but can be tailored to what makes you look and feel good.’