Prime Minister Scott Morrison says home quarantine for vaccinated return travellers may become a reality from the second half of the year as he prepares for a meeting with state and territory leaders that will scrutinise the vaccine rollout and pandemic control measures.

Mr Morrison said the prospect for creating mass vaccination centres to help immunise those aged 50-70 would also be canvassed in the first of the new bi-weekly national cabinet meetings on Monday. 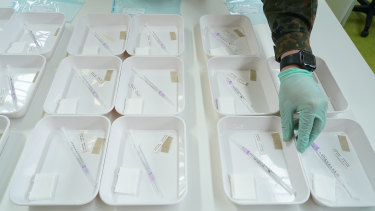 Mass vaccination sites are being considered earlier in the rollout, in a bid to speed the program up.Credit:Getty

Speaking in Adelaide on Sunday morning, the Prime Minister said it was not a matter of taking supplies off GPs, but rather boosting supplies to states as more doses arrive in the country.

“I know some states are very interested in supporting larger vaccination programs now for people aged 50 to 70 and we are very open to discussing that with the states and looking forward to that discussion tomorrow,” he said.

“What I stress as that process would be to supplement in addition to what the GPs are doing.”

Almost 1.5 million vaccine doses have been administered across Australia so far during the rollout, including just over 22,000 on Saturday.

GPs have delivered more than half, and Health Minister Greg Hunt confirmed on Saturday the government was considering adding Pfizer to the GP rollout. That position comes after the Therapeutic Goods Administration approved it for storage at normal freezer temperatures for up to a fortnight, or up to five days in a normal fridge.

Pfizer has been limited to state hospital hubs and the aged care resident rollout, but the country is now expecting to receive 40 million doses of that vaccine as the government moves away from AstraZeneca’s vaccine for those under the aged of 50.

Australia was not in a rush to reopen borders, the Prime Minister said, but in a few months he expects vaccinated people who are allowed to travel for essential purposes to be able to return without a stay in hotel quarantine.

“The issues of borders and how they are managed will be done very, very carefully, and must be done in partnership with the states and territories in terms of how the quarantine program works,” he said.

“If we can get in a position in the second half of the year where Australians for essential purposes can travel and return to the country without going into hotel quarantine, if they have been vaccinated, it is a good incentive to get vaccinated.”

That would also free up hotel quarantine for essential workers to enter the country, Mr Morrison said.

“Potentially, we can do more with other populations in a very controlled and very safe way. The idea that on one day everything is opening, that isn’t how this will happen,” he said.

“It will happen cautiously and carefully, working very hard on the medical and health protections in place because I’m not going to put at risk the way that Australians are living today.”