After hearing just three hours of arguments later this month, a bench of High Court judges may rule on a defining free speech question: what right do scholars and scientists have to say unpopular, even offensive, things?

It is the peak of a five-year battle for the man at its centre, Peter Ridd, who was fired from his job as a physics professor at James Cook University after attacking the scientific consensus on climate change and the Great Barrier Reef. 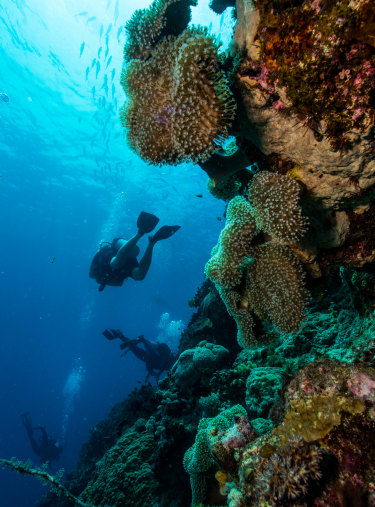 The vast majority of experts fear climate change will do irreparable damage to the Great Barrier Reef — soon.Credit:Jason South

The dispute has thrown together unusual allies and big names, with the left-wing National Tertiary Education Union lining up behind Ridd alongside the libertarian Institute of Public Affairs. Rugby union player Israel Folau’s barrister is arguing the case for Ridd against Christian Porter’s legal eagle, who is representing university. Government MPs have their eyes on the case.

After a string of warnings, vice-chancellor Sandra Harding fired Ridd in May 2018 for breaching the university’s code of conduct. 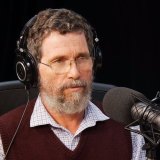 Peter Ridd will go to the High Court hearing in person along with a group of supporters who are grateful for his research.Credit:Facebook/Peter Ridd

He was a controversial figure at the university, having put his name to a letter arguing that “the case for alarm regarding climate change is grossly overstated” and arguing the Great Barrier Reef is in far better health and more resistant than the vast majority of his peers say. (A report from the Australian Academy of Science released earlier this year, for example, found the reef’s coral faced almost total destruction unless the world takes “transformative action” on climate change.)

The university took exception with an interview Ridd gave to the News Corp-controlled Sky News channel in 2017 in which he claimed people can “no longer trust” some of his colleagues’ work on the reef from academic centres involving the university.

The university also objected to a 2015 email sent to a News Corp journalist in which Ridd said some colleagues would “wiggle and squirm” when their errors were found out. And it had problems with his disclosure of the disciplinary process against him on his own website and to The Australian newspaper and claims he had been fired for his academic views.

His actions were “disrespectful and discourteous” and “threatening and insubordinate”, the university has told the High Court. Ridd was “failing to uphold the integrity and good reputation of the university” and “denigrating the university, its employees, including the complainant, and stakeholders” as well as failing to keep information confidential, it argues.

All those things, the university said, were breaches of its code of conduct and ultimately grounds for his sacking. But there is a second document at play: the university’s enterprise agreement, which is like a mass contract between the institution and its staff that sets out their rights. The interplay between the two documents is at the heart of the case. 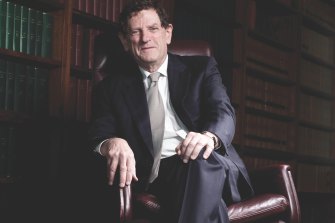 Former chief justice Robert French found there was no free speech crisis in Australia’s universities, but recommended a code to clarify protections.Credit:Nic Walker

Written arguments released by the High Court last week, which will frame the estimated three hours of live hearings this month, reveal sharply different views of how the two work together.

Ridd admits to some of the university’s claims against him. “I don’t blame [other academics] for feeling I was disrespectful or discourteous because I basically said their work was rubbish,” he told the Herald and The Age. “And I believe it.”

But according to Ridd and his lawyers, those statements were covered by Ridd’s right to academic or intellectual freedom, a foundational value for universities and one covered by the enterprise agreement.

They ask the High Court to find that there is a clear concept of “academic freedom”. According to Ridd’s written arguments, this concept dates back to Greek philosopher Socrates and was defended by the Victorian era Saint John Henry Newman — who wrote a famous text on The Idea of a University in the 1850s — and is applicable to Ridd today. He argues it allows him to say what he wants in his area of expertise so long as it does not “harass, vilify, bully or intimidate” and negates any of his transgressions against the university’s code of conduct.

That argument triumphed at the first court hearing, but went down at a second in which the Federal Court preferred James Cook University’s more technical approach, without the references to ancient philosophers. Its lawyers start with the two documents: the code of conduct and the enterprise agreement. That agreement, the university says, “does not confer any general right upon academics to intellectual freedom”. Instead, it “recognises the university’s commitment to act in a manner consistent with intellectual freedom and in accordance with its code of conduct.”

That distinction seems slight, but it is not. Rather than a right to intellectual freedom overriding the code of conduct, the university’s approach sees the opposite occur.

The code of conduct, instead, lets academics comment on their areas of expertise, but only as long as they do so within a set of extra constraints, including behaving within the bounds of “collegiality” and in “a responsible manner”, and “respect the rights of others”.

If that is right, then Ridd’s sacking is legitimate. It would be a boon to universities, which have to contend with staff spruiking views on the bleeding edge of academic discourse — or, depending on one’s view, outside it. Among them is the University of Sydney lecturer Tim Anderson who was fired for, among other things, imposing a swastika on an image of an Israeli flag to make a point about that nation’s treatment of Palestinians — conduct one Jewish organisation said was anti-Semitic. That case is now on appeal.

A James Cook University spokesman said the university “strongly supports the pursuit of intellectual inquiry and the freedom of staff to engage in academic and intellectual freedom”.

The university noted a previous court decision, which Ridd is appealing against, had found his termination had “nothing to do with academic freedom” but was instead triggered by the code of conduct breaches.

“There is little to be gained in resorting to historical concepts and definitions of academic freedom,” two judges said in that decision. “Whatever the concept once meant, it has evolved to take into account contemporary circumstances which present a challenge to it, including the internet, social media and trolling, none of which informed the view of persons such as [famous philosophers] JS Mill, John Locke, Isaiah Berlin and others who have written on the topic.”

But other academics working under similar codes of conduct, which union lawyer Josh Bornstein says “confer ridiculously onerous and vague obligations on all staff”, may have to bite their tongues on controversial topics if James Cook University wins.

Ridd’s plight has thrown together an unusual cast.

“It’s for [Ridd’s] academic counterparts in journals, in peer review, to look at the academic merits of his views,” the National Tertiary Education Union’s national president Alison Barnes says. “But as a union, we must defend the principle and stop employers acting punitively against staff who are genuinely exercising academic freedom.”

The Institute of Public Affairs seems to be relishing its role in the fight too, which it has made a free speech cause celebre. It has launched a podcast modestly titled The Heretic, a raft of other media, and helped with a series of community pages that have taken in about $1.5 million for Ridd to cover his legal fees.

“The Peter Ridd case will be pivotal for freedom of speech in Australia,” says the institute’s policy director, Gideon Rozner. ”It will decide whether disagreement is settled by rigorous debate, or sanctions and censorship.“

Bornstein, the Maurice Blackburn lawyer who has also acted for the union, says the right’s interest in the case is fraudulent.

That may be true of some on the right, but it can hardly be applied to the IPA, which has backed the free speech rights of Dr Anderson, the Safe Schools founder Roz Ward and Unions NSW. “You could hardly describe [them] as ‘right-wing polemicists’,” Rozner says.

It has not pursued those cases anywhere near as vigorously as Ridd’s though, perhaps because his work on the reef dovetails neatly with the Institute of Public Affairs’ opposition to stronger action on climate change, such as a net zero emissions target.

The ‘bulldog’ and the ‘best’

Perhaps the Institute of Public Affairs’ greatest contribution to Ridd’s case has been finding his barrister, Stuart Wood, QC. “I’d read about [Ridd’s case] in the press but I hadn’t had much understanding of what was going on,” Wood told the institute’s podcast. “[Institute boss] John [Roskam] rang me and asked to help, so I did.”

Known in legal circles as a pillar of the conservative Melbourne world with a reputation for taking on some of the nation’s largest and most militant unions, Wood now finds himself acting for an employee. 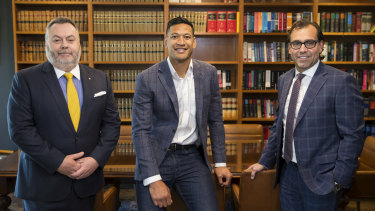 It is not his first free speech rodeo, however. He was the legal “bulldog” for Folau in his successful battle against Rugby Australia’s decision to fire the sports star for posting on Instagram that gay people and “fornicators” would go to hell unless they repented.

George Haros, a partner at the law firm Gaden’s, who worked with Wood in that case and several others, describes him as an exceptional legal and commercial mind with a talent for exploring all avenues in a case. “And,” says Haros, “he is a lot of fun.”

On the other side, the university has hired one of the country’s best barristers, Bret Walker, who won Cardinal George Pell’s freedom and now represents Mr Porter in his defamation claim over historical rape allegations.

At least for legal enthusiasts, the three-hour hearing in Canberra will be worth watching. Ridd will be there with his mum.

Federal Education Minister Alan Tudge says he can’t comment on the case but, like a host of other Liberal MPs before him, is looking at the issues underlying it.

In March, the government legislated to require universities to support “freedom of speech” and “freedom of academic inquiry” as recommended by a review undertaken by former chief justice of Australia Robert French. All universities had previously agreed to do that based on a model code French had proposed, but a government report showed that in December last year, six had not done so. That included James Cook University, though it has since implemented a standalone academic freedom policy.

“I am growing impatient with those universities who are yet to align with the French code,” Tudge said.