Regal mischief makers! How the Queen’s seven great-grandchildren have delighted royal fans in 2018 with their VERY cute antics – including Charlotte poking her tongue out and Mia Tindall devouring ice cream

The royal brood is fast expanding, with the Queen and Prince Philip currently able to count seven great-grandchildren – and with Meghan and Harry also in the family way, that’ll soon rise to eight come early 2019.

Growing up fast, the youngest members of The Firm – ranging from six-month-old Lena Tindall to nearly-eight Savannah Phillips – have been on fabulous form all year, spotted out and about at royal weddings, polo matches and equestrian competitions.

And, much to the delight of royal fans, the super-cute new generation of royals seem to take a very relaxed approach to the cameras that have become part of their young lives.

From Prince George stifling a laugh in the ethereal confines of St George’s Chapel on Meghan and Harry’s wedding day in May to seven-year-old Savannah Phillips enthusiastically waving her hands around on the Buckingham Palace balcony during the annual Trooping the Colour celebrations in June, this gang of grinning youngsters are winning new fans with their cheeky grins, funny faces and boundless energy. 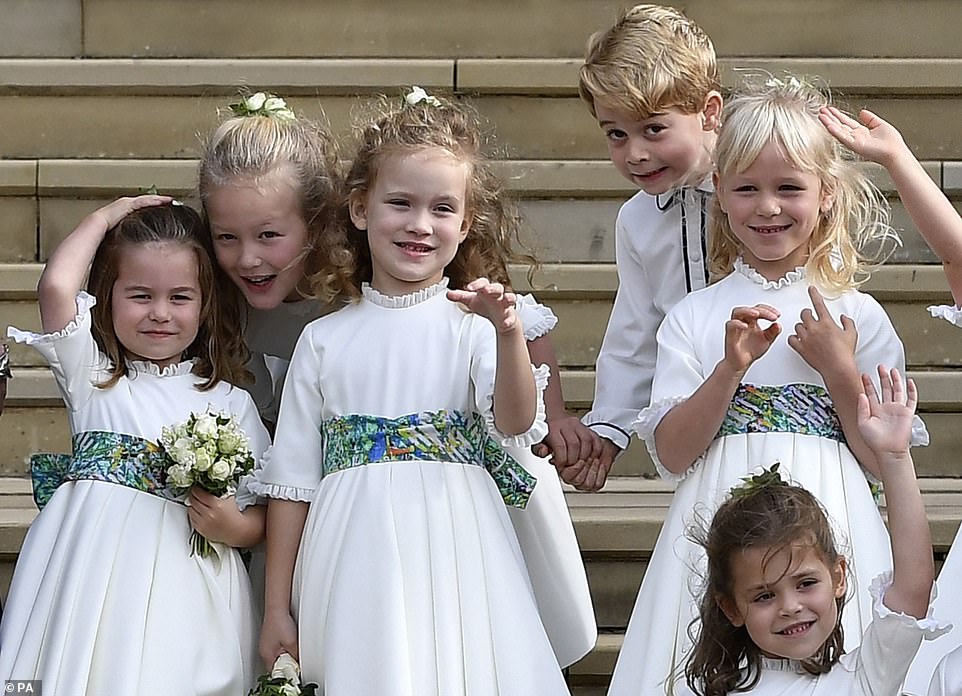 Princess Charlotte, far left, three, and Prince George, far right, stole the show at the Duke and Duchess of Sussex’s wedding on May 19th 2018 as they pulled faces for the camera while posing with other bridesmaids 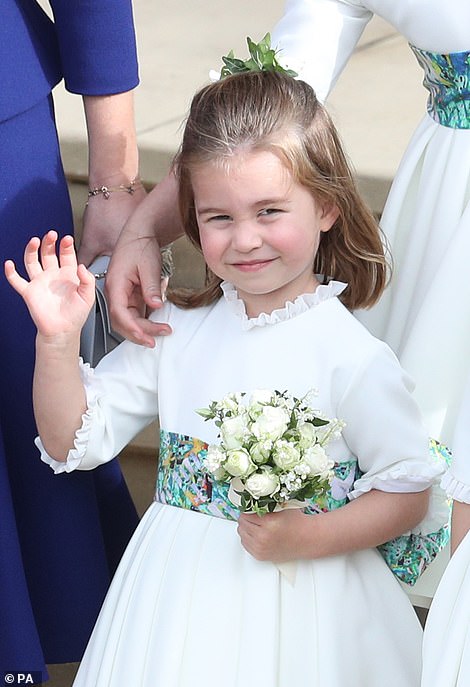 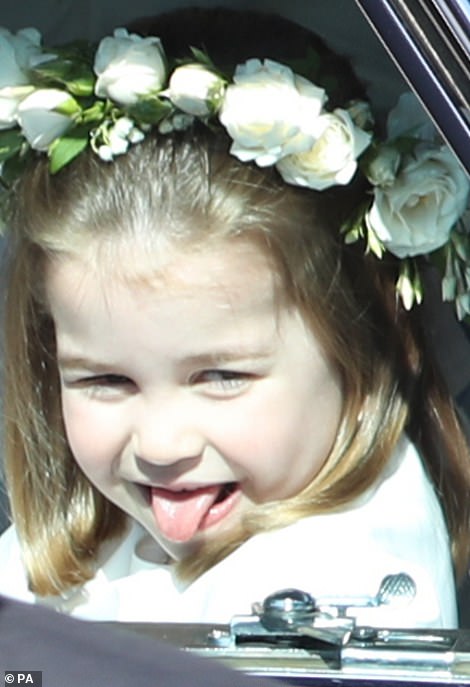 Angel to mischief-maker! Princess Charlotte, the three-year-old daughter of Kate and William is known for her relaxed approach to the camera lens. While she manages an adorable wave on the steps of St George’s Chapel at Harry and Meghan’s wedding, she also couldn’t resist sticking out her tongue at photographers 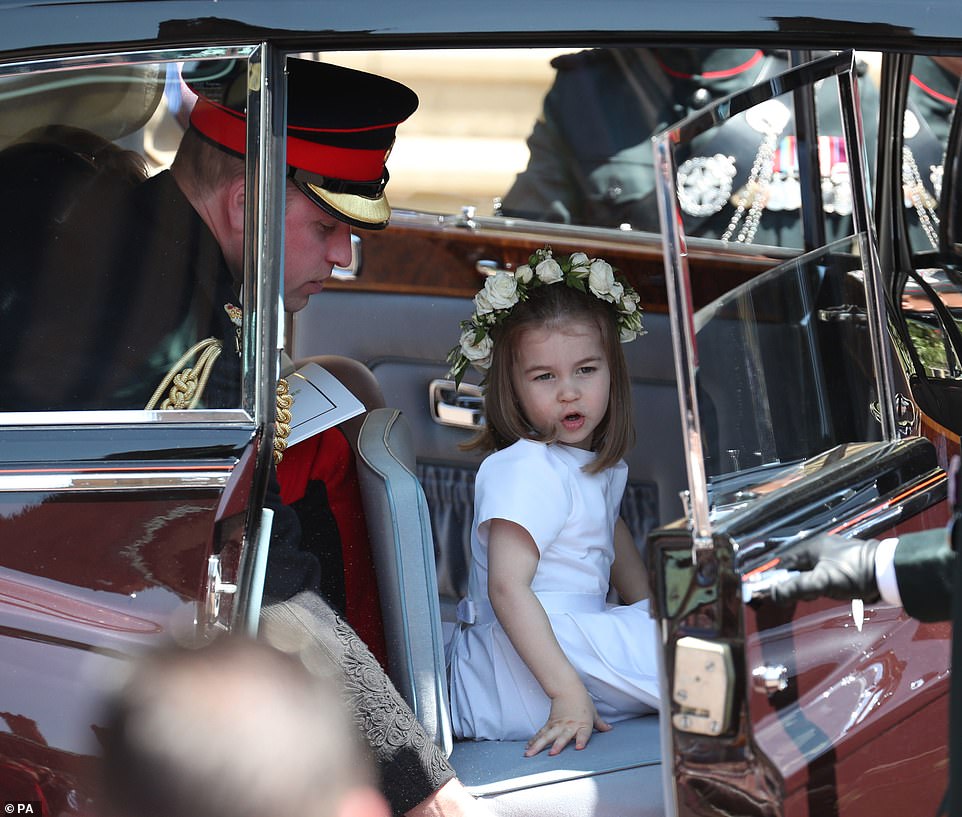 Fit for a princess! Charlotte exits the royal car after leaving Windsor Castle on May 19th, as dad William holds the door open for his daughter 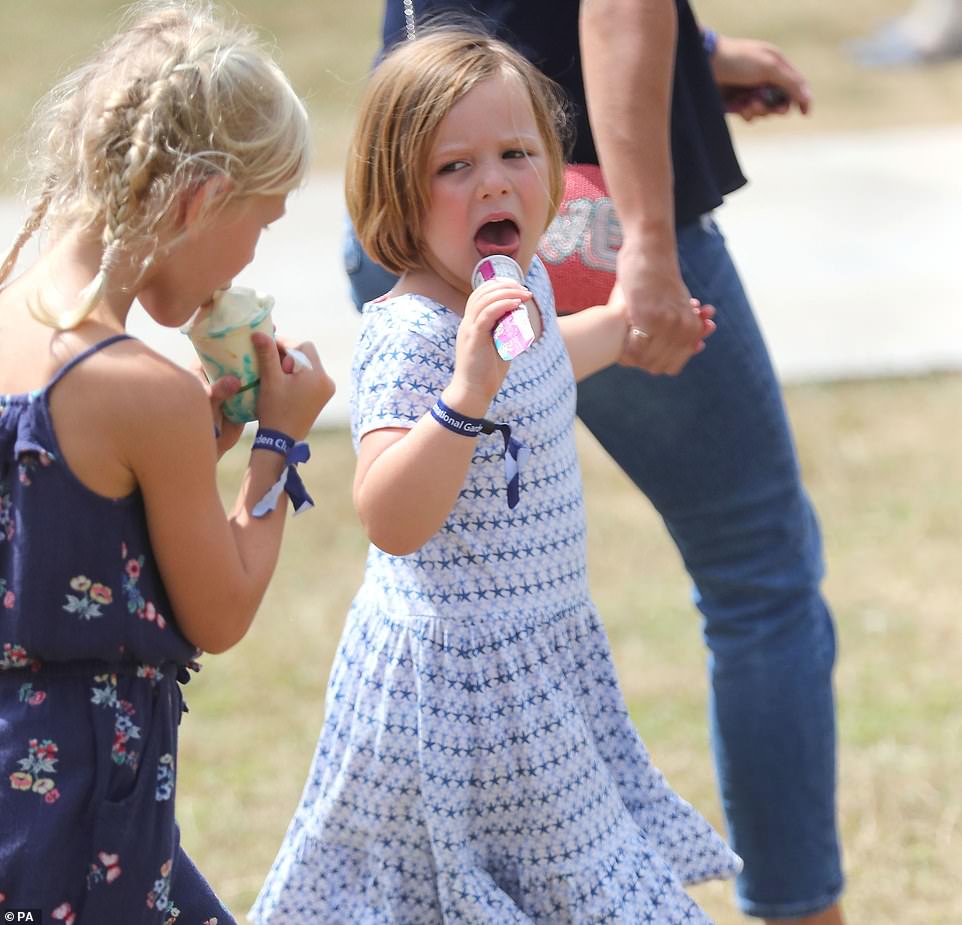 Yum! Peter and Autumn Phillips youngest daughter Isla Phillips, left, six, and Mia Tindall, four, slurped and walked as they attended the opening day of the Festival of British Eventing at Gatcombe Park in August 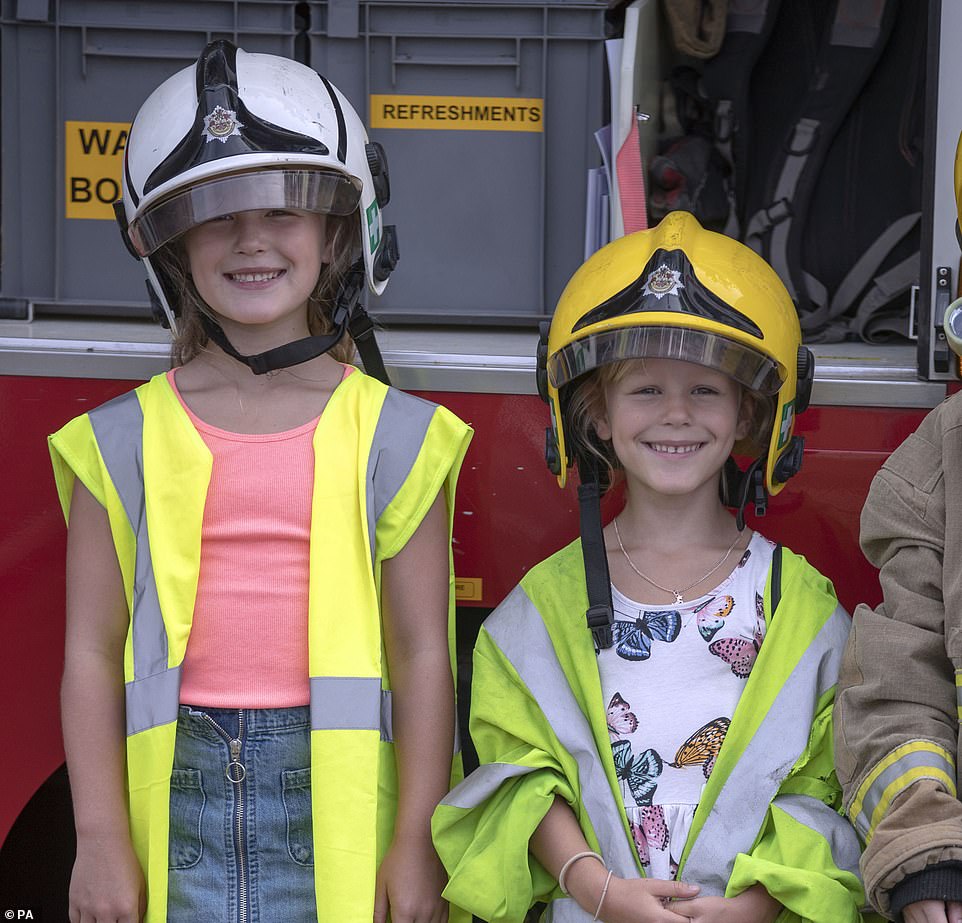 Future career? Autumn and Peter Phillips’ daughters Savannah, left, seven, and Isla, six, enjoy a dressing up session at Gatcombe Park, posing in the summer heat in their firefighters’ uniform

Savannah, who is Peter and Autumn Phillips’s eldest daughter, also helped to comfort Princess Charlotte when the youngster got upset during the appearance.

Savannah happily charged around with her six-year-old sister Isla and cousin Mia Tindall at the Gatcombe Horse Trials.

The Phillips sisters also had fun trying on firefighters’ uniforms at Gatcombe Park, posing together with big grins on their faces as they wore the over-sized safety helmets and jackets.

It was bridesmaid Savannah who had pageboy Prince George trying to stifle his laughter during Princess Eugenie’s wedding when she entertained him by pretending to play the trumpet in St George’s Chapel.

Also among the young helpers were Charlotte, Isla, Mia and Maud Windsor – the granddaughter of Prince and Princess Michael of Kent. 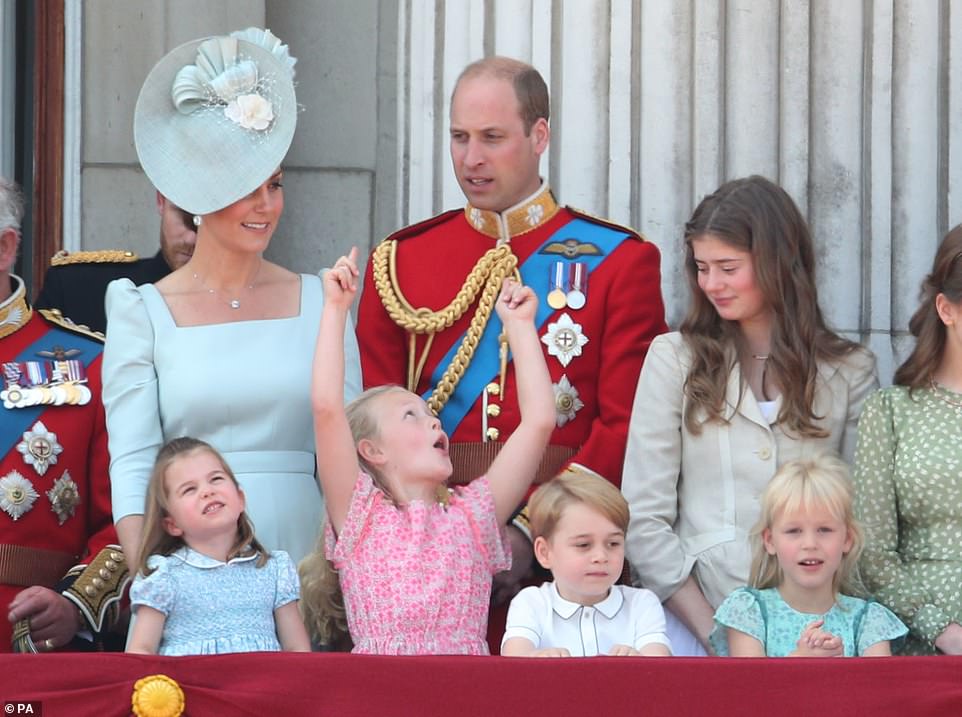 Hands in the air if you’re having a good time! A spirited Savannah Phillips raises her arms aloft, in full view of the nation on the royal balcony at this year’s Trooping the Colour in June. Bottom left, Princess Charlotte is more interested in the plane’s flying by, while Prince George, second from right, has his eyes on the crowd 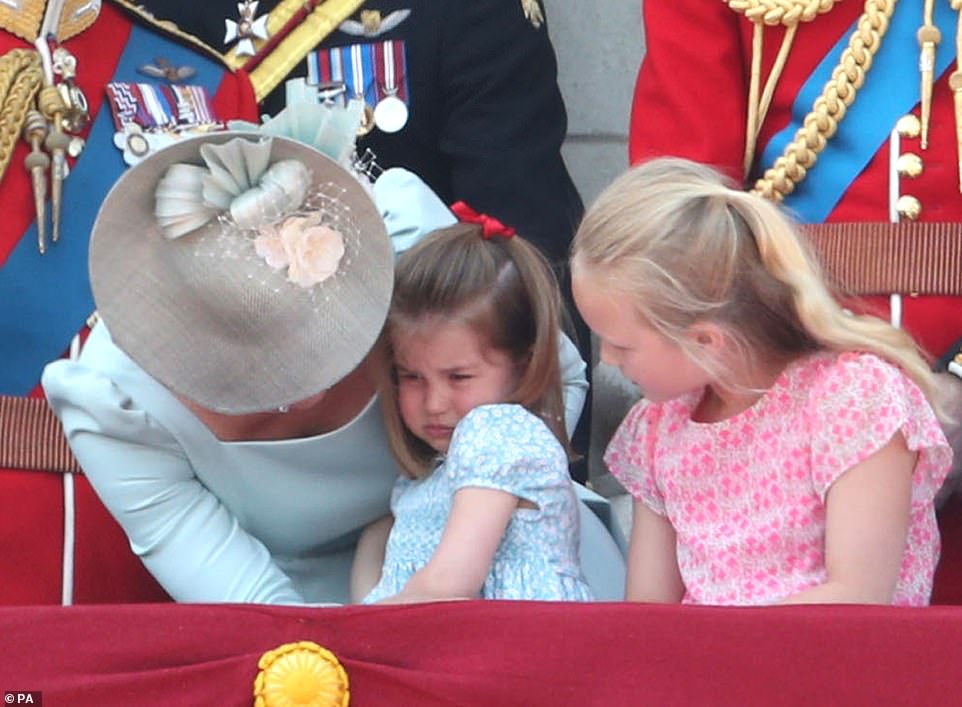 Savannah proved she also has a sensible side, turning to comfort her young cousin Princess Charlotte who appeared upset while posing with the royal family on the balcony at Buckingham Palace 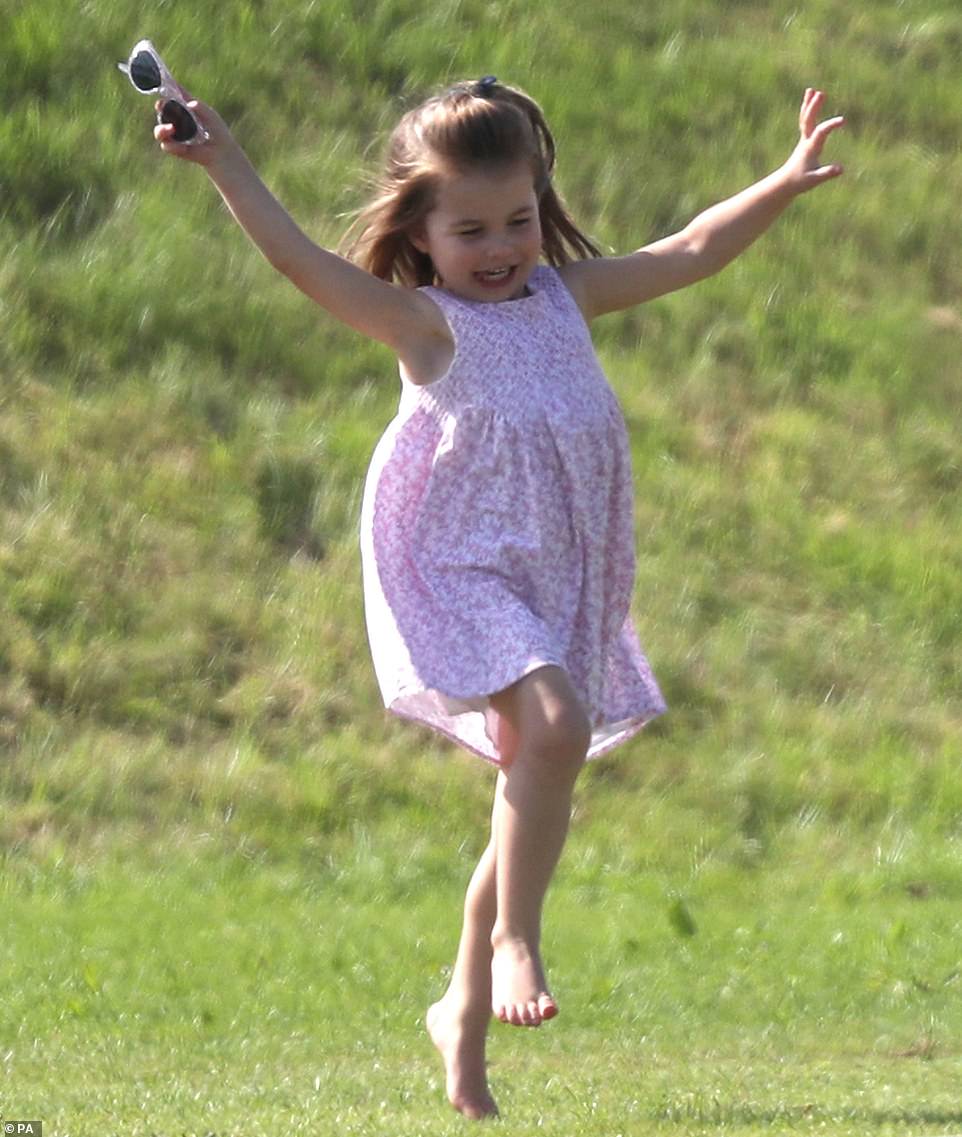 The long hot British summer saw Princess Charlotte frolicking bare foot on the grass as she watched her dad, the Duke of Cambridge, take part in the Maserati Royal Charity Polo Trophy at the Beaufort Polo Club in Tetbury 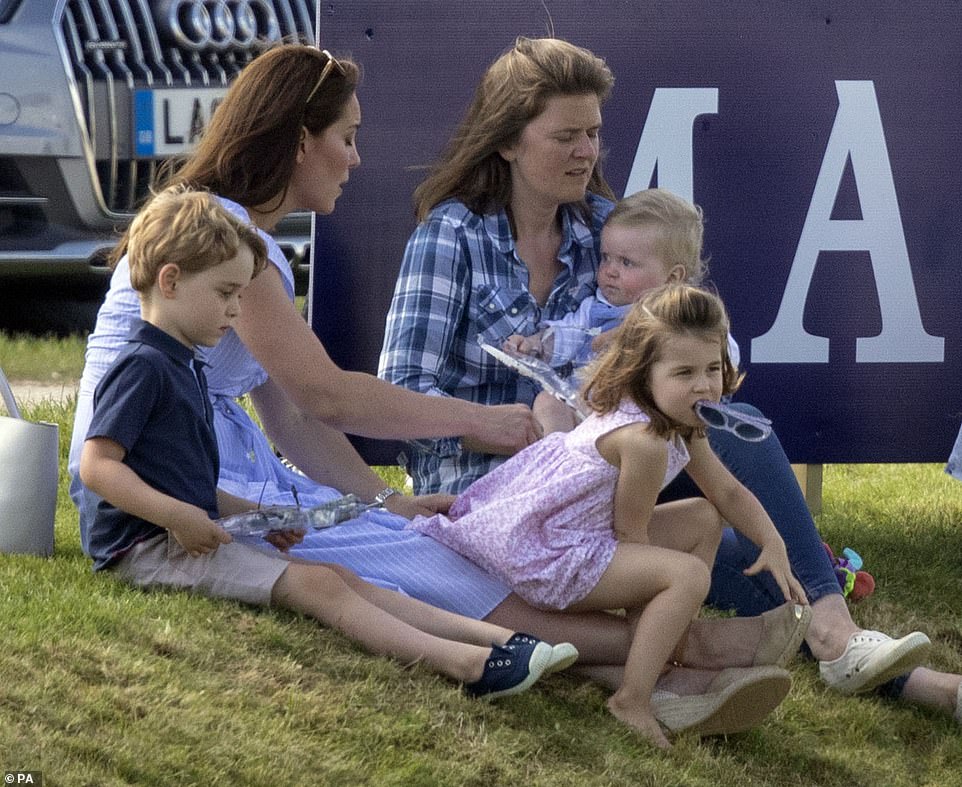 Just like any other mum: The Duchess of Cambridge takes her spot on the hill while Princess Charlotte, wearing a sun dress and biting her sunglasses, makes a bid for freedom as Prince George watches on 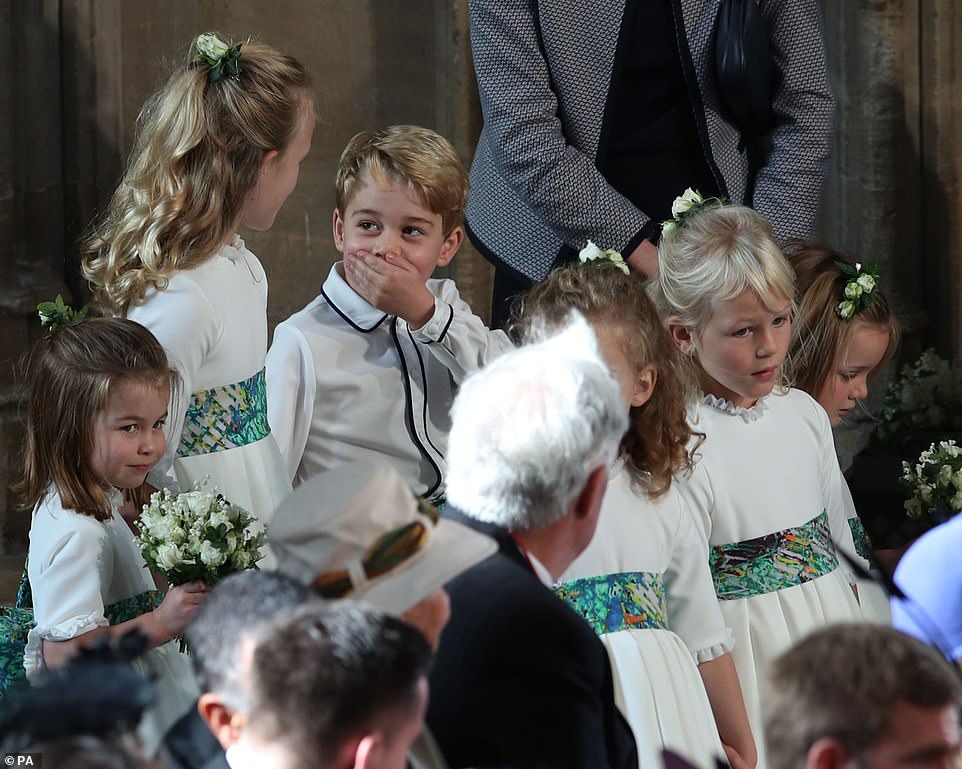 Tee-hee! Prince George, the eldest son of Kate and William, stifles a laugh in the regal surroundings of St George’s Chapel as his uncle Harry prepares to wed Meghan 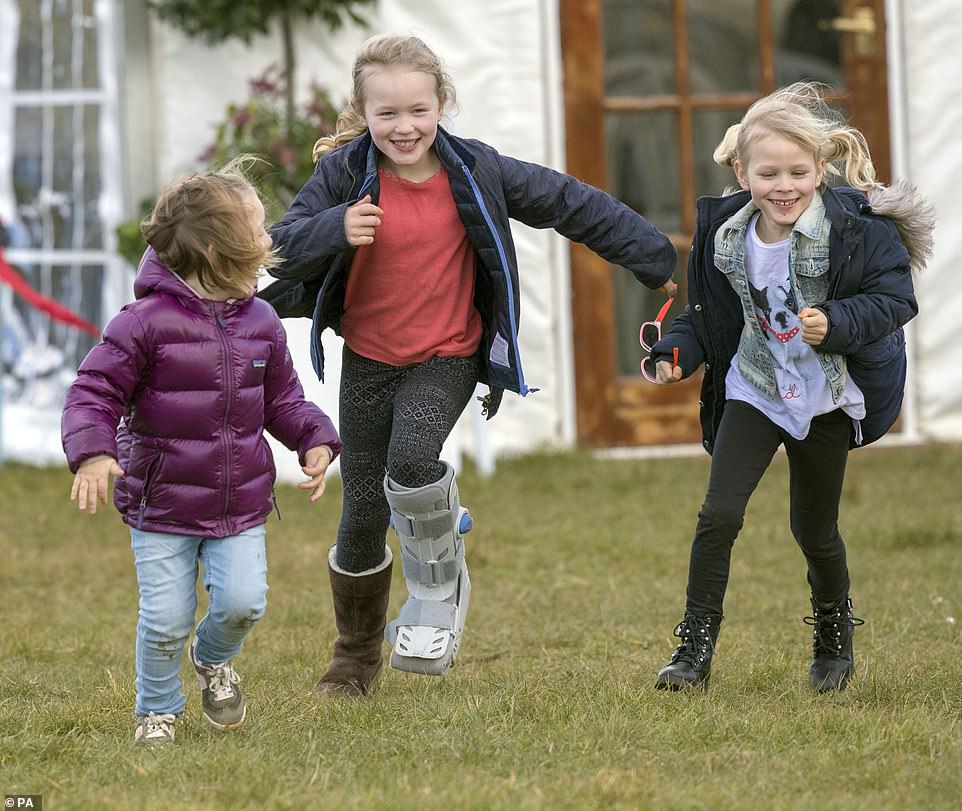 A broken ankle didn’t stop Savannah Phillips, centre, racing along with her cousin Mia Tindall, left, and sister Isla at the Gatcombe Horse Trials back in March 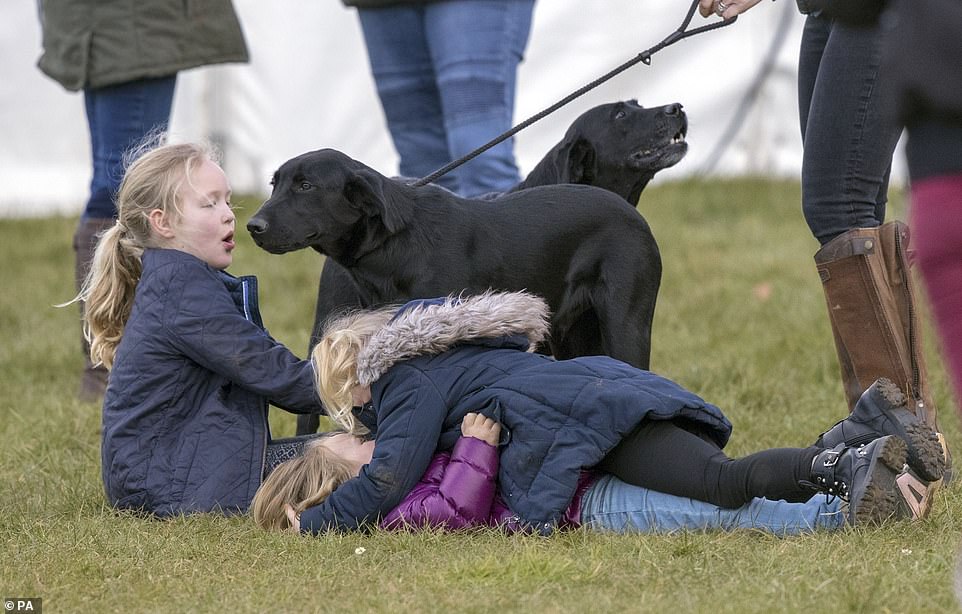 On the same day, the cousins roll around on the grass laughing and snuggle up to a pair of black labradors 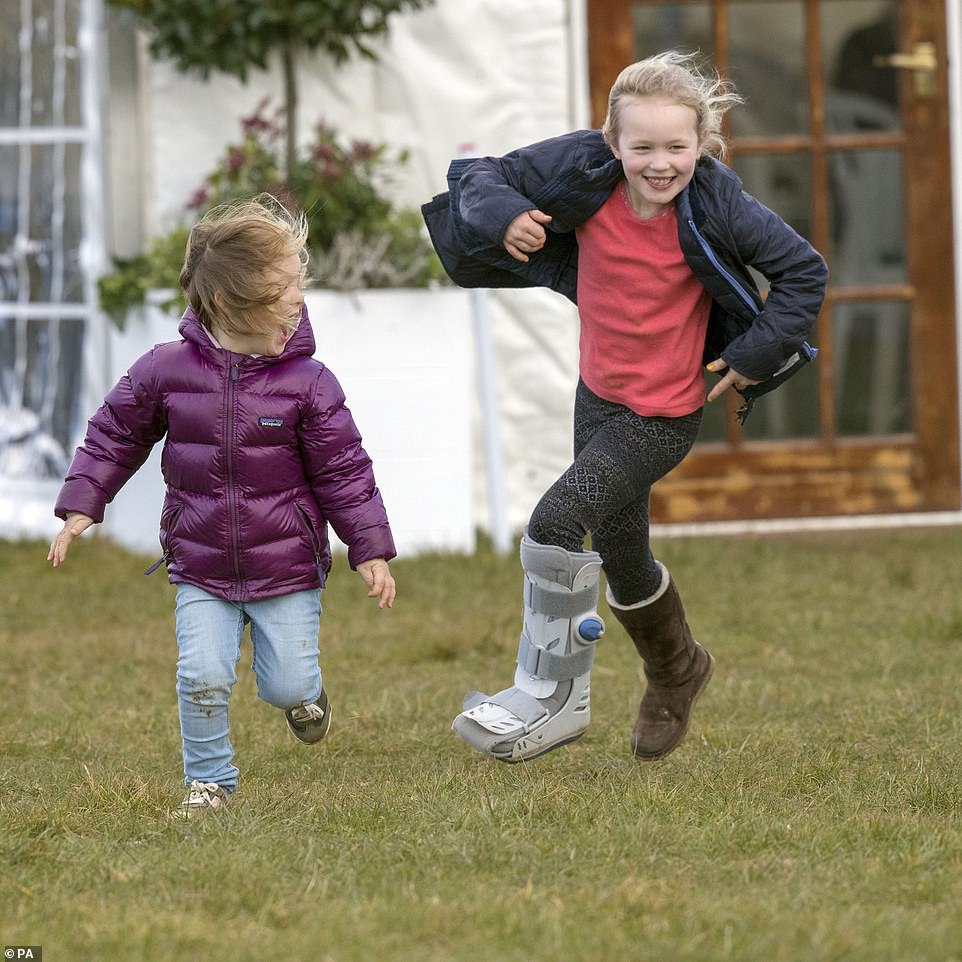 Can’t catch me! Savannah Phillips races after little Mia Tindall at Gatcombe Horse Trials in March, her speed clearly not being hampered by her leg brace 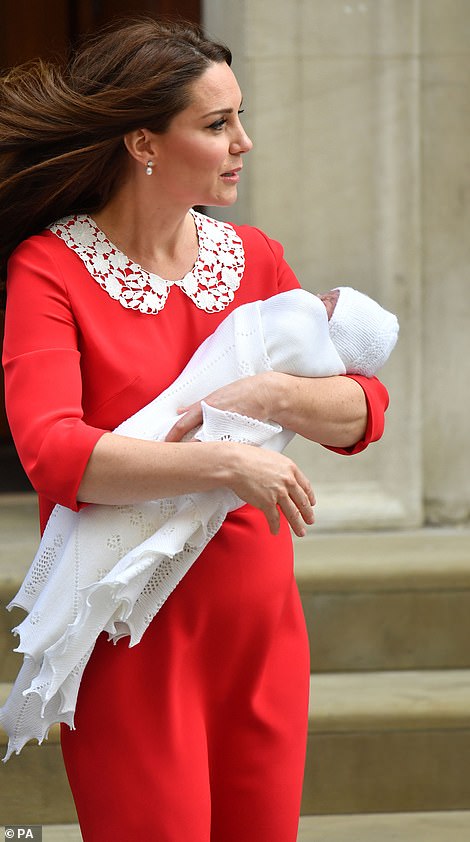 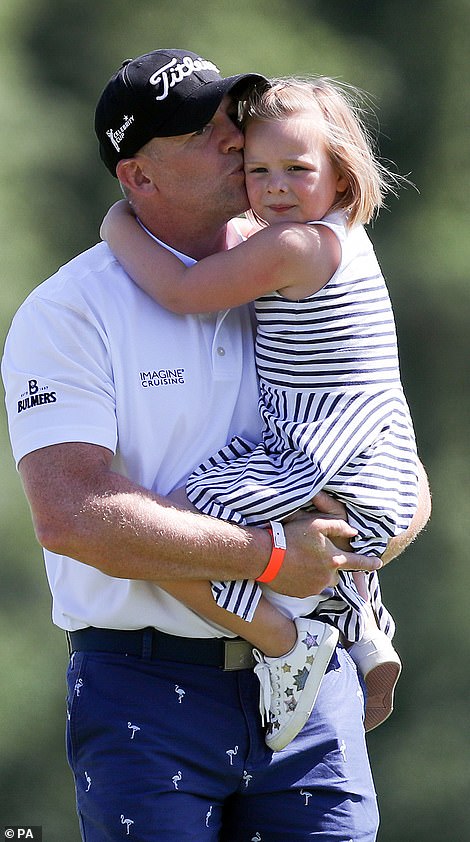 The newest addition! The Duchess of Cambridge pictured with newborn son Louis outside the Lindo Wing at St Mary’s Hospital in Paddington shortly after his birth on 23rd April. Right, the Tindall family also welcomed the Queen’s seventh great-grandchild – baby Lena, six months – who is sister to Mia, three, pictured with her father Mike 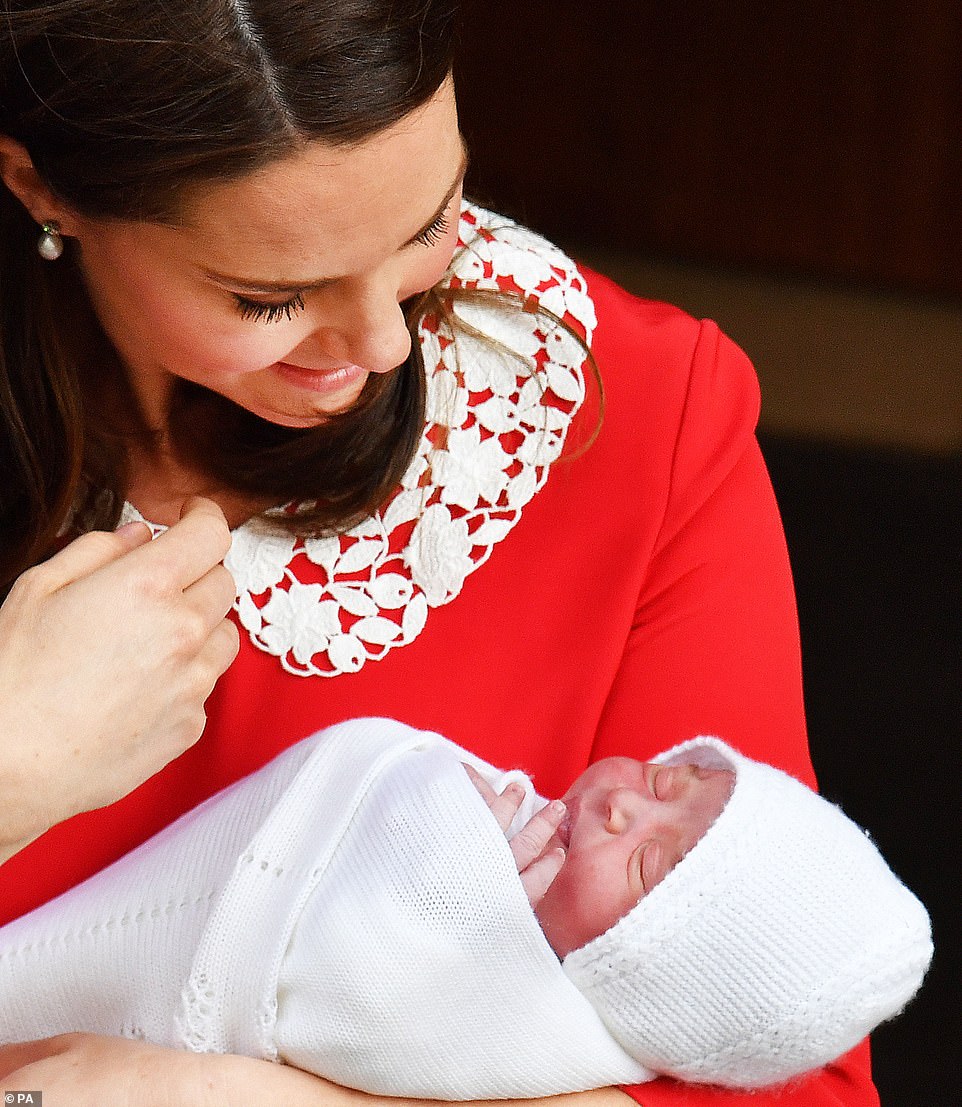 Little Louis, now eight months’ old, melted hearts during his first appearance on the steps of the Lindo Wing, appearing to raise a little wave to the world while in his mother’s arms 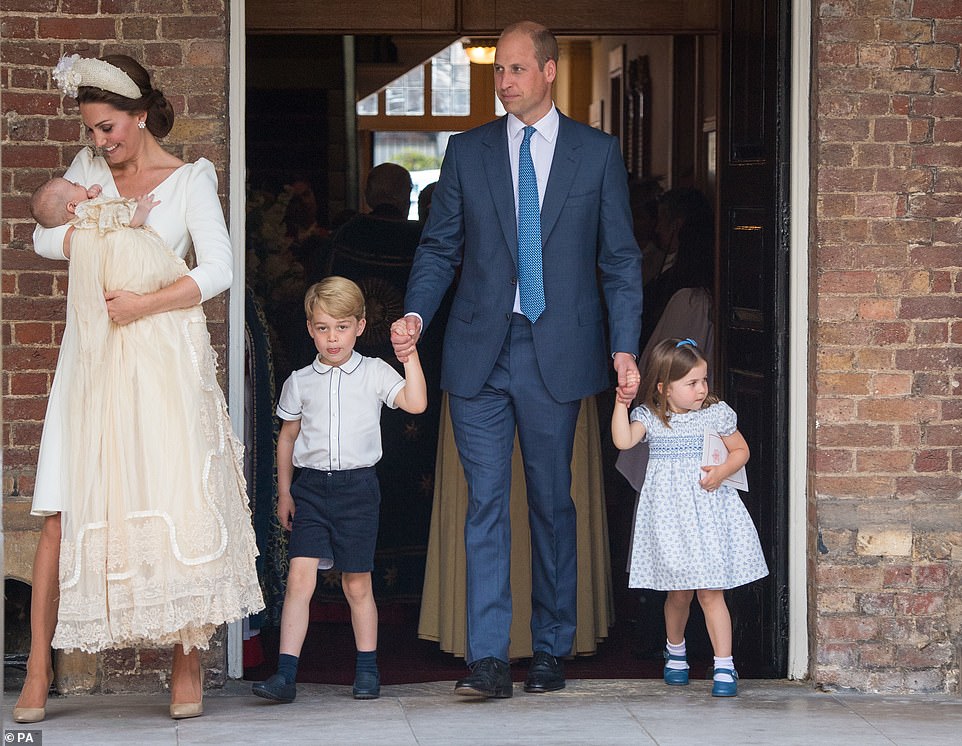 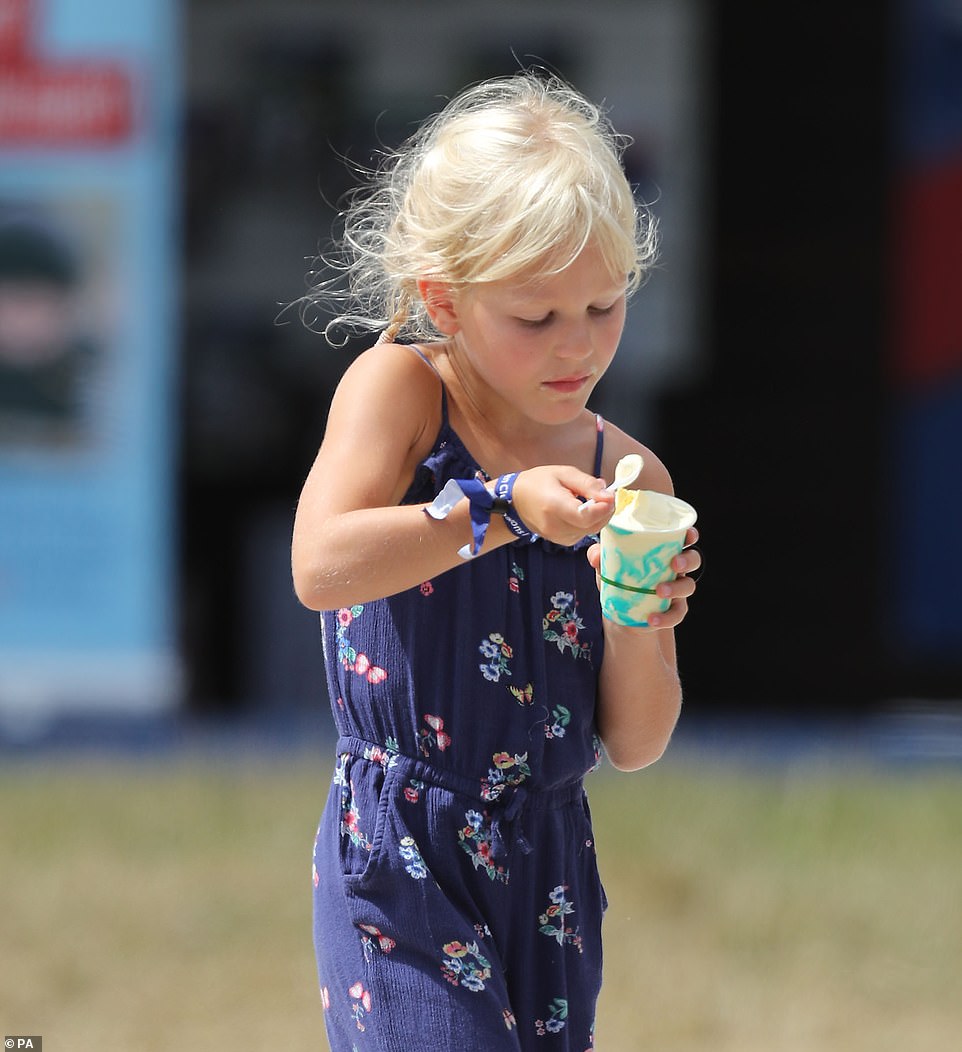 While Britain basked in the heat, Isla Phillips, like every other child in the land, enjoyed tucking into a cup of ice-cream. The six-year-old was pictured enjoying a family day out at Gatcombe Park in August 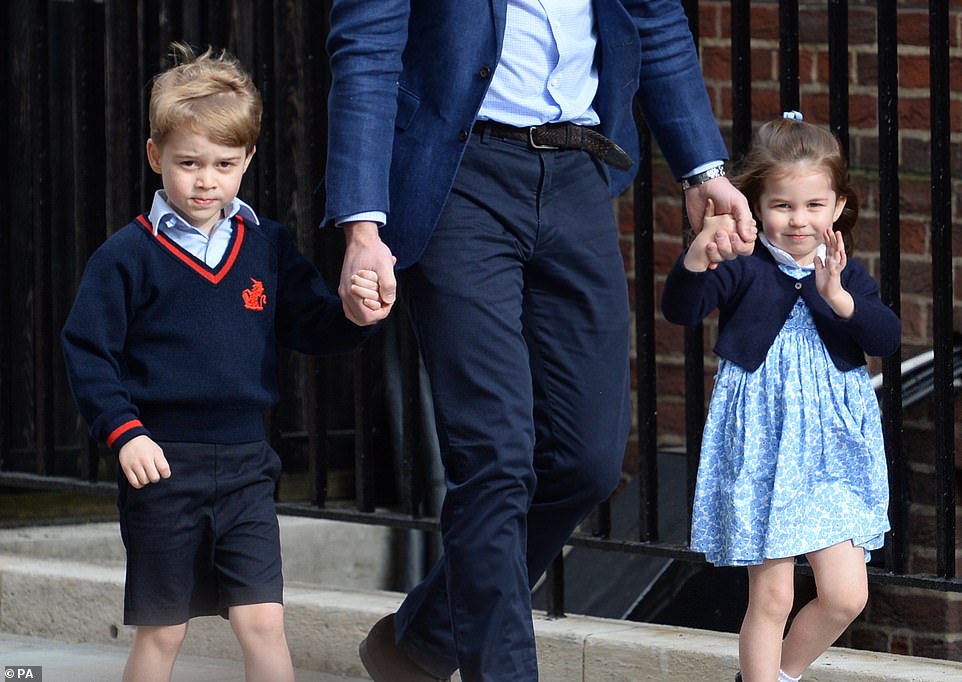 And then there were three! Prince George looked unsure as he approached the Lindo Wing to meet his younger brother Louis on April 23rd…meanwhile Princess Charlotte proved once again that she’s a natural in front of the camera, offering a wave to the nearby snappers 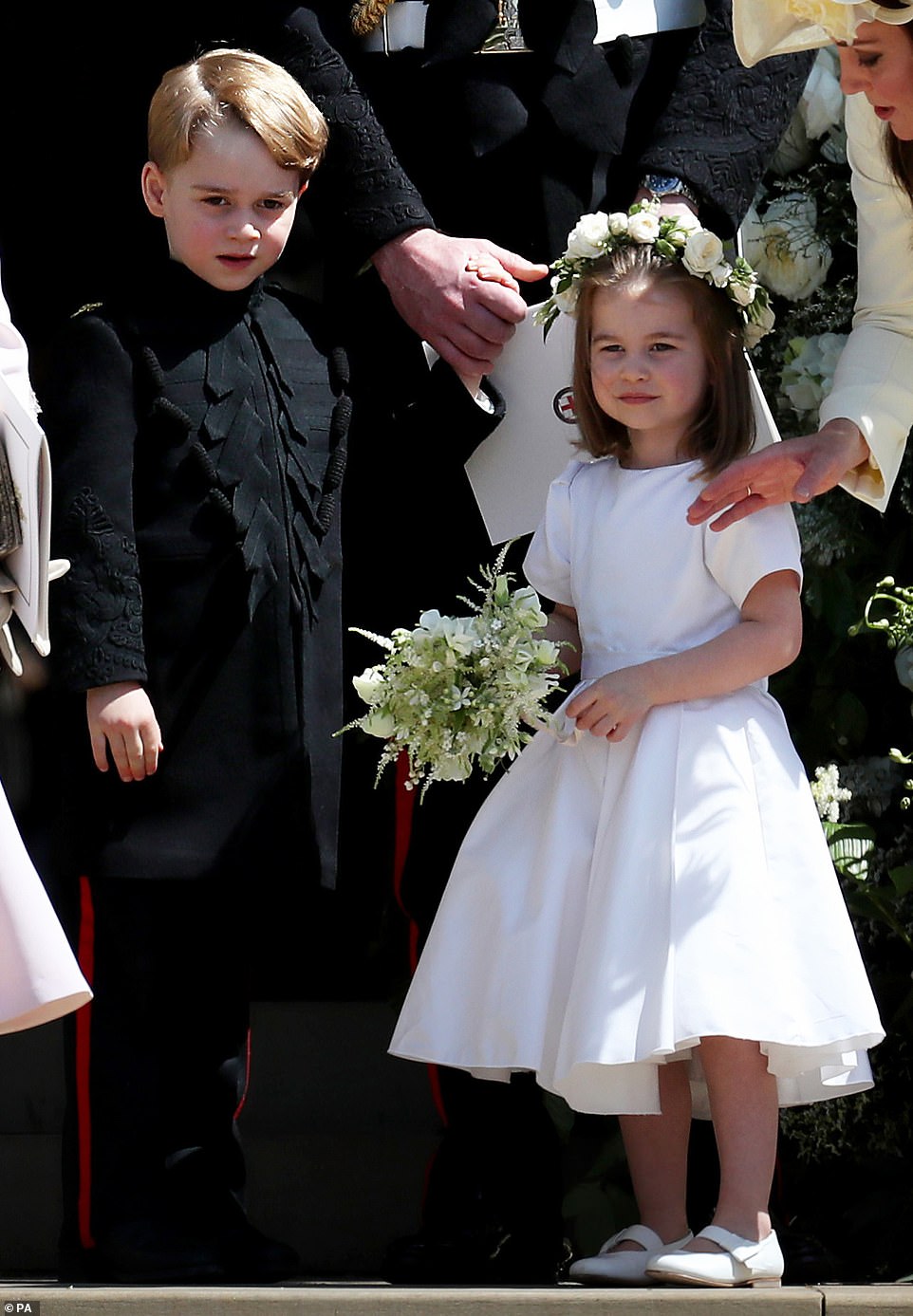 Hey, sister! Looking super smart in a black suit, with red piping on his trousers, Prince George posed with his sister, wearing a beautiful white dress and matching shoes, ahead of the wedding of Prince Harry and Meghan Markle in May 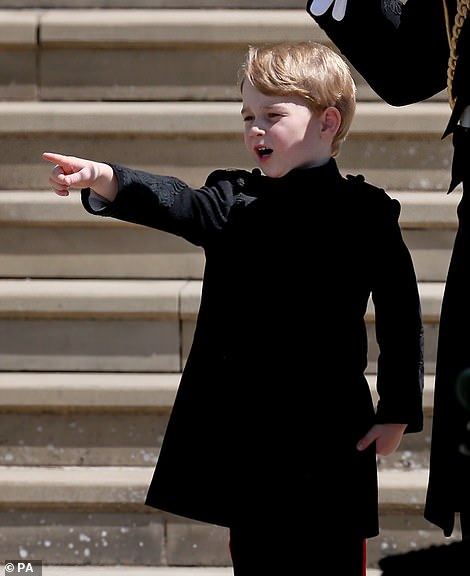 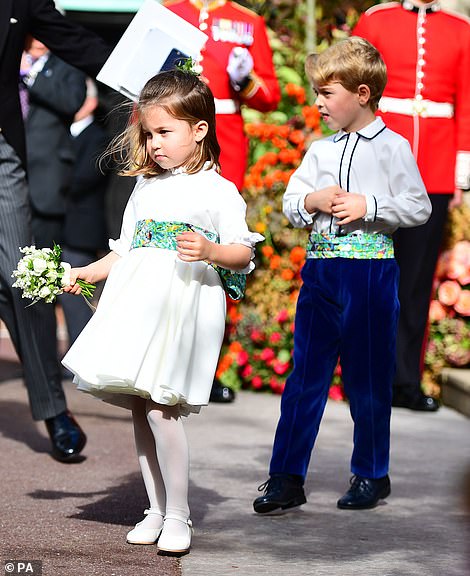 Quite a wardrobe: Prince George points a finger on the royal wedding day after spotting something in the crowd: Right: Princess Charlotte and Prince George leave the wedding of Princess Eugenie to Jack Brooksbank at St George’s Chapel in Windsor Castle in October

George, who turned five in July, and three-year-old Charlotte had already had important roles at the Duke and Duchess of Sussex’s wedding.

Bridesmaid Charlotte was seen sticking out her tongue as she arrived for the high-profile ceremony in May.

George and Charlotte had, less than a month earlier, welcomed their new baby brother Prince Louis.

The pair visited Louis in hospital, with Charlotte showing off her perfect royal wave, and the Cambridges’ third child made his debut on the steps of the Lindo Wing in Kate’s arms.

Later in the year, the two eldest Cambridge children spent a day playing in the sunshine at the polo with the duchess in Tetbury.

Meanwhile Mia, the daughter of Zara and Mike Tindall, also welcomed a new sibling – her baby sister Lena in June.

Four-year-old Mia was seen cuddling up to her ex-England rugby player father at the Celebrity Cup charity golf tournament in Newport just days after Lena was born.

The gaggle of royal youngsters will now be waiting to welcome a new addition to their gang – Harry and Meghan’s first child, who is due to be born in the spring.