Squiz Kids is hosted by Bryce Corbett, a seasoned journalist and father of two children. He says this latest show was based on audience feedback; many parents reported listening to The Squiz with their children, and wanted something specifically designed for younger listeners, that parents and children could listen to together.

“Parents were particularly keen if we would look at creating something specifically for school-aged children using the same basic precepts of The Squiz; that it’s just the news, there’s no agenda. It’s opinion free. So it was the delivery of the same sort of a package in a kid-friendly format,” says Corbett.

Corbett spent a month or so interviewing “child education, communication and broadcasting experts” as well as children’s television executives and teachers, to determine the best way to keep Squiz Kids entertaining and informative for the target audience of primary school children. 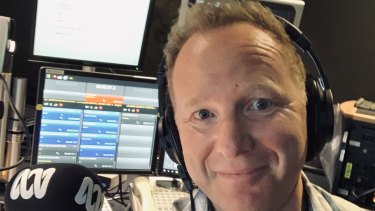 “I’m a parent myself, I have two kids and I see how they interact with news media now. And it’s completely different to how it was when I was young,” explains Corbett. He says when he was young he “would watch TV news every night, the radio would be on in the background in the mornings and in the car. And newspapers were a very strong feature in my household growing up.

“And that’s changed completely. A lot of parents are quite anxious about making sure their kids are media savvy. [They want their kids to] have a good sense of media literacy and understand how to be critical consumers of information that they’re being fed. So ideally Squiz Kids will help to hone their skills in understanding, that they need to be a critical consumer of media.”

Corbett has fond memories of his primary school teachers “wheeling in a TV on a trolley so we could all watch [the long running ABC News program for children] Behind the News” and hopes Squiz Kids might have that same impact for today’s young people, to get them involved in the world around them.

“Kids are curious by nature and they’re curious about the world around them as long as it’s delivered in a way that is palatable. The overriding principle of Squiz Kids is don’t talk down to them. I’m conscious that you don’t want to be spoon feeding your children doom and gloom every single day. But there is a way in which you can inform them about the world around them without terrifying them about it or without making them feel like they’re helpless to do anything about it.

“We’ll certainly cover the big issues. The bushfires at the moment are a really big story and we’re not going to pretend that they’re not happening. We’re not going to create some little information bubble for these children that doesn’t bear any relation to the real world. We’ll cover those stories.