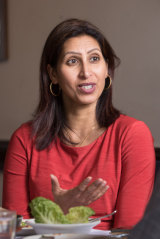 I have left myself too little time to get from town to the suburban Eastern Mediterranean diner chosen by oncologist and author Ranjana Srivastava for lunch, so I fire off an apologetic, slightly harried text. I am anxious not to put a crimp in the day of a woman who spends her working hours dealing with much larger problems than my five-minutes lateness.

On arrival at Samsara in Mount Waverley, it quickly transpires that a small delay is a speck of discomfort compared with the mountain of it Dr Srivastava has already climbed. The woman whose radio voice is the essence of soothing calm appears as composed as you'd expect, but she has a morning that would level most of us.

"I lost a patient this morning," she says, shortly after we sit down to chat about her latest book of medical and life perspectives A Better Death: Conversations about the art of living and dying well (her sixth). "He was 35 and had a particularly advanced cancer [of the brain]. His mother was sitting with him and I sat with her – he has a wife and he has two little children – and I said to his mum, 'I feel this every bit as a parent, I've got children'.

"And his mum said, 'He never drank, he never smoked, he was a good boy, why is this happening to him?' And I said, 'I have no answers and my heart is breaking'. Just standing there, everybody was so sad. She was at his bedside for days."

After leaving his hospital room, this imperturbable-seeming cancer doctor of more than 20 years went to the car park she had used "every single day for 10 to 15 years" and promptly smashed her car hard against a barrier while reversing. So if you ever wondered whether your inscrutable specialist is affected by the experiences they live through with patients, there's the hint of an answer. 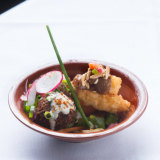 Australian-born (her Indian physicist academic father was doing his PhD in Canberra), Indian and American-raised Srivastava confesses it was tempting to get mad at herself, but she simply could not bring herself to. "[It was] stupid, massive damage, I'm fine but it was an expensive bingle – by myself! I was partly upset, partly distracted by thoughts about general life … I got out and looked at it and said, 'Yep, it needs repair. [But] someone died. And it's OK, and I'm OK.' I think [seeing people pass away] does, if you are willing to engage in with it, put things in perspective."

A mother of three, Fulbright scholar and medical media personality Srivastava says attempting to maintain a psychological barrier between yourself and the pain you witness is one way long-term medical professionals could choose to cope.

"One thing you could do is say, 'Someone died, I had a bad day, let's move on I'm not going to think about it', which is one way of moving forward and showing up to do your job every single day – to put up this distance. And we all need some, otherwise you would be a mess and a wreck and couldn't go back."

Instead, Srivastava chooses to show up. She makes sure she is fully present even at moments of extreme distress and advises younger professionals to do the same: "What I like to tell my residents – who were all there today, some of them as young as the patient who died or not much older or younger – is I think it's an opportunity to just look at your own lives and think, 'OK, what can I do better, what is going right, what can I learn from this?" 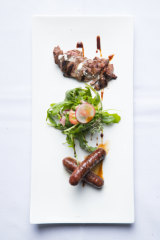 How we die and what we can learn about living better is a conversation that could, in less thoughtful hands, put you off eating at all – but Srivastava has come to understand enough through her work that traversing such existential territory is not uncomfortably confronting. We are wading in deep conversational waters even as the menu arrives (promptly), so we settle on the mezze-style menu for two so as not to be too distracted by choice.

Srivastava chose the restaurant because "I like it", and the gorgeous looking round of entrees bears out her experience here: delicious home-made hummus, smoked eggplant, yoghurt and cucumber dip, harissa, roast capsicum with walnuts, tabbouleh, home-cured olives and that cheery-smelling flat bread. She says "being present" also applies to an event such as our lunch, which she can actually enjoy despite the day's challenges.

She is a fan of the practice of mindfulness and is "constantly taking stock". "Being a doctor has made me very mindful of relationships: not so much of health but of time and how to make use of your time.

"So yes, I eat well and I go to the gym, but just enjoying what you have and enjoying relationships and fostering them and being mindful our time in this world is limited – so whatever it is, try to make the best of it."

She has seen first hand how "when people say they will do these things at some other time in life, that time never comes", and makes "active decisions" about how to spend her days. Good relationships are key, she says, and you don't need hundreds of them. "I have very few relationships, but I treasure them. I don't have 100 Facebook friends, I have a limited number of friends but I see them, I walk with them, I know them."

Also important in a good quality life is social interaction and engagement with the world, and a personal pursuit – hers being a passion for writing since she was 11.

She says the latest book is not one she could have written before completing the decades of bedside work that she has.

She includes references to Buddhist teaching in the book and emphasises that those who are able to "die well" tend to have lived by certain beliefs and values.

"'Even death is not to be feared by those who have lived wisely':I have found this to be true for some of my most memorable patients, who were leading ordinary lives until they had to contend with their mortality."

"People who die well tend to hold certain values and attributes that inform and enrich their whole lives. Compassion, empathy, forgiveness, self-worth, equanimity, acceptance and resilience are all important … we can strive to cultivate them and use them in our interactions." You kind of wish she had time to go on the speaking circuit in schools. 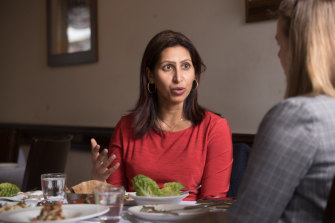 Srivastava's Hinduism is a presence in her life. "I am observant," she says of faith. "My family has always been very open minded – I think Hinduism is more a way of life, a way of thinking than necessarily rituals at places."

Despite years moving between countries following her father's work, Srivastava says she feels "very Indian at heart". Her parents were able to migrate to Australia and as a result she and her family enjoy a fairly traditional extended-family existence, in which the grandparents play a supportive role in children's lives.

More courses arrive, including perfectly-grilled Haloumi and falafels. Dr Srivastava quips that she doesn't usually eat like this for lunch, which is more often "a can of tuna"; she's as fitness conscious as it would be possible to be given her schedule (work, family, reading, writing) and forces herself out of bed every day to hit the gym at 6am "before I have time to think about it".

So what, in the end, does she hope readers will take away from her latest gentle reminder that we all have plenty of important choices about how to do life? "There's a quote in the book that I think formed the basis of my whole thinking about it …  'Every day, man sees countless people die yet he behaves and talks as if he will live forever'.

"We are all going to die but, in a mindful way, knowing that allows you to live by your values: live well, to do good by others and then to die well. 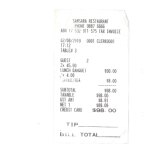 Receipt for lunch at Samsara

"In the first part of the book I look at what kind of values keep coming up among people who live well, and there are simple things we all know about: kindness, generosity, gratitude, equanimity – just keeping calm – that I have repeatedly seen among people who lived well. What does it mean [to live well]? Who comes to their bedside? And how do they die peacefully?"

You could possibly even boil the message of this comforting work down to a single line: "To learn from each other may be the wisest thing we can do with our lives." Srivastava's writing, like her presence at lunch, offers plenty to go away and ponder. The conversation has been so fulfilling, there is no room for dessert.

A Better Death: Conversations About The Art Of Living And Dying Well by Dr Ranjana Srivastava (Simon and Schuster Australia) is out now.

Married at First Sight Nine, 7.30pm In the 1998 poker film Rounders, Matt Damon's card player observes that, "If you can't spot the sucker in…