Speaking on Tuesday to a webinar of the Conservatives for Conservation group, which bills itself as a centre-right political group for climate action, Robert Hill said Australia "can afford to be a leader" on the urgent changes needed to limit the impact from natural disasters like the Black Summer bushfires. 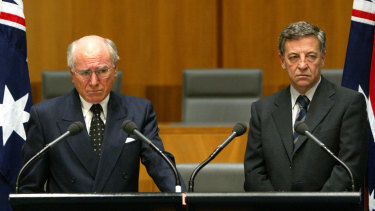 "If we don't take the lead, how can we we expect anyone else to? There hasn't been a sense of urgency in Australia. It's been, rather, what is the global budget to achieve a certain outcome … and what's our fair share?" Mr Hill said.

"What burden can we fairly take to contribute to achieving that outcome rather than a sense that maybe Australia should be the initiator, be out there creating a sense of leadership."

Climate policy was not becoming more ambitious, Mr Hill said, "even though we've been through terrible bushfires of recent times and manifestations of a warming climate".

Under Australia's 2015 commitment to the Paris Agreement, it is required to reduce its emissions by at least 26 per cent by 2030, based on 2005 levels. The agreement also requires countries to reach net zero emissions by the end of this century.

However, the agreement also locks signatories into following the "best available science" to make the emissions reduction required to limit global warming to under 2 degrees and as close as possible to 1.5 degrees.

Climate experts say that under the current trajectory of warming, net zero global emissions before 2050 is required to limit the temperature rise to below 2 degrees.

Energy and Emissions Reduction Minister Angus Taylor has committed to meet the 2030 target and has released a discussion paper on a technology roadmap which he said would be a "cornerstone" of that effort.

Mr Taylor has said, regarding the longer term goal under the Paris Agreement, Australia is required to achieve net zero only in the second half of the century.

To reach the 2030 target under the current emissions reduction trajectory Australia is expected to use "carryover credits" to achieve about half the reductions which were earned by exceeding the target set in 1998 in the Kyoto international climate treaty.

"Taylor says that he is working seriously towards a long term plan in terms of his technology roadmap," Mr Hill said.

"But whether they intend that to lead to a long term commitment is still unclear."

Mr Hill said when he worked on climate policy, he emphasised the importance of "having hard short term targets and longer term aspirational goals". "What's happened in intervening years is that aspirational goals are no longer sufficient, that we realise we don't have the time that perhaps we then thought we had," he said.

"So the longer term goal has to become a target. It has to be based by solid policy otherwise it won't work."

Mr Hill said the public debate over climate policy had focused on relative comparisons of Australia's total emissions only making up 1.3 per cent of global output and the hurdles to emissions reduction, including a growing population and an emissions intensive resources-based economy.