A coronavirus outbreak has ripped through an upstate New York prison where access to medical services and sanitation have long been criticized by advocates and many inmates housed in the facility.

Nearly 40% of inmates housed at the Elmira Correctional Facility, a state prison in Elmira, New York, were COVID-19 positive as of Tuesday — 588 out of a population of 1,515, according to data released by the state’s Department of Corrections and Community Supervision.

The facility went into lockdown on October 21. Inmates are largely confined to their cells and visitors are barred. Emily Singletary said contact with her husband Derek, who is incarcerated in Elmira, has dropped from daily half-hour phone calls and two visits a week, to brief, intermittent calls of a few minutes, sometimes days apart.

She said that while the prison appears to have tested much of its population at least once, there’s been no indication of how frequently it will conduct tests for the rapidly spreading virus.

“It’s scary. He was tested last week on Monday, but we have no idea. We’ve heard nothing about a plan to retest people. It’s still rampant in there, and for all we know he could have been exposed sometime between when he was tested and now,” Singletary said.

Singletary, whose husband was incarcerated following a 2011 manslaughter conviction, was among a group of advocates and family members who held a rally outside the prison Tuesday demanding the release of vulnerable inmates and an end to solitary confinement.

Both families and the incarcerated said there’s been a frustrating lack of communication from prison officials. At the rally, Jerome Wright, an organizer for a campaign called #HALTsolitary, read a letter he said was written by Elmira inmate Jacob Rouse.

“Everyone I have spoken to about it seems to have no answers for me, or don’t want to discuss anything. It is extremely frustrating. No health care professional has even asked if I was OK, had symptoms, or needed anything. This whole situation is so frustrating. I have broken down several times. I don’t know how much longer I can hold on,” wrote Rouse, who was incarcerated following a 2006 murder conviction.

Thomas Mailey, a corrections department spokesperson, said in a statement that the state’s response has been “guided by facts, scientific data, and the guidance of public health experts” to protect inmates and staffers. “The first steps are the same whether the individual is in prison or not — isolate those who are COVID-positive, trace their contacts, and quarantine anyone who was exposed.”

The department’s efforts to prevent the spread of COVID have included testing nearly 26,000 of the state’s 36,000 incarcerated people and releasing about 3,000 who were imprisoned for low-level parole violations and non-violent crimes.

Rouse and others have complained that corrections officers in the facility often fail to wear masks while working. Singletary said she observed it firsthand while visiting her husband in early October, and that he gave her permission to voice his concerns as well.
It is currently mandatory for corrections officers to wear masks while on-duty, according to the department’s COVID regulations.

“I was very concerned about the risk of retaliation … because he’s the one who’s going to bear the brunt of that risk. But he encouraged me to do it. He thought that in this case that the risk was worth it because it is such a serious situation,” Singletary said. 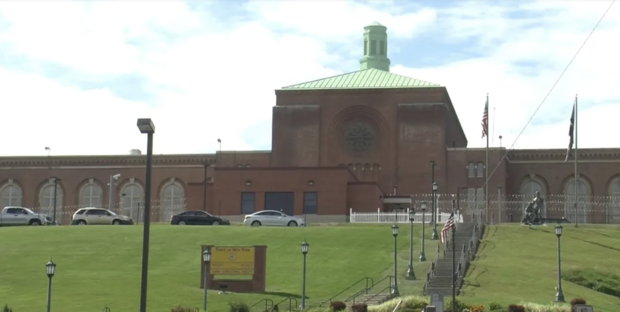 The Correctional Association of New York is an independent organization authorized under state law to conduct regular onsite prison monitoring visits throughout the state. The non-profit collects data from government sources, as well as through surveys and interviews of inmates. In a 2019 survey, long before coronavirus reached New York, more than 100 Elmira inmates revealed widespread concern for health and sanitation conditions in the facility.

Governor Andrew Cuomo defended the state’s handling of COVID in the prison system during a briefing on Monday. “DOCCS has done a fantastic job with COVID overall. We have had a lower transmission rate in the prisons than in the general population, believe it or not,” Cuomo said.

Evan Misshula, a data scientist with the Correctional Association, said the situation in the Elmira facility should raise concerns throughout the New York State prison system.

He said Elmira acts as the main reception facility for new inmates coming into western New York’s prisons, meaning many inmates are temporarily housed in Elmira before being sent to other facilities. He said the reception area, where the temporary inmates are housed, was a focal point for hygiene complaints at the facility.

Data shows other prisons are also struggling with COVID spikes. About 215 miles east of Elmira, the Greene Correctional Facility in Coxsackie, New York, is also struggling to contain an outbreak that has infected about 13% of the facility’s roughly 1,000 inmates, and nearly half of all prisoners in South Dakota have tested positive.

New York State refers to the communities with the most concerning spread of COVID as areas where the seven-day average of positive tests is higher than 4%. On October 23, according to Misshula, the rate at the Elmira facility was above 15%.

“I think that it’s, it’s a matter of time before it, it spreads to other prisons, but I’m sort of walking off the ledge of my data here. You could make an argument that Elmira is special and, and it won’t happen in other places, but I think it will,” Misshula said.

Meanwhile, advocates and family members are watching the crisis unfold from the outside, said Katie Schaffer, the director of organizing and advocacy at Center for Community Alternatives.

“One of the things that we’ve heard from incarcerated people and families is that (state officials) need to guarantee daily communication with families,” Schaffer said. “This lockdown cannot be used to isolate people (from) all human contact, for their own psychological and emotional needs, and for their families who are desperately worried about them.”