Em Rusciano has opened up about the "really awful, hard time" that provoked her sudden exit from breakfast radio last year, saying she "questioned a lot about myself" following the turbulent period.

"What am I good at? Was any of it true? Were there things I needed to work on in myself?" Rusciano, 40, recalls. "In the end, I got some perspective. I said, 'OK, pull your head out of your anus'. 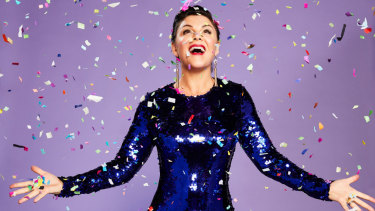 About this time last year, the media personality was neck-deep in self-sabotage mode. Rattled by dismal ratings in her 2DayFM hosting gig and news reports decrying her "diva" workplace antics, she aired her grievances in that most modern medium: comedian Wil Anderson's podcast.

On air, she lamented the "frivolous" churn her daily gig had become. She criticised her station bosses for wedging personalities Ed Kavalee and Grant Denyer into what had once been her very own breakfast program. She also predicted her exit from the show, telling Anderson she was "hurtling towards some implosion in the next six months", a deadline she overshot by about half.

Ten months since she bid farewell to the radio gig, she reflects on the situation as "a lot of people and stuff that went on". 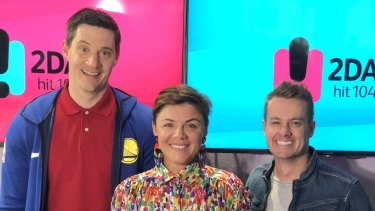 Rusciano with Ed Kavalee and Grant Denyer before she left the 2DayFM Breakfast Show.

"When there's a big shift in your life, you can either learn from it or let it bury you, and I chose to pivot off it," says Rusciano, admitting she's "tired of talking about it".

"Look, it all gets blown out of proportion … It was a really tough job, it's just a chapter of my life where I gave it my best and it gave me a lot of great opportunities … Now, I'm good. I'm in my happiest place. I feel like I'm in control of my career again."

Rusciano's hustler's streak – those tireless instincts that shot her from a minor spot on season two of Australian Idol to a full-blown broadcasting career in the industry – has since copped a renewed workout.

She's currently working on a "comedy-erotica" novel to be published by HarperCollins and has plans to produce a new podcast. But first she's back with a headline comedy show, her Rage + Rainbows tour, which launches at Melbourne's Hamer Hall on Friday and includes a sold-out gig at Sydney's Enmore Theatre next month.

The show suggests a variety extravaganza ("eight-piece band and costume changes!" screams the promotional material) and includes original songs – titles such as Geriatric Pregnancy, a November Rain-style torch-burner about birthing her third child, Elio, in January at age 39; and The Kind of Man I'd Like You To Be, a message of sensitivity to her boy, but also men in general – that Rusciano penned with Kate Miller-Heidke.

"I loved [Miller-Heidke's] songs for Muriel's Wedding: The Musical, I think it's one of the greatest musicals ever written … I just said, 'I need her'," Rusciano says about cold-calling the receptive musician. "She thought Eurovision was going to be the campest thing she ever worked on, then she joined my show."

The tour's evocative title – a multi-layered nod to righteous feminine anger; the feelgood release of an unbridled night out (as in "rager"); the hope that forms after personal turmoil; and also her supportive LGBTI following – encompasses much of her recent context, says Rusciano.

"I've swung quite violently between the two extremes throughout the past year and I've noticed an energy among women in general in that we're just fed up," she says, citing the country's domestic violence levels, domestic labour gap and "how my daughters can't walk to their cars unless they've armed themselves".

"This show is about reframing the way we view women expressing their anger or their displeasure …" she says. "And yet every day we still get up and dress brightly and exude joy and colour and life. It's about discussing the two extremes together because they do exist side by side, and it's OK."

Em Rusciano's Rage + Rainbows Tour begins in Melbourne on Friday and Saturday, and continues in Sydney on August 9 and 10.