Fashion giant I Saw It First is slammed for using coronavirus pandemic to sell clothes after offering free hand sanitisier to 1,000 customers

Fast fashion retailer I Saw It First hasbeen slammed online for using the coronavirus pandemic to sell clothes, after it launched a campaign to give away free hand sanitiser with purchases.

The UK-based clothing giant, who famously sponsor Love Island, was slated as ‘abhorrent’ for the marketing ploy, which promised free hand sanitiser to the next 1,000 customers who place an order.

Shoppers received the ‘disgraceful’ email about the promotion last Wednesday and were quick to voice their disapproval. 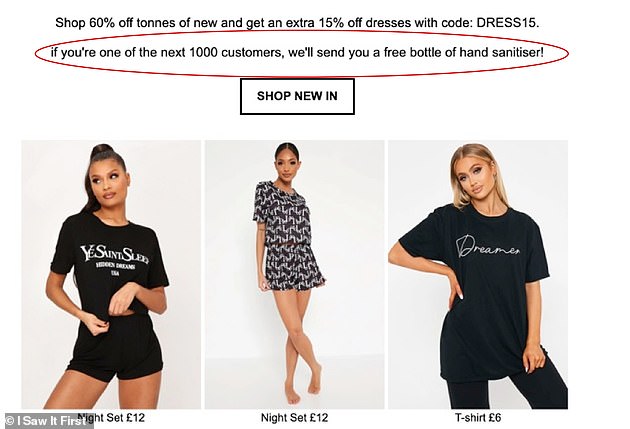 Fast fashion retailer I Saw It First have been slammed online for using the coronavirus pandemic to sell clothes after they launched a campaign to give away free hand sanitiser with purchases. 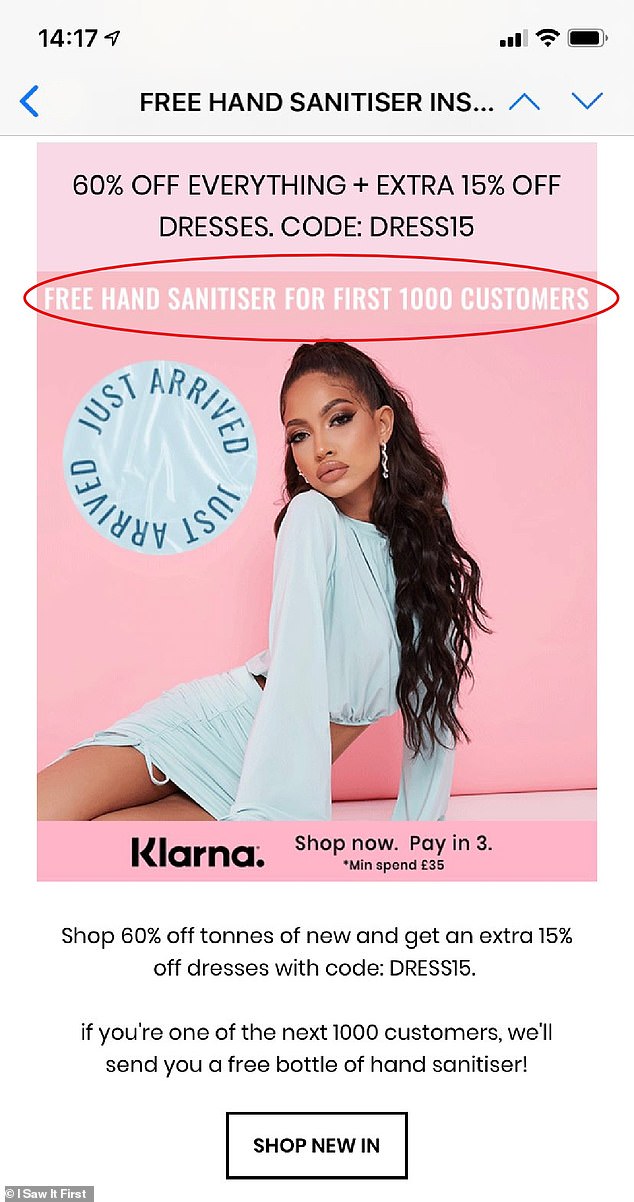 The online clothing giant, who famously sponsor Love Island was slated as ‘abhorrent’ for the marketing ploy, which promised free hand sanitiser to the first 1000 customers.

The campaign follows widespread reports about shortages and price inflation of hand sanitiser, as suppliers struggle to keep up with demand amid the ongoing coronavirus pandemic, which has killed 1,231 and infected 19,788 in the UK.

Taking to social media, fans slammed the brand for being insensitive.

‘Could @isawitfirst be anymore insensitive during this crisis? Using a pandemic to try and sell clothes? There are people desperate to get hand sanitiser because they are vulnerable but these guys are hoarding it all so they can sell more clothes. Honestly disgusting’ one person wrote.

Another added: ‘I Saw It First is trying to get people to buy clothes during a pandemic? By saying they’ll send a free bottle of hand sanitiser? I’m actually disgraced.’

A third said: ‘F****** abhorrent, you should be ashamed. Also, you should donate all the hand sanitiser you have to the NHS.’

‘In case you’re wondering why you can’t buy any hand sanitiser, @isawitfirst has bought it all to use as a marketing ploy to sell £3 dresses’ added a fourth.

Taking to social media, fans slammed the brand for being insensitive, branding them ‘abhorrent’ and ‘disgraceful’

Responding to several of the complaints, I Saw It First then stated that as well as the 1,000 bottle giveaway to customers, it would also be donating 5,000 hand gels to the NHS.

The brand wrote on Twitter: ‘As well as gifting hand sanitiser to our customers, we are also donating 5000 hand sanitisers to the NHS, who continue to work tirelessly during this extremely difficult period and looking into ways we can source more to help.’

However, social media users remained unconvinced, as one fumed: ‘Why don’t you donate the 1,000 bottles of hand sanitiser you have to the NHS staff risking their lives to save ours, rather than giving them away for free to your customers?

‘Also where on earth have you sourced 6,000 bottles of hand sanitiser when there is a worldwide shortage and people are stealing it from NHS hospitals?’

Responding to several of the complaints, I Saw It First then stated that as well as the 1000 bottle give away to customers, they would also be donating 5000 hand gels to the NHS.

The UK’s coronavirus outbreak looks to be slowing down because of the Government’s unprecedented decision to put Britain in lockdown, one of Number 10’s leading experts said today.

Professor Neil Ferguson claims to have detected ‘early signs’ that the spread of the life-threatening infection was being curbed by the draconian measure, with the rate of increase in hospital admissions easing.

But Professor Ferguson – one of the authors of a bleak Imperial College London report that convinced Downing Street to ramp up its efforts to stop the crisis after warning that 250,000 Brits could die under a controversial plan to build-up ‘herd immunity’ – warned deaths are still likely to rise sharply as they lag two or three weeks behind the new infections.

He also suggested that up to three per cent of the UK – around two million people – might already have been infected, and said the figure could be as high as five per cent in London.