Gender-neutral pronouns might seem like a new invention that are difficult to use at first. But whether you know it or not, you already use them every day, to talk about someone whose gender you don’t know. (Me: "Do you mind if my friend joins us for dinner tonight?" You: "Sure! What’s their name? What do they like to eat?") For years, my non-binary friends asked to be called “they” instead of “he” or “she,” but to me, it just felt too awkward to say consistently. But these days, I use gender-neutral pronouns myself, so I understand why it’s important to get it right.

Unlike the sharp razor of “he,” or the icy slurry of “she,” "they"/"them" pronouns never cause me to feel the pang of despair I’ve learned to call gender dysphoria. According to the American Psychiatric Association, this is “a conflict between a person’s physical or assigned gender and the gender with which he/she/they identify.” For me, it feels like a painful sense of chafing against the gender people think I am. Many describe it as a sense of unreality, or the desire to crawl out of their own skin. For many, this sensation is lethal. A 2018 survey by the American Academy of Pediatrics showed that more than a third of trans teens have attempted suicide — and the rate is even higher for those who are non-binary.

Dysphoria often diminishes when a person transitions, moving toward their preferred form. But how does one treat their dysphoria if neither “male” or “female” feels right?

It was just two years ago, on an early Easter morning when I was 23, that I realized I wasn’t a boy. The sun was cresting the Mississippi River, and a chorus of people dressed as birds were singing. I looked at my dress and lavender nails and saw, for the first time, a girl. Soon after, I had to use the restroom. Frat-boy voices echoed from behind the door marked “Men.” The other door had no sign; I took refuge behind it. 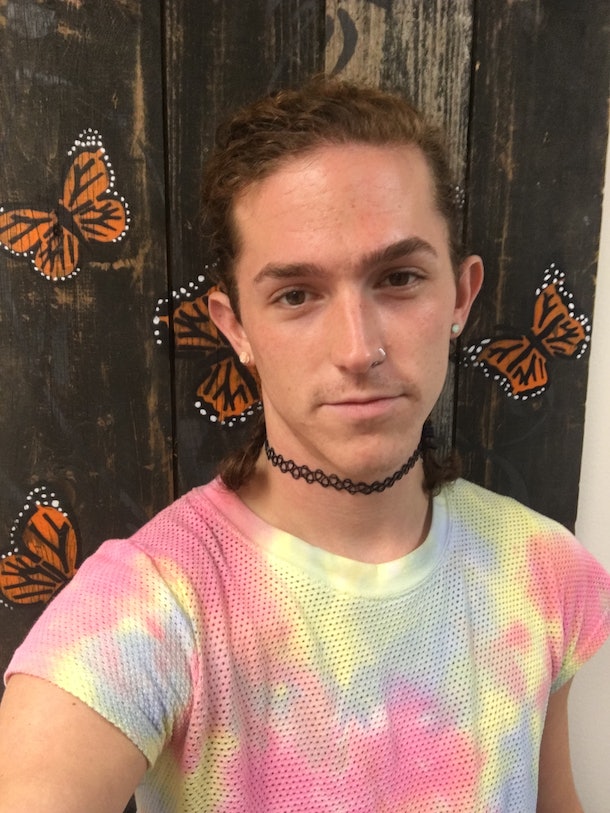 I didn’t grow up thinking I was a girl, but I didn’t always feel like a boy. When I was four, on a family trip to Disney World, my brothers dressed up as Woody and Buzz Lightyear. I spent the week flouncing through the park in a billowy Cinderella gown. (Yes, my parents are awesome.)

When I was in elementary school, the other boys mistrusted me. I hung out with girls and did “girly things” like braiding hair and talking about our crushes. I got teased, so I started playing football at recess. I didn’t like it, but I did enjoy the benefits of being accepted by the boys. I deepened my voice until I forgot its natural octave. By high school, I considered myself a “bro.”

In college, I joined a frat. I later came out as bi. Becoming more comfortable, I played with drag, and began to see myself as genderqueer. Though I considered that I might be trans, I wasn’t having an obvious or painful experience of dysphoria, which has historically defined trans people, perhaps in a limiting way.

Unlike many people with dysphoria, I had a happy relationship with my body and didn’t (often) fantasize about being a girl. Regardless, I was beginning to suspect that I was not a “man” — and that I identified with this word only for comfort.

After college, I traded my frat digs for the quirky milieu of New Orleans, and began to meet folks who defied the norms of how trans people are widely imagined. Refusing to settle on either side of the binary, they artfully mixed and matched. 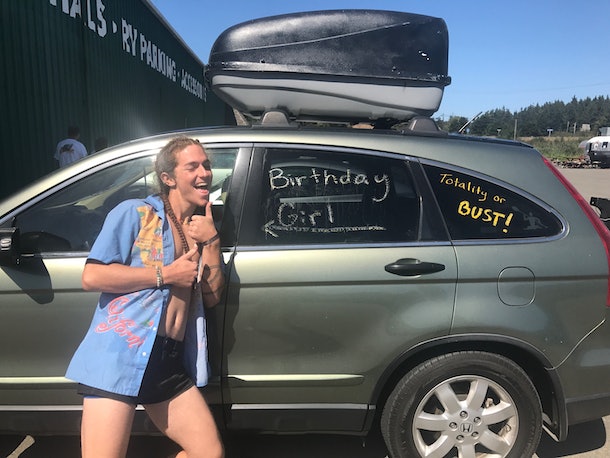 I met someone who uses “rolling pronouns” (he, she, or they, depending on the day) and folks who laughed at labels. I met people who wore dangly earrings, braided beards, breasts spangled with hair and glitter. I saw all the playful possibilities gender had to offer.

After my Easter epiphany, I started asking people to call me “she” and experimented with the name “Delilah.” This was extremely challenging. My days were punctuated by endless bouts of tears. To make things worse, I couldn’t decide whether I was actually trans or not.

Sometimes I went out dressed en femme and it made my heart sing like a chorus of birds. Other times, when I put on makeup, I watched myself disappear. Sometimes I liked being called “she.” Often, it just felt wrong. Yet “he” never felt right, either. If I didn’t have dysphoria before, I certainly did now. But neither masculinity nor femininity offered safe harbor for me.

One of my trans sisters suggested that I might be non-binary. I hadn’t thought of non-binary folks as trans, but now it made sense: like all trans people, we don’t identify with our gender assigned at birth. Rather than transitioning from one to the other, we find relief in transcending gender altogether.

The word that best describes me is “genderfluid.” My gender (by which I mean a crystallization of my appearance, mannerisms, social role, feelings, and more) changes day to day. I fluctuate between “boy” and “girl,” but when I look in the mirror, I generally see neither. I’ve lost interest in “passing” as anything other than myself.

Some genderfluid folks and drag artists use rolling pronouns: “he,”“she,” or “they” based on how they’re presenting. This doesn’t feel right for me. My appearance doesn’t always match how I feel. I may go out in basketball shorts and no makeup simply because I didn’t have the time or energy it takes to look like a “girl.”

I sense people’s hesitation when they’re not sure whether to call me “he” or “she.” Luckily, neutral pronouns never make me feel misgendered. I prefer them regardless of how I’m presenting. 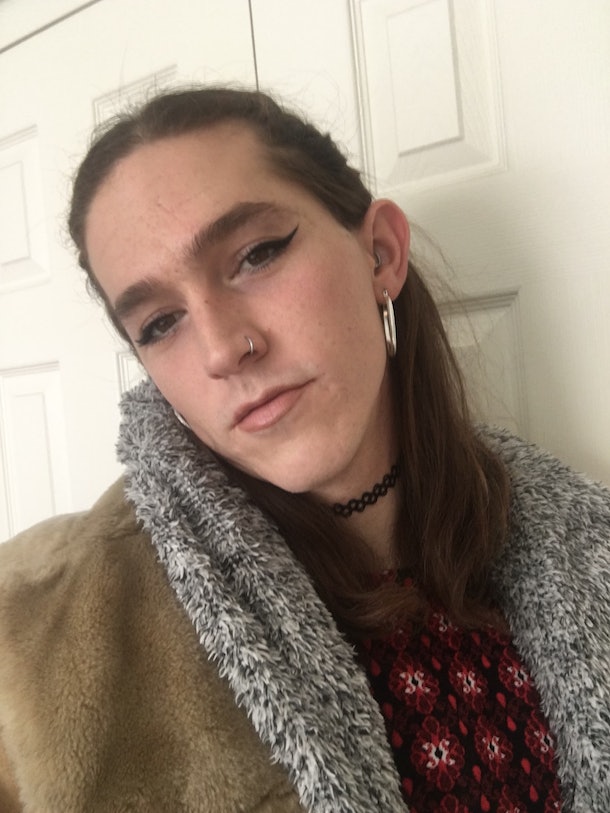 Some folks have told me that they’re reluctant to use “they” because it feels impersonal or disrespectful, akin to calling me “it.” On the contrary, hearing someone use my proper pronoun makes me feel seen and cherished. Hearing myself called “he” or “she” challenges my hard-won sense of self, as if breaking a spell I used my own blood to cast.

If you mess up, just correct yourself and move on. Demanding my forgiveness makes it about you. I don’t want to have to assuage your guilt or embarrassment. Using neutral pronouns gets easier with practice. Until you get there, when you make a mistake, don’t also make a scene.

Neutral words like “sibling” may not yet have the warm familiarity of “brother” or “sister” to you, but for non-binary folks, they’re music to our ears. It may feel awkward to be the only person in a room of cis folks referring to their “child” instead of "son" or “sibling" instead of "sister." But for the small price of that awkwardness, you’re helping us work magic.

You’re exploding the idea that we all fit neatly into “M” or “F.” You’re fostering space for non-binary people to be seen by others as we see ourselves. You’re committing an act of revolution, just with one syllable. How often can you say that?

While the language we’re using might be new, non-binary people are not. We’ve existed in all times and places. While we may have been misunderstood in the past, we’re here to share our iridescence with the world. All we ask is that you agree we are real — that neither “he” nor “she” describes us.

As you read this, there are non-binary people in your workplace, fraternity, sports team, and family who languish in pain because they don’t know if they’re real; if being non-binary is “a thing.” Every time they hear someone use gender-neutral pronouns, they take another step toward believing in themselves. Please join me in this magic.