‘I’m hired because of my age – not in spite of it’: She came out of retirement in her 60s. Now she’s one of Britain’s most in-demand models. SARAH RAINEY meets a trailblazer changing the face of fashion

But Stephanie stands out in more ways than one.

For a start, she is approaching her 69th birthday. She has recovered from breast cancer and a mastectomy which led to an 11-year hiatus from modelling.

And in recent months she has shot campaigns for Whistles, Space NK and MAC Cosmetics — at the same time as becoming a grandmother.

‘I pinch myself every day,’ she says. ‘I thought my career was over in my 50s but now I’m working more than ever. I get excited every time I get a job. I’ve always loved fashion. It’s like dressing up and getting to be a different person over and over again.’ 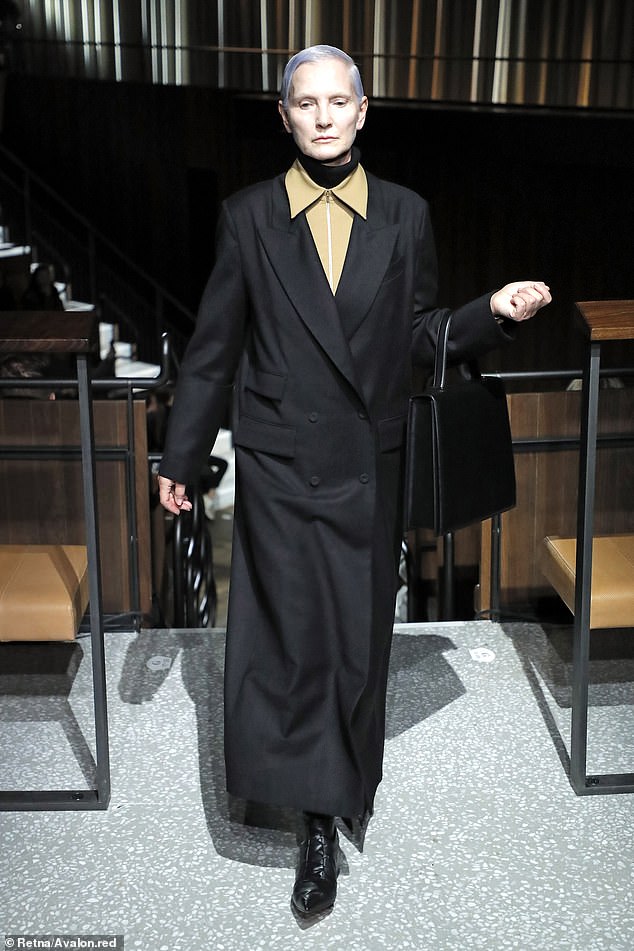 Stephanie Grainger who has starred in campaigns for Whistles, Space NK and MAC Cosmetics, began modelling as a teenager after moving to London from Yorkshire. Pictured: On the catwalk for Emilia Wickstead earlier this year

Last year she made headlines sporting a blue rinse on the catwalk for royal favourite Emilia Wickstead, alongside other silver-haired sexagenarians Mouchette Bell and Stefanie Lange. All belong to a new breed of women (none trading on their fame) who are being hired as working models — a sign that, at long last, ageist stereotypes about beauty are beginning to fall away.

Despite her age, or indeed because of it, Stephanie — who has also posed for Vogue Italia and Vivienne Westwood — is fast becoming one of the most in-demand models of the moment.

And about time, too: 50 years have passed since her career began.

Then a naive teenager newly arrived in London from Yorkshire, she was working in a dull job at the Ministry of Agriculture when a friend brought her into the prestigious Askew Model Agency in Berkeley Square for a casting — and they signed her up on the spot.

In the beginning, she says, it felt awful. ‘I couldn’t bear people looking at me. I remember flicking through my grandmother’s copies of Woman’s Own as a child and dreaming of becoming a model one day, but the reality was much more frightening.

‘My first show was Schiaparelli, where I wore a million-pound wedding dress covered in diamonds. There were bodyguards everywhere. I was so nervous; it was a lot to take in.’

Her initial nerves gave way to a sense of adventure and she disappeared to Amsterdam for six years with a boyfriend before returning to London to take modelling seriously. She did shoots for Dior, Yves Saint Laurent and Chanel, working frequently with the renowned photographer Patrick Lichfield.

Things were very different then, Stephanie explains. ‘I used to drag a big toolbox full of make-up, curlers and wigs everywhere I went, as you had to do everything yourself. Sometimes they would ask if you could bring a few outfits with you, too.’ 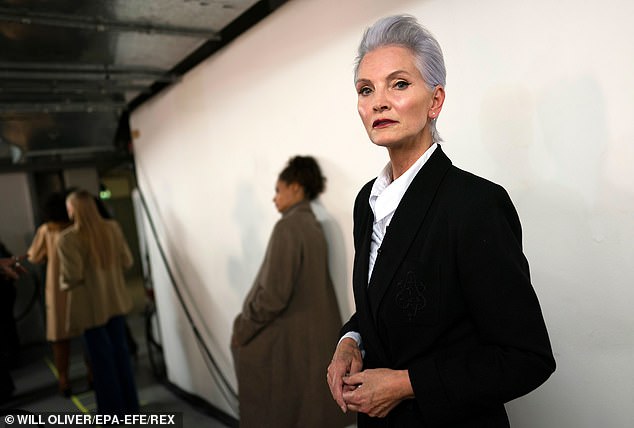 Nor were there any older models around. ‘Even when I was in my 30s, I felt old. I’d work with some young girls who’d get a bit lippy and call me a “silly old so-and-so” and I’d tell them: “You’ll be my age one day, darling, and if you look as good as me I’ll be surprised.”

‘I did struggle to get my head around it, especially with the expensive designer labels. The older women are the ones with the money, so why didn’t brands cater for them?

‘It’s insulting to have all these wonderful creams for ageing skin modelled on 21-year-olds. That’s just not realistic.’

Unusually, Stephanie stayed in the business for three decades, doing regular shoots and campaigns and taking just six months off when she had her daughter Annabel, now 33.

‘When I reached my 50s, I’d come to that point where I wasn’t interested in modelling any more so I started doing less and phasing it out.’

Around the same time, she got divorced, which meant she found herself in need of more reliable, steady work to pay the bills. She took a job in a bank, working in the City, where she stayed for 11 years. She thought she’d left modelling behind for good.

Aged 52, however, she had been diagnosed with breast cancer, which led not only to a mastectomy and surgical reconstruction of her right breast, but to a major rethink of life in general.

Going through such a traumatic experience, she says, ‘taught me to embrace everything; I haven’t looked back’. In 2016, at 63, she retired from her bank job and the following year was encouraged by her daughter to meet make-up guru Charlotte Tilbury, whose sister was one of her neighbours.

‘I was so far out of the business that I’d never even heard of her,’ Stephanie says with a laugh. ‘We met and she gave me a job modelling a lipstick she’d designed for the Queen. It gave me a little taste of what I’d been missing.’ 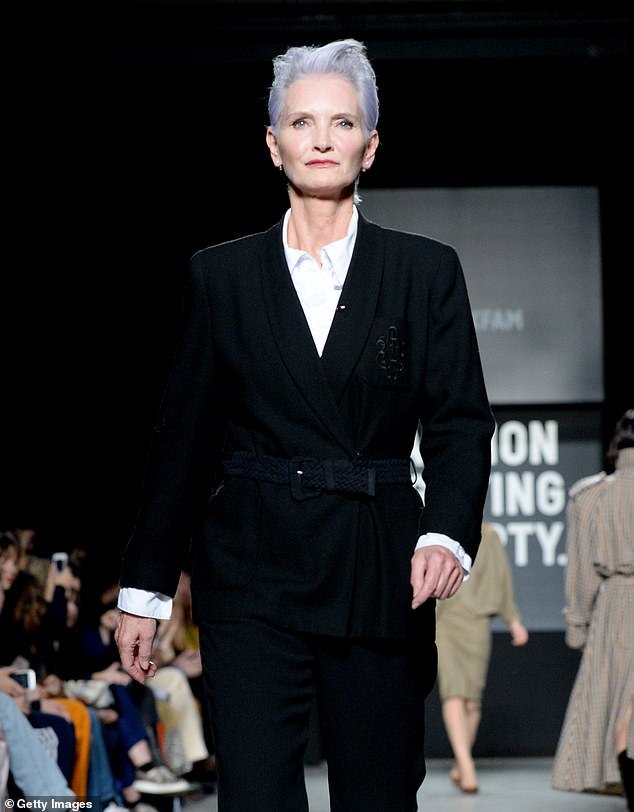 Stephanie (pictured) admits she was worried that she wouldn’t remember how to act in front of a camera, when she found herself working as a model again aged 65

Her next job was also for Charlotte Tilbury; a perfume shoot with Kate Moss (‘gorgeous but she didn’t really say anything’). This led to some portfolio shots, which her daughter sent in to the agency Models 1. They invited Stephanie in for a meeting and, just like the first time around, signed her up immediately.

Aged 65, she found herself once again working as a model. ‘I had so many doubts,’ she says. ‘I was worried I wouldn’t remember how to act in front of a camera and feared things would have changed so much I wouldn’t fit in.’

Yet she found an industry far more diverse and far less cliquey than the one she’d started out in.

Age, she says, isn’t nearly as much an issue as it was in the Seventies.

‘When I’d get booked for jobs, at first I thought, “I hope they know how old I am,” ’ she says. ‘But I’ve got over that. I’ve learnt to deal with working with much younger women, and to accept that I get work because of my age, not in spite of it.

‘During lockdown, I did have a bit too much time on my hands to think about ageing and whether I’d ever work again after the pandemic. But I have so many jobs coming up, I’m not worried any more. We’re all going to age; everybody does from the moment they’re born.’

She intends to celebrate, loudly and proudly, her milestone 70th birthday next May. ‘I’ve got friends and relatives who are a lot younger than me and every birthday is such a kerfuffle. I intend to celebrate every year I am alive.’

There’s no doubt Stephanie benefits from good genes. With her striking features, prominent cheekbones and blemish-free skin, she could easily pass for a woman in her 50s or younger.

But her beauty regimen is, she insists, ‘very basic’. ‘I get sent all these wonderful products by brands that want me to try them out, and I do — but I’m afraid I always go back to good old Oil of Olay.’

Four years ago she did try Botox, but says it’s not for her. ‘All the young girls are having it done but I didn’t like it. I don’t need it. I’m doing a job because I am the age that I am; a little needle can’t change that.’

As for exercise, she’s not one for sweaty workouts, instead preferring to dance for half an hour every day, holding weights to work out her arms. ‘My daughter’s a DJ and singer, so I play her music and, when they’re allowed again, I plan on going to her gigs and dancing my heart out.’

Even after four decades in the business, Stephanie still struggles to admire photographs of herself. ‘Sometimes I look at them and think, “Why the hell didn’t they airbrush that?” I pick holes in my own work. Then after a while I’ll look back and realise they’re not so bad after all.’

She feels a sense of maternal responsibility towards younger models and makes a point of replying to girls who message her online asking for advice.

‘I try to be honest with them. I tell them it’s a difficult business and it’s not for everyone. Some of the loveliest messages I get online are from strangers, telling me I’ve inspired them and made them feel good about themselves.’

Stephanie herself draws inspiration from other ‘silver models’ in the industry, not least the glamorous Daphne Selfe, who, at 92, is officially the world’s oldest supermodel.

‘She’s the most amazing woman and, as I get older, I think of her and hope that there might be more work for me in the years and decades to come.’

As well as work, there is her first grandson — just nine weeks old — to dote on, family to spend time with and, she hopes, maybe a new relationship on the horizon.

‘I live on my own and I’ve already wasted over a year in lockdown not being able to go out and meet someone. I don’t believe in online dating; I want that old- fashioned, eyes-meeting-across-a-crowded room spark with someone. So I intend to make it happen.’

For now, she says, ‘I don’t look too far into the future. I believe that the best way to look after yourself is to live in the moment.

‘Get out there, have a great time and, above all, don’t always be good. A little misbehaving keeps us all young at heart.’