Big or small, upturned or straight, there’s no hiding your nose. Yet, inspired by surgery-loving reality TV and Instagram stars with ‘perfect’ profiles, increasing numbers of women are choosing to go under the knife to change their most prominent facial feature.

Here Radhika Sanghani, 29, founder of #sideprofileselfie — a social media campaign to encourage people to love their large noses by sharing profile photos — reveals how having her portrait painted finally taught her to love her nose…

The first time I realised I had a big nose is one I’ll never forget. Aged 11, and at an all-girls’ school, we were playing a game where we listed our best and worst features. When it came to me, it was unanimous: my best feature was my figure…and my worst was my nose.

At the time I felt confusingly flattered when they told me: ‘You’d be really pretty if you just had a smaller nose.’ 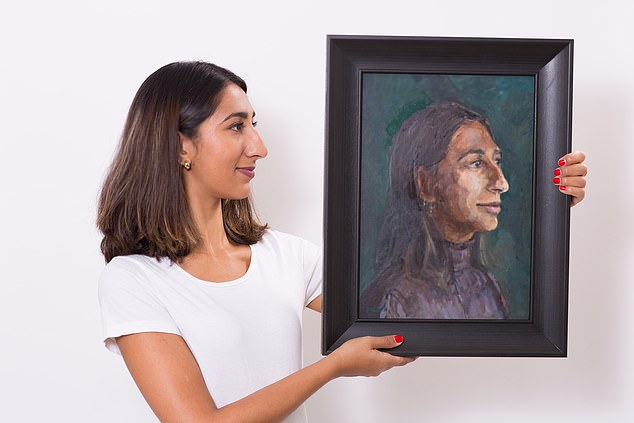 Radhika Sanghani, 29, founder of #sideprofileselfie reveals how having her portrait painted finally taught her to love her nose…

But when I got home, I stared at my nose in the mirror and realised they were right: it was too big to be beautiful. I felt a creeping sadness as it dawned on me it was never going to magically get smaller.

Over the years, I internalised the idea that — unlike button-nosed rom-com heroines — I’d never be attractive. I learned to avoid being photographed in profile and tried bold hair styles and eye make-up to try to detract attention from my nose.

Though my confidence improved in my 20s, I never imagined I might learn to love my nose. It didn’t feel possible, because I didn’t know anyone who had a nose as big as mine and loved it. There were only a handful of big-nosed celebrities, such as Barbra Streisand and Lady Gaga, and they weren’t seen as beautiful.

When the body positivity movement exploded on social media, and people began to celebrate fat stomachs and acne, I hoped big noses would get their moment. But it didn’t happen.

So one day last year, I decided that if no one else was going to celebrate big noses, I would. I took my first ever photo deliberately in profile and posted it on social media with the hashtag #sideprofileselfie, asking other big-nosed people to join me and try to see big noses as beautiful.

To my surprise it went viral within days and has now been used around 50,000 times. Suddenly my nose was being written about around the world and thousands of people were messaging me to say thank you for being brave enough to speak up.

It was amazing and hugely inspiring to see so many other women — and men — opening up about their insecurities. 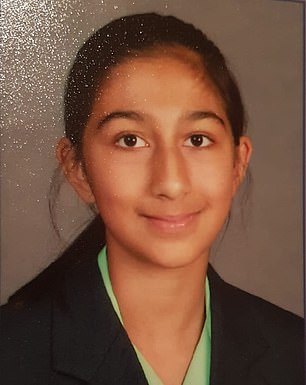 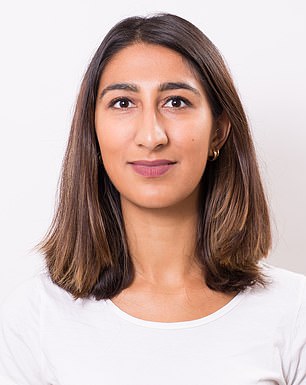 The first time Radhika realised she had a big nose is one she’ll never forget. Aged 11, and at an all-girls’ school, she was playing a game where they listed their best and worst features

But though I was being hailed as an icon, I still cringed every time I saw my nose in profile. While I was learning to see the beauty in it, after years of insecurity, I couldn’t help secretly agreeing with my 11-year-old self.

Until recently, that is, when I commissioned artist Nicholas Baldion to paint my portrait in side-profile.

It felt like the ultimate self-love challenge, and when I saw Nicholas’s previous work of other people with strong profiles, I knew he was the right person to do it. 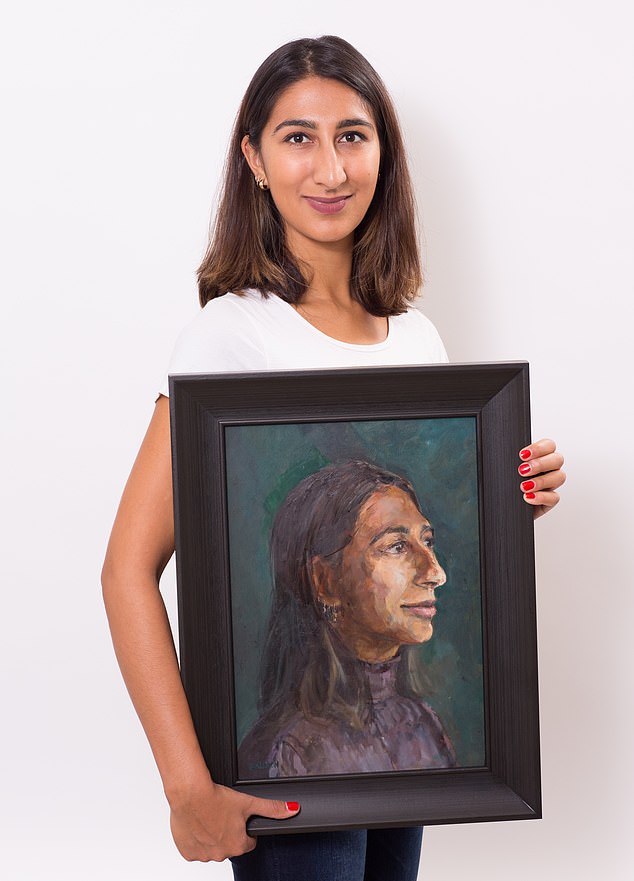 I’d never imagined posing for a portrait — it was something I associated with ladies of bygone eras, rather than millennials with smartphones.

But I loved the idea of celebrating my nose in such an elaborate way. I also hoped it would help me see it the way I do Picasso’s big-nosed subjects: beautiful despite not meeting society’s beauty standards.

Does the perfect nose exist?

As someone who spends virtually every waking moment thinking about noses, I can tell you what, technically speaking, constitutes the ‘perfect’ nose.

But I’m convinced you can be beautiful without the ‘perfect’ nose. Kate Moss’s nose has an asymmetrical tip. Does anyone care? Of course not.

The popularity of selfies has made things infinitely worse.

Equally worrying, I have begun to see young women coming in with photos of Instagram stars with unnatural artificial noses.

However, I’ve seen fantastic success stories, like the young woman who loathed her large, hooked nose. After surgery, for the first time, she felt confident enough to lop off the hair she used to hide it with.

What I hadn’t thought about was actually sitting for it. My first sitting — one of two, each two-and-a-half hours long — was hard. Nicholas spent a long time staring at my nose, and I felt myself sliding into panic. But after a while, I got used to it, and even tried to start enjoying it.

The final reveal was nerve-racking. What if it made me my hate my nose even more? But when Nicholas showed me the finished oil painting, I felt a rush of emotion.

My portrait self was beautiful. She may not look like a Victoria’s Secret model, but there was something unique and it was because of her profile, not in spite of it. If she didn’t have such a strong nose, she wouldn’t look so powerful and regal. And if that were true of my portrait self, surely it was true of the real me, too.

My portrait now hangs in pride of place in my flat. And the more I see her nose as beautiful, the more I do my own.

I don’t know if I’ll ever be 100 per cent free of body image insecurities. But, aged 29, finally I can honestly say that I love my nose.

It gives me character, strength and a queenly spirit no tiny snub-nose could ever hope to offer.

I FEAR ARREST… FOR MY MUG SHOT!

My schnozz has featured prominently in my life. And no wonder: it’s exactly 2.5 inches long with a bulbous bit on the end. Unfortunately my partner, Mickael, also has a large nose and I’m ashamed to admit I do worry that our four-year-old daughter, Sidonie, might have inherited our genes. She still has a beautiful button nose and I’m trying hard not to transmit my complex to her.

When she recently accidentally head-butted me, causing blood to pour from my nose, I might have slightly overreacted. It wasn’t the pain, but the thought my nose might look even worse.

As a teen, I wore my hair across my face and whenever I spoke to a boy I’d cup my nose in my palm. 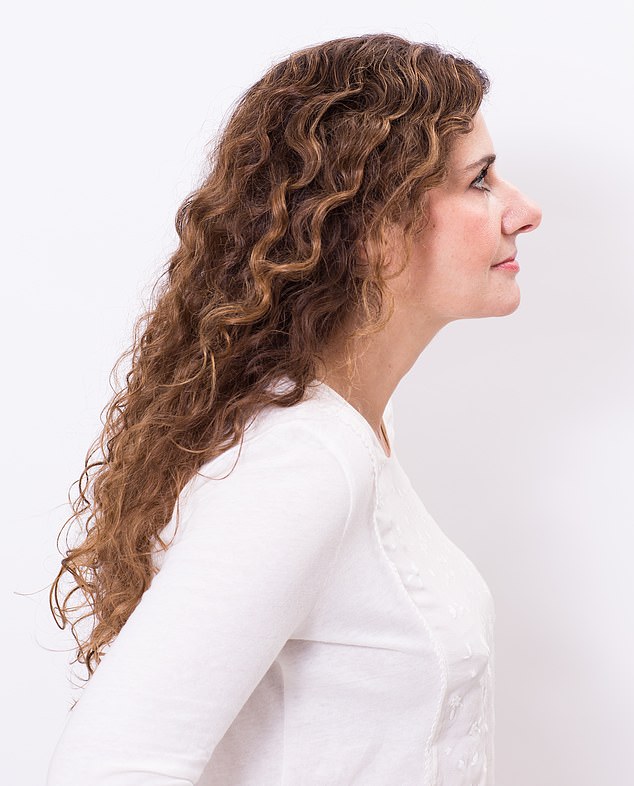 Hilary Freeman, 48, says as a teen, she wore her hair across her face and whenever she spoke to a boy she’d cup her nose in her palm

Even today, friends are forbidden from photographing me in profile; if I ever got arrested I’d worry more about the unflattering mug shots than the prospect of prison.

The time for a nose job has passed. I know it won’t change my life and have accepted my nose suits my face. But I could have done without knowing it will keep on growing till I die…

PRETTY BUT FOR MY ‘PIGGY’ NOSE

I was sitting in the back of the car on the way to see my grandparents when my mum craned round from the passenger seat and gave me an appraising look.

‘Do you know, if you didn’t have that nose you’d really be very pretty.’ I was 11 at the time.

She didn’t mean to be cruel; she was just telling it like it is and it wasn’t exactly news to me that my nose was not my best feature. 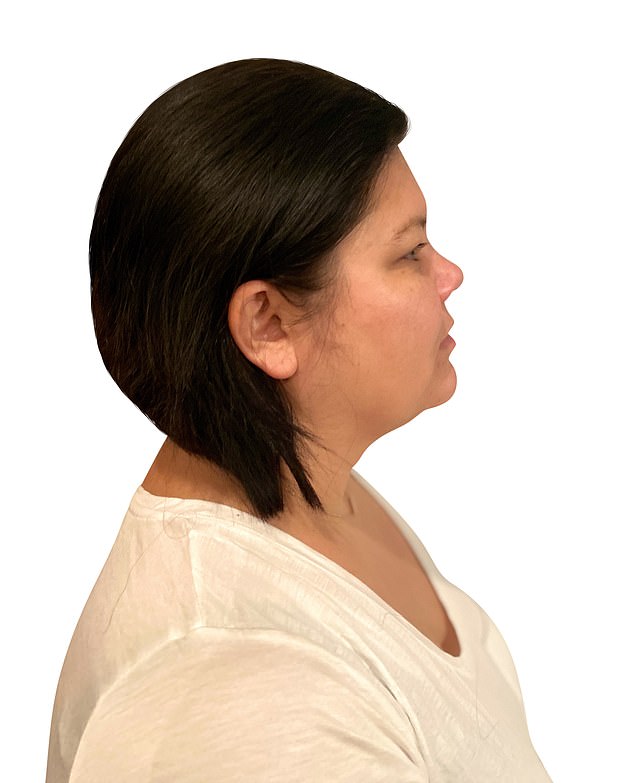 Ursula Hirschkorn, 48, says her nose is the product of a mix of Chinese and British genes many generations ago

With the maiden name of Biggs, I’d been christened Biggs Pigs from almost the first day of primary school courtesy of my snout of a nose.

The Biggs nose is the product of a mix of Chinese and British genes many generations ago. My dad and his dad before him sported the same broad, upturned snub, though it looks better on a man.

I like my eyes, my lips are full and my hair is thick and shiny. But the blight on the landscape has always been my nose. In most photos from my teenage years I am holding something up in front of my face to hide it.

I used to dream of having a nose job to turn it into a cute button, until I discovered this is the hardest and most painful nasal surgery. Now 48, I can’t say I love my nose.

But after four children, if I were granted three wishes to change parts of my body, my nose wouldn’t make it onto the list!

I WOULDN’T BE ME WITHOUT IT

I never thought about my nose until my early teens, when a group of girls decided to nickname me Concorde. From then on, I became hyper-aware of what I considered to be my massive conk. To this day, I do my utmost never to be photographed in profile — I even started parting my hair to the side after someone told me my centre-parting emphasised the size of it.

As I grew older, it became less about the aesthetics, and more that I felt my nose said things about me that weren’t true. 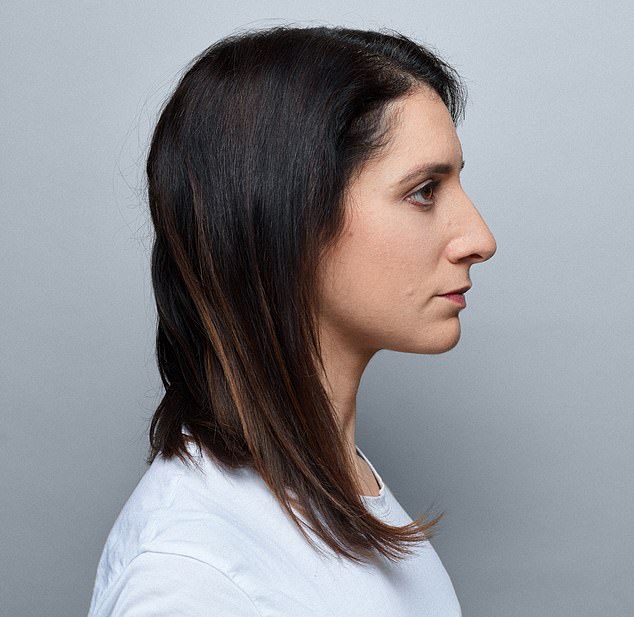 Claire Coleman, 42, says though her work as a beauty writer means she knows plastic surgeons, she’s never made moves to change it

My parents were both brought up in Jewish families, but religion was never important to them — so much so that they sent me and my sister to a C of E school — I’m definitely more Jew-ish than Jewish.

Though my work as a beauty writer means I know plastic surgeons, I’ve never made moves to change it. For a start, I don’t know which nose I’d choose in its place.

But also because a few years ago, I interviewed a couple who had both had nose jobs, and subsequently a baby.

It made me think how curious it was that the child wouldn’t have either of their noses — but one they had rejected. How do you explain that to a child? And what message does it send?

For while I might not have chosen my nose, I wouldn’t be me without it.