A Twitter user has blasted YouTubers who alter plus-size clothing to fit them, claiming they’re taking options away from fat people.

Ophelia Brown from Canada took to Twitter to express her frustration after watching a YouTube clip by US influencer Nava Rose, demonstrating how plus size jeans bought in a secondhand shop can be upcycled.

Nava cut and sewed the waist of a pair of jeans that were too big for her, to achieve a chic belted look, but Ophelia was not impressed, saying: ‘Buying plus sized clothing from thrift stores so you can tailor the items down to fit your size 0 body ISN’T A CUTE YOUTUBE VIDEO IDEA.

‘It’s fatphobic and classist and taking resources away from poor and fat people who have an infinitely harder time finding clothes than you do.’

Over 1,000 Twitter users voiced their views, with many arguing that Ophelia failed to consider the challenges of shopping for small sizes. 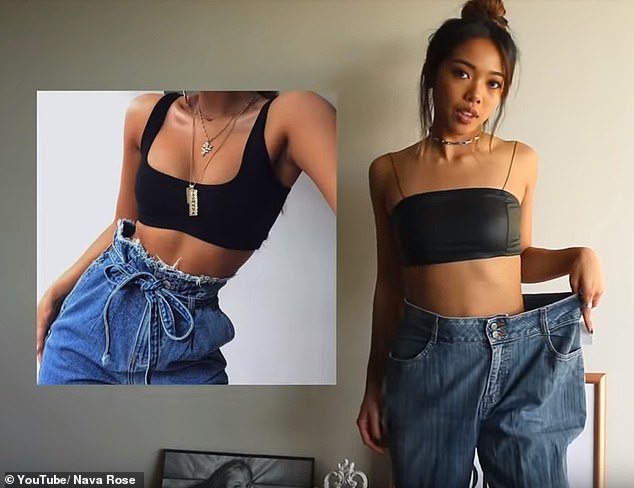 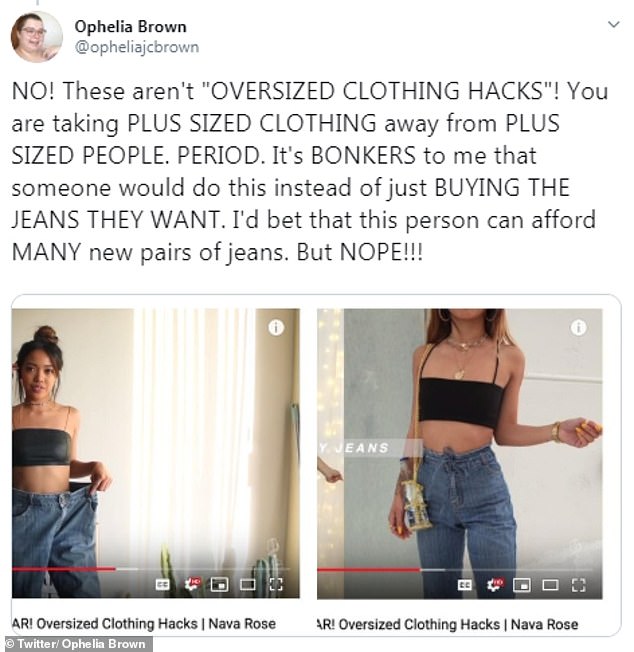 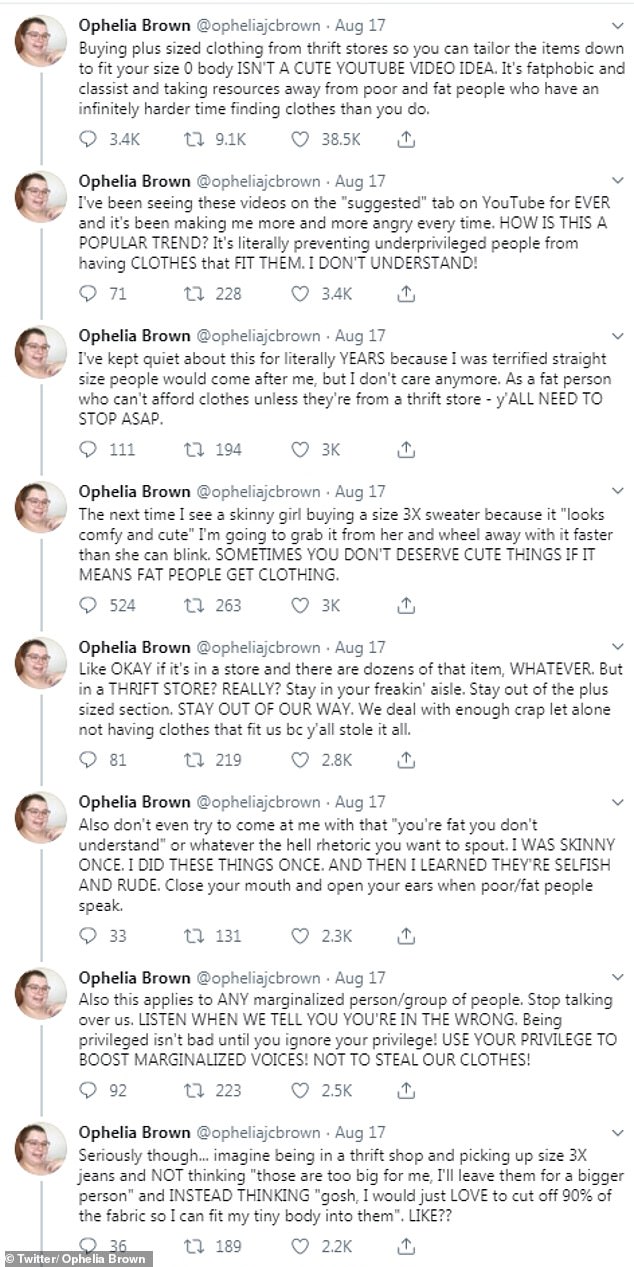 Posting their response to the YouTube video, Ophelia said: ‘NO! these aren’t ‘oversized clothing hacks’! You are taking PLUS SIZED CLOTHING away from PLUS SIZED PEOPLE. PERIOD. It’s BONKERS to me that someone would do this instead of just BUYING THE JEANS THEY WANT. I’d bet that this person can afford MANY new pairs of jeans. But NOPE!!!’.’

One person wrote: ‘If you go thrift shopping as a size 00/0 you will not find anything in that size. Buying in a bigger size and adjusting to fit is a great way to save money, being small/short can be an issue too’

Another said: ‘I respect your opinion but as a fat person myself, I don’t see how buying bigger clothes is fatphobic. They are oversized for these peoples bodies, they’re not calling fat people oversizes. Thrift stores are replenished often, they’re not gonna run out of plus size clothing.’

A third added: ‘Saying that size 0 people can’t buy size X of clothing is size-phobic. It’s ridiculous to look at someone and their size and judge them on the size of clothing they buy.’

A flood of responses to the post accused Ophelia of searching for a reason to be offended and being judgmental.

‘It doesn’t matter?! I don’t see why you got easily offended, she did a great job with those jeans they’re so cute, she didn’t insult anyone like please stop and let her be,’ wrote one.’

Another said: ‘Girl, you need to stop. Chill out. This isn’t fatphobic in any way. There are alot of clearance sales at stores where you can shop for larger sizes and thrift shops are always first come and first serve. You all just need a reason to be offended in the first place.’

However, a number of Twitter users agreed with Ophelia that people shouldn’t buy clothes larger than their size to upcycle.

One person wrote: ‘I think the OP is talking about a specific trend in social media where women buy plus-sized clothing from thrift and show how “cute” it is by remaking it into clothes for thin women. Totally different than buying & tailoring clothes because you need them, I think!’

Another said: ‘I think it’s different when you’re upcycling a few sizes above normal. But going from a 22 to a 4 sucks a lot for the size 22 women who can’t find those clothes in the thrift store anymore. And it’s not like they can take a size 4 and upcycle it to fit.’

A third added: ‘I don’t think that OP is saying you can’t tailor any clothes! Just that if you are a smaller size, like your examples of being xxxs, you don’t need to buy a 3XL to tailor it down and instead can buy a regular small size if that’s your goal.’