‘The whitest of white privilege’: Influencers are blasted for using Black Lives Matter protests to gain ‘clout and followers’ as videos of their ‘shameful’ photo shoots in front of marches and looted stores are posted online

A series of videos showing Instagram users posing for photos in front of looted stores, marches, and burning vehicles have been shared online, prompting fury from social media users who have slammed those in them for their ‘shameful’ behavior.

In one clip posted by Twitter account Influencers In the Wild shows a woman posing for a photo in front of a looted T-Mobile store in Los Angeles, standing in front of its smashed windows with her back to the camera as a man snaps the image, before the pair walk off. 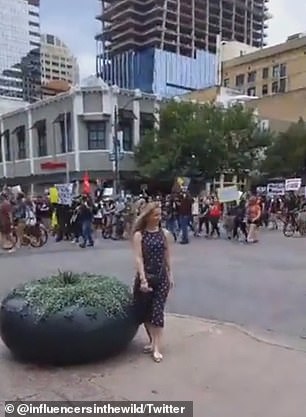 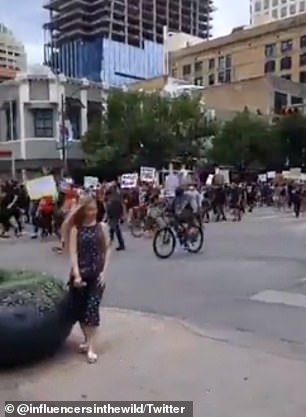 Outrage: Videos of influencers posing for pictures in front of Black Lives Matter protests have sparked fury on social media 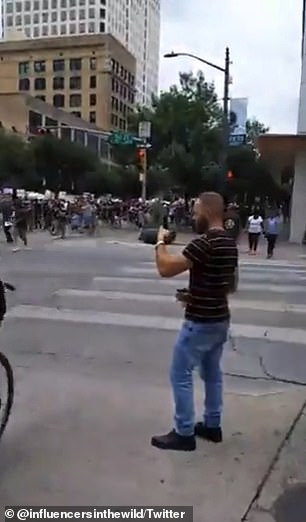 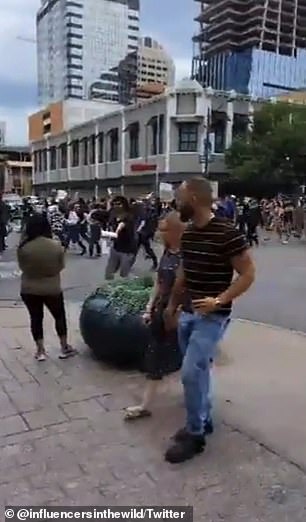 Speaking out: Many of the clips have been shared on Twitter account Influencers In the Wild, including this video of a woman posing for a photo in front of a march in Austin, Texas 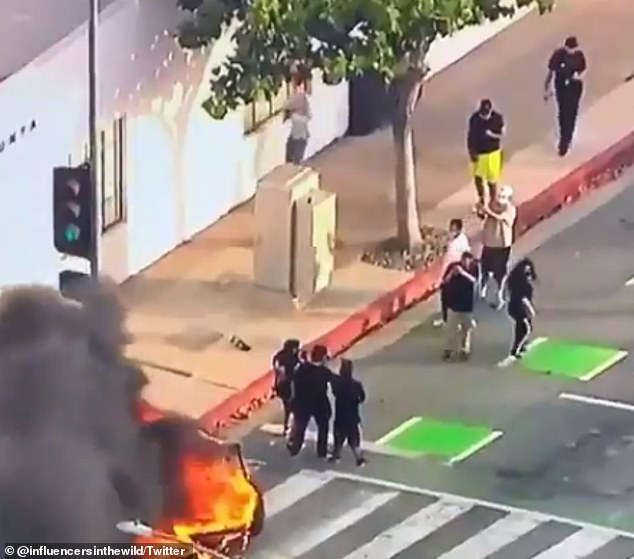 ‘Shameful’: The clips, including this one of a group of men posing in front of a burning vehicle in Los Angeles, have been condemned by social media users

Hitting back: Influencers In the Wild has called out a number of Instagram users, sharing videos captured by shocked onlookers

Another video shared on the same account shows a woman in a dress posing on a street corner in Austin as hundreds of protestors march down the street behind her. She is seen adjusting her hair while a man holding a phone takes the photo.

The pair then stroll down the street hand-in-hand, apparently not interested in joining the peaceful protest.

In one video, which appears to have been taken from an apartment building that overlooks a main street, three men are caught posing in front of a vehicle that has been set on fire, before running off.

One other influencer was caught on camera by an onlooker posing for a photo on a street in Miami that had been barricaded by police in anticipation of the protests, standing near some large orange-and-white bollards while a man kneels down in front of her to capture her posing in front of a raised bridge.

‘The police barricaded the street for the protest, and this girl took it as an opportunity to get a picture in the middle of an empty street? GTFOH [Get the f**k out of here],’ the caption read.

Twitter users have responded to the videos and posts with fury, with many voicing their outrage in a series of posts that slam the influencers as ‘shameful’ and ‘oblivious’.

‘Man, people really be out here selling their soul for clout, huh,’ one person wrote in response to a video. ‘Narcissism is a dangerous illness,’ another added.

One influencer, who uses the account name @serafina.0 on Instagram, was named and shamed by critics after a screenshot of a conversation she had with a friend about ‘getting drunk’ and attending the protests was widely reposted online.

In the texts, which Serafina posted to her ‘close friends’ Instagram Stories, her friend, who goes by the Instagram name @tamella_k, asked whether the pair of them ‘should go protest’, to which Serafina responded: ‘I’m lowkey down.’

Tamella then suggests that the duo ‘get drunk and go’, asking ‘is that like so dangerous’ before Serafina replied: ‘Omg I’m so down. Let me find a riot outfit.’

Later that same day the pair shared an image of themselves posing at a Los Angeles protest, with Tamella captioning the image: ‘Plz do your part but do it safely. #BLM go out there and do your part we owe it.’

The duo quickly found themselves at the center of a furious online backlash, with Instagram and Twitter users blasting their actions and accusing them of shamelessly abusing the protests in order to gain likes and followers. 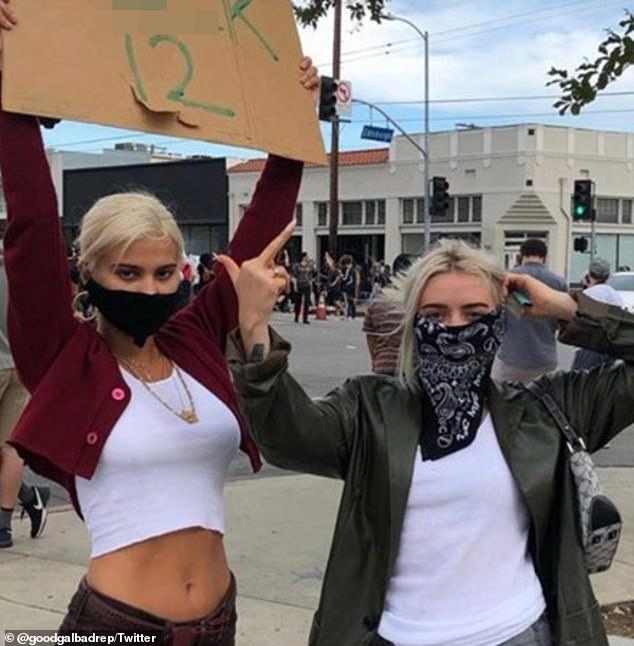 Controversy: Influencers @serafina.0  and @tamella_k prompted furious backlash after they discussed ‘getting drunk’ and going to a protest, before sharing this image 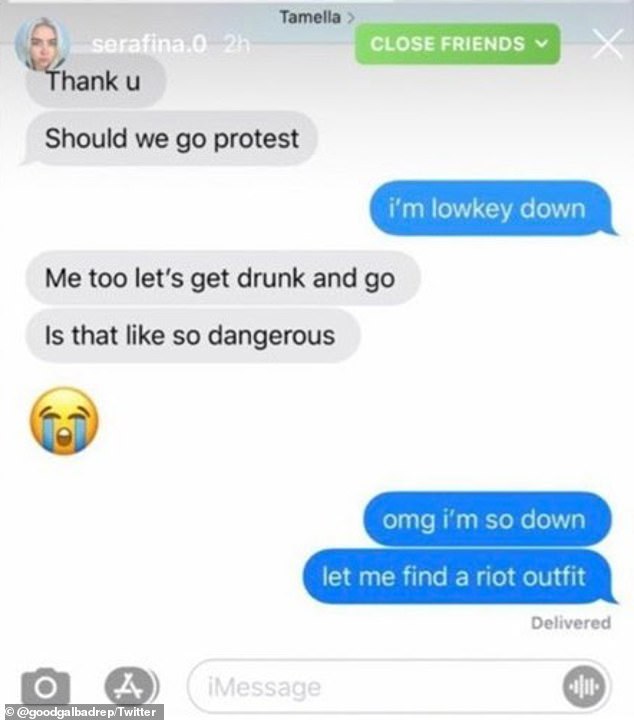 Outrageous: Serafina shared this screenshot of a conversation she and Tamella had about the riots and protests, which was later reposted online

While Tamella later deleted her Instagram account in response to the criticism, Serafina posted an apology on her feed, insisting that she is ‘not asking for forgiveness’, but that she wants to prevent anyone else from ‘making this mistake’.

‘Yesterday I did something extremely ignorant by glamorizing rioting on social media,’ she wrote.

She continued: ‘As overwhelming as the constant hate / death threats have been since the post went viral, I am grateful to be held accountable for this insensitive mistake. I never should [have] used the a protest as an Instagram opportunity.

‘Though it was not my priority in attending, I still took part in a performance act and did not realize how counterproductive that was to the movement, because I’m clearly dumb.’

The ongoing exposure of Instagram influencers ‘shamefully’ taking advantage of the protests for personal gain comes after a conservative journalist was accused of ‘performance activism’ after she posed with a power drill outside a boarded-up business in LA.

Video emerged on Monday of the woman borrowing a drill from a construction worker as he erected plywood outside a business to prevent looters or rioters from breaking in.

A man believed to be her boyfriend snapped a photo of her pretending to drill a hole into the wood before she thanked the construction worker, ran to a Mercedes and drove off.

Hitting back: Social media users slammed the influencers, with many accusing them of treating the Black Lives Matter protest like a festival

‘White privilege’: Others fired back at the influencers and Instagram users in question, calling out their decision to show such a lack of respect towards the movement

The video was met with swift backlash from hundreds of people condemning the ‘disrespectful’ and ‘self-promotional’ stunt.

Commenters quickly identified the woman as Fiona Moriarty-McLaughlin, whose Twitter bio described her as a ‘Commentary’ journalist with the Washington Examiner.

The critics pointed out that Moriarty-McLaughlin had previously denounced protesters taking to the streets to demand justice after George Floyd, a black man, died when a white Minneapolis cop knelt on his neck during an arrest on Memorial Day.

The video, posted to Twitter by @ewufortheloss, racked up more than 24 million views by Tuesday evening.

‘This lady stopped someone boarding up a store in Santa Monica so she could hold the drill for a picture, then drove away. Please don’t do this,’ the caption read.

In a follow-up thread, the poster explained: ‘The problem here is that she’s 1) using this terrible situation to promote herself instead of the man who’s actually helping and 2) completely insensitive to racial / class tensions. 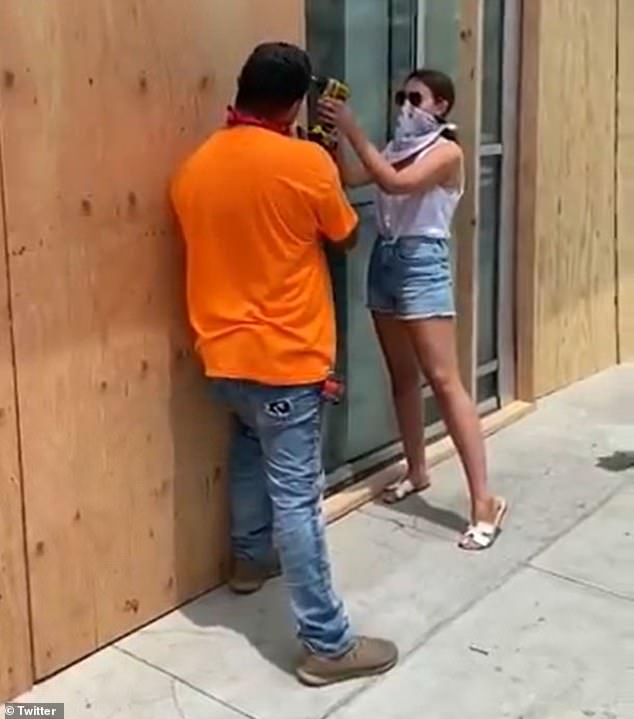 Shocking: Video emerged on Monday of a woman – identified as Fiona Moriarty-McLaughlin – posing for a photo with a power drill outside a boarded-up store in Los Angeles 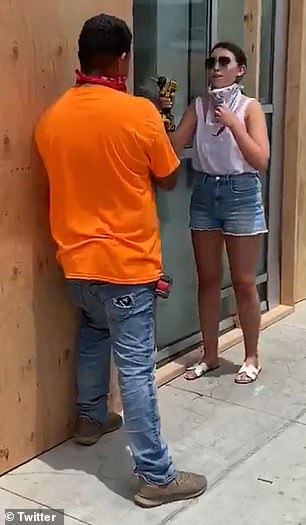 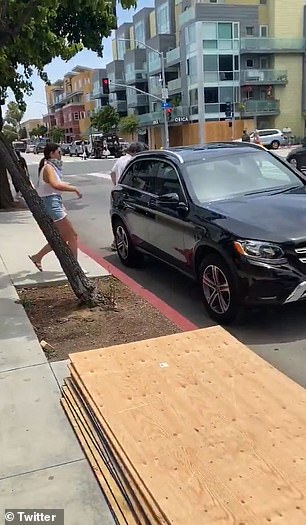 Fake: A man snapped a photo of her pretending to drill a hole into the wood before she thanked the construction worker, handed the drill back, ran over to a Mercedes Benz and drove off

‘Influencers: use your platform for ACTUAL good, not the PERCEPTION of good.’

Among the users condemning the woman’s actions was filmmaker and director Ava DuVernay, who tweeted: ‘You know what? I’m… I think I’m gonna put Twitter away for a few minutes before I throw this phone across the room.’ 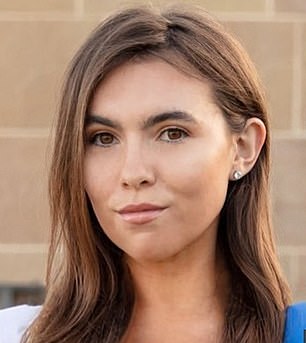 Under fire: Moriarty-McLaughlin is shown above in her Twitter photo

‘So utterly awed by this,’ the official Refugee and Immigrant Center for Education and Legal Services (RAICES) Twitter account wrote in response. ‘Influencer culture at its worst.’

In a later tweet @ewufortheloss asked commenters not to ‘doxx’ or release personal information about the woman in the video.

‘Let’s use this as something that helps us understand what’s right and what’s wrong, rather than an opportunity to brand someone for life,’ they wrote.

Several other commenters, some of whom claimed to know the woman in the video, confirmed that it was Moriarty-McLaughlin.

Exposed: The video was originally posted on Twitter by @ewufortheloss, who explained why the woman’s actions were problematic in a subsequent tweet (pictured)

Under cover: @ewufortheloss asked people not to expose the identity of the woman in the video, but her name came out regardless

Criticism: Among the users condemning the woman’s actions was renowned filmmaker and director Ava DuVernay

Speaking out: New York Times reporter Taylor Lorenz is believed to be the first one who identified Moriarty-McLaughlin 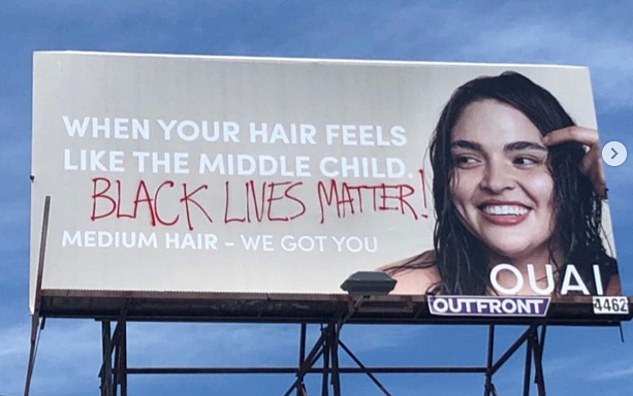 Fury: Moriarty-McLaughlin garnered negative attention on Sunday when she criticized a Los Angeles protester for spray painting an Ouai billboard with the words ‘Black Lives Matter’

Pride: Ouai founder and celebrity hairstylist Jen Atkin replied to the video Moriarty-McLaughlin posted with a message of support for the protesters

After the video went viral, Moriarty-McLaughlin appeared to delete her Twitter account and switched her Instagram to private in an apparent effort to hide from further backlash.

The journalist has not addressed the video publicly and did not immediately return requests for comment from multiple media outlets.

Monday’s video marks the second time this week that Moriarty-McLaughlin has garnered negative attention on Twitter.

On Sunday she posted a since-deleted video of a Los Angeles protester spray painting an Ouai billboard with the words ‘Black Lives Matter’.

‘BREAKING: As if vandalizing all the buildings in LA wasn’t enough @Blklivesmatter has taken to the billboards as a crowd of rioters roars in approval. #GeorgeFloyd #LARiots,’ she wrote in the caption.

Ouai founder and celebrity hairstylist Jen Atkin replied to the video with a message of support for the protesters.