Tom Daley has offered fans a glimpse into his Christmas celebrations with his family on Instagram.

The Olympic diver, 28, shared a number of snaps on social media with his 3.4million Instagram followers as he marked the festivities with his husband Dustin Lance Black and their son Robbie, four, at their south London home.

Among the photographs were images of the couple making cocktails and their son opening presents under the Christmas tree.

Tom has been married to Dustin since 2017, and they are fathers to their son Robert, who they welcomed to the world via surrogate in June 2018. 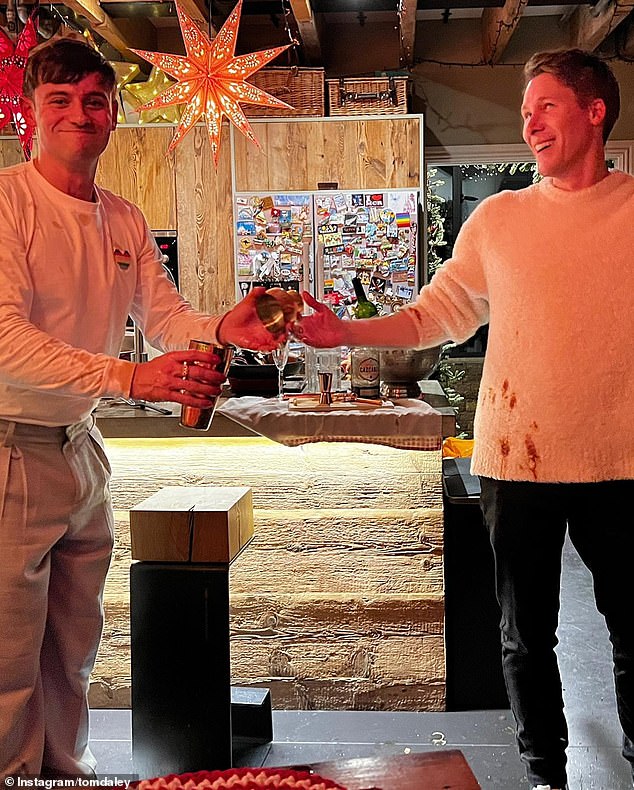 Among the snaps, Tom and Dustin were pictured making a cocktail which had exploded across Dustin’s white jumper.

Other photographs show the diver topless as he sorted through a game of Dragatha Christie.

The pair moved into the converted hop-processing plant in 2017 and architects added an extra floor to the apartment, creating a triplex from a duplex with attic. 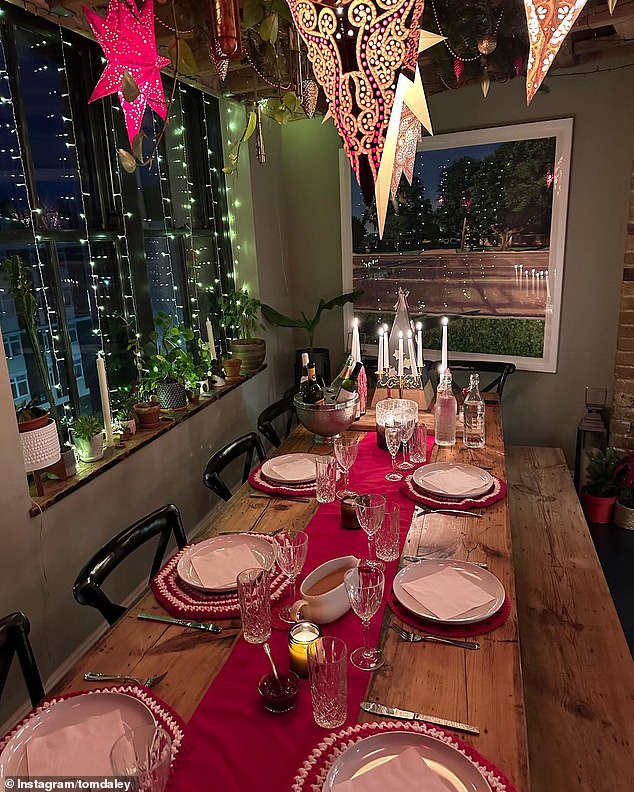 The Olympic diver, 28, shared a number of snaps on social media with his 3.4million Instagram followers as he marked the festivities with his husband Dustin Lance Black and their son Robbie, four 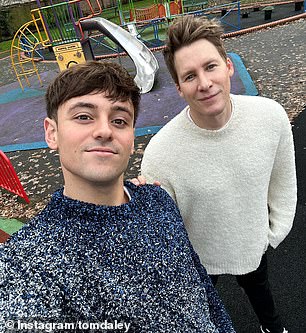 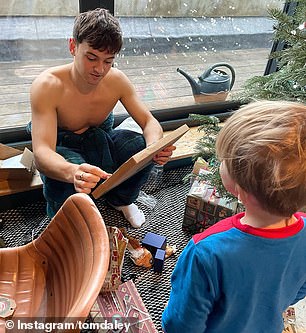 Among the photographs were selfies of the couple at the park (left), while another image showed the diver with his four-year-old son (right) 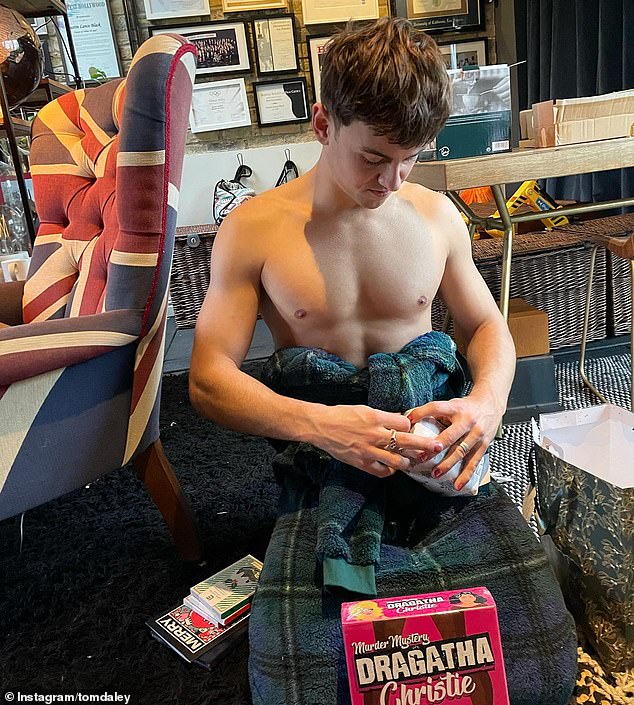 One photograph showed the Olympic diver topless as he sorted through a variety of different games, including one called Dragatha Christie

Their home includes a small Union Jack flag hidden in the top corner of their busy living room shelf.

Their sofa is patterned with the flag and was by British furniture designer Timothy Oulton, currently priced at £4945.

It comes after the diver revealed he blasts out All I Want For Christmas Is You by Mariah Carey whenever he wants to clear people out of his house.

Days ago the Olympic medal winning diver said he plays the diva’s famous 1994 single once he becomes of sick of guests. 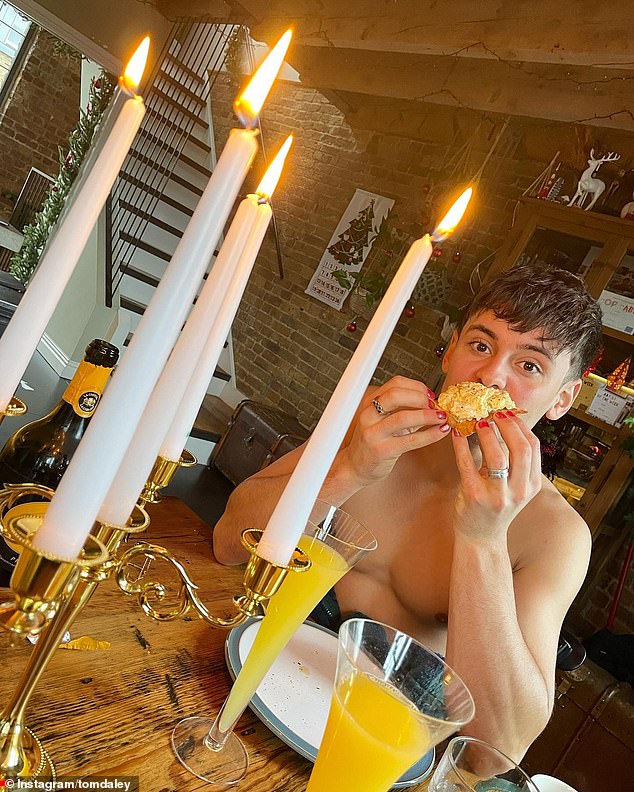 Christmas breakfast! One snap showed the diver with painted red nails as he enjoyed a drink of orange juice and scrambled eggs

He claims it is the perfect song to signal the party is over, no matter what time of year.

The father-of-one told the Table Manners podcast: “My favourite song is Mariah Carey, All I Want For Christmas Is You.

‘I know it’s probably everyone’s favourite, but it is the song, if I ever host barbecues or parties or anything, no matter what time of year it is, it’s always the last song that plays. Even in the middle of summer, it plays.

‘If I ever want to clear out the house, and say “we’re done, it’s over”, I play that song and people love it and then they’re like “oh actually maybe I should leave now”.’

And television personality Tom says his offspring begs him begs him to stop knitting, a favourite hobby of the sportsman. 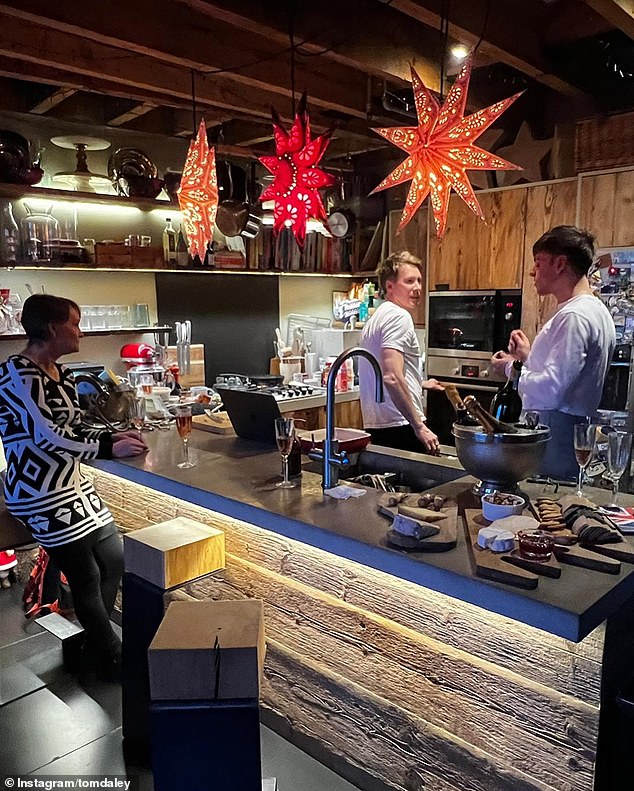 He recently told Prima magazine: ‘I love making stuff for my son Robbie.

I’ve made him so many jumpers and cardigans.

‘It has got to a point where I sometimes get the needles out and he’s like, “Papa, no more knitting.”

‘But he’s been asking for a hat for a while so that’s my next project.’

Tom became famous for his knitting after he sat in the stands creating a Team GB jumper during the Olympic Games Tokyo 2020 in Japan.