The Berejiklian government's decision to move the Powerhouse Museum, restrictions on live music and the adequacy and integrity of arts funding have become lightning rod issues for dissent within the arts community on the eve of the election.

The National Association for Visual Arts (NAVA) has called for transparency in arts funding decisions and investment in artists as it became the latest peak industry group to release a ”report card” on the major parties' arts policies ahead of Saturday's election. 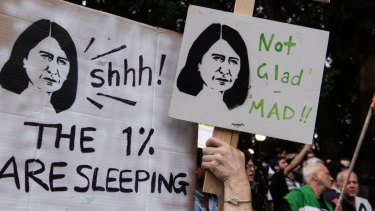 The move comes after the extraordinary intervention of the Balnaves family foundation which this week placed full-page ads in national media pointing to a disparity in arts funding – "a miserable $542 million" – compared with the sector's economic contribution and asking voters to consider the state's ''cultural future'' at the ballot box.

The philanthropic foundation – which supports the Museum of Contemporary Arts, Story Factory and Bangarra Dance Theatre among other leading arts organisations – claimed the NSW Liberal government ''doesn't get the arts''.

Not since the election of Paul Keating in 1993 had the role of arts taken such election prominence, said NAVA's executive director Esther Anatolitis, who represents contemporary arts organisations across Australia.

''Arts and culture have become hot election issues for all the wrong reasons,'' Ms Anatolitis said. Political interference in arts funding decisions, the ''unexplained'' billion-dollar relocation of the Powerhouse Museum and restrictions to festivals and live music were part of the election time ''public conversation'', she said. 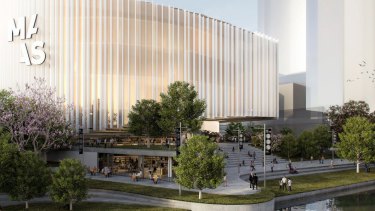 Conceptual drawing of the new Powerhouse Museum at Parramatta.

The state government is promising completion of an ''unprecedented'' $928.5 million investment plan in arts and culture including the transformation of the Opera House Concert Hall, the Sydney Modern project, a proposed new regional art gallery in the Southern Highlands, the redevelopment of the Walsh Bay Arts precinct and expansion of the Australian Museum's touring exhibition halls.

But reports of political interference in arts funding decisions have alienated some sectors and the Powerhouse Museum is a thorn in the government's side with Labor, the Greens and the Shooters, Fishers and Farmers' party all opposed to its relocation and campaigning for a new dedicated purpose-built museum for western Sydney. Labor has committed $45 million to restoring the museum on its current site, $500 million on a “cultural institution” in Parramatta and a doubling of the Regional Cultural Fund to $200 million.

The music industry is also deeply unhappy with the government's new regulations for music festivals and restrictions on live music venues. Fourteen festivals found to be "high risk" by the state government's panel of experts have been asked to apply for a new licence after a summer in which five people died at music festivals.

Live Performance Australia and the Australian Festival Association are encouraging voters to support candidates who ''support live music'' when deciding who to vote for on Saturday.

Disgruntled music festivals like Splendour in the Grass and St Jerome’s Laneway Festival are running Facebook ads warning fans live music is under threat in NSW.

''In the last days of the election campaign my message to all parties is, inspire us with what's possible,'' Ms Anatolitis said. ''Particularly the onus falls on the minister [Don Harwin] at this time to make it absolutely clear what he is committed to, what his vision is for the future, and how he will bolster that vision with truly defensible public integrity.''

The Arts Party is restructuring itself and did not field candidates this time but have issued their own report card canvassing everything from regional arts investment to the repeal of festival regulations.

The single issue party, Keep Sydney Open, is running on a repeal of lock-out laws, and wants an independent "Office of the Night" to stimulate the night-time economy as well as a Ministry of Culture, Music and Nightlife for a seat in Cabinet, like that proposed by Labor.