Have you seen what the influencers of Instagram are up to now? Tired of posing for selfies while dining in the latest "it" restaurant, with armfuls of designer shopping bags, or in the pool as they sip sundowners in an exotic location, they have finally discovered the relatively low-key pleasures of… the cheeseboard. 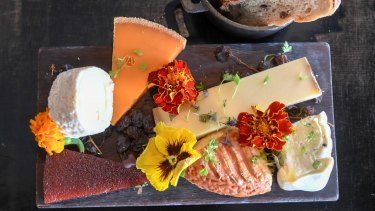 Long gone are the days of a few hunks of Stilton, Brie and Camembert.Credit:Justin McManus

A well put-together platter was once the preserve of the middle-aged dinner party. But, in the hands of the social media-savvy generation, it's being taken to the next level altogether.

So long gone are the days when a few hunks of Stilton, Brie and Camembert, topped off by a bunch of grapes and slices of membrillo, raises a murmur from appreciative house guests. These days, it's not a cheeseboard unless you're displaying your bounty like a 16th-century still-life.

And it's not complete unless the cheeses in question – we'll get to those shortly – are surrounded by wedges of dripping honeycomb, a tumble of pistachios, pretzels, popcorn, artichoke hearts leaving a slug's trail of olive oil, peppy pink slices of grapefruit, and, for some reason, orchids.

Meanwhile, the hashtag #cheeseboard has clocked up half a million posts, #cheeseboardsofinstagram collates the most outstanding examples of "cheeseboarding" – as the online art form has inevitably been called – and it's de rigueur to refer to yourself as a "cheesefluencer" in your online bio.

The brains behind the @thatcheeseplate account, which has racked up just shy of 100,000 followers, recently told Harper's Bazaar how she'd given up her day job to become one full time.

Cheeseboarding is a growing industry, according to Toria Smith of UK cheese outfit Grape and Fig (grapeandfig.com). "When I got married, I didn't want stuffy canapés," says Smith. Catering companies offered cheeseboards, but none "got the aesthetic I wanted. They were doing celery and grapes in ramekins, so I had to style and design it all myself – on the morning of my wedding."

She now runs the business full time as demand for these artfully styled cornucopias is so high. Her spreads are so Instagrammable that Instagram itself is a client.

In comparison, the cheeseboard is still modest and elegant, even if it now has a flirtatious couple of figs on the side. If you're a board purist – well, hard cheese.