Tomato-tomato, castle-castle – plenty of words offer alternative pronunciations. Tripwires of speech, the dilemmas range from Sarah-moany versus serra-munny, to the rib-heavy Caribbean over the same archipelago with a dominant bee. 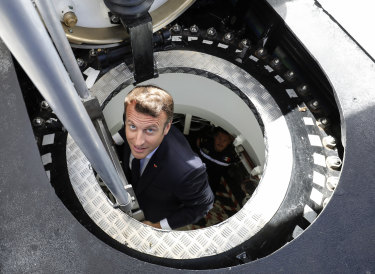 French President Emmanuel Macron inspects a new nuclear submarine at the Cherbourg shipyard in 2019. He was less than pleased with Australia’s backflip over the collaboration to build 12 subs.Credit:AFP

Yet when three nations form one security pact, we’d best agree on the acronym. It’s awkward otherwise, as I learnt last week, discussing a certain submarine deal with Dr Remy Davison, a leading expert in diplomacy.

Our chat was going swimmingly. After intros, we turned to the rancour emerging from France. In diplomatic terms, President Emmanuel Macron was less than pleased by Australia’s backflip over the collaboration to build 12 subs.

Not just subs, but diesel-powered Shortfin Barracudas to the tune of $90 billion, a fleet set to usurp our rickety Collins-class vessels. Then came the U-boat U-turn; Australia teaming with America and the UK, switching from diesel to nuclear, from Barracuda to Seawolf, giving rise to AUKUS.

Neat on paper, the acronym is boosted by a maritime fluke, the fusion opening with a sea eagle (AUK) and closing with KUS, Afrikaans for coast. There’s balance too, each participant claiming two letters, dovetailing into a compact five. Better still, to fulfil its acronym quality, the coinage is pronounceable owing to that felicitous vowel sprinkle.

But then we hit a rock, Remy and I, five minutes into our chat. The master of diplomacy favoured “ow-kus” over my “or-kus”, the studio’s atmosphere turning a tad awks. Do I correct him, I wondered, or is he correcting me?

Isaac Goldberg, an American journalist, defined a diplomat as one “who can do and say the nastiest things in the nicest way”. Perhaps this was Remy’s test, a meta-gotcha built into a geopolitical natter about tact, where his ow-kus was the phonetic equivalent of the pea under the princess’s mattress.

In dilemma terms, AUKUS looms as our latest GIF, less in the meme than the phoneme sense. You can keep your debatable tomato, this was breaking news, and needed urgent settling. If Macron was feeling cantankerous at Canberra’s big renege, then imagine the umbrage among ABC listeners if a broadcaster plumped for the wrong diphthong.

When in doubt, turn to the horse’s mouth. Here the stable housed President Joe Biden, in company with PMs Johnson and Morrison, all of whom favour the aw-kus version. I’d deemed the acronym watertight, until meeting Remy, a UN global expert, and the Jean Monnet Chair in Politics and Economics at Monash. In short, a bloke likely to know.

If Macron was feeling cantankerous, then imagine the umbrage among ABC listeners if a broadcaster plumped for the wrong diphthong.

Acronyms are treacherous like that, since both utterances are defendable. Your GIF is my GIF, your ALDI my ALDI. While the wonks responsible for the alphabet-cobbling may peddle one pronunciation, the populace can always disagree. I learnt that when Sue Warren, an English teacher, emailed a query: “How would you say NESA?” The acronym derives from NSW Education Standards, and Sue stood in the “neesa” camp, staring daggers at the “nessa” majority.

Timidly, I waded in. Nobody is wrong in these sort of debates – that was my first point. My second, I thought Sue was wrong. Given education’s short-e, the nessa-gang made more sense to my ear, but it was hardly worth waging a nuclear war over.

Meanwhile, returning to our on-air AUKwardness, I sidestepped Remy’s ow-kus in favour of referring to “the pact”. After all, Will Durant, another American writer, claimed diplomacy to be “the art of saying nothing, especially when speaking”. Or pronouncing, as the case might be.

By way of reprieve, at least our submarine chat managed to steer clear of the ship-versus-boat barney. Sacre bleu, imagine that! The audience would have turned ballistic.