I’m not sure what to make of The Rehearsal, but I am utterly in awe of it. After four episodes I have no idea where it’s going, nor how much of it is scripted and how much is “real”. It is bewildering, exploitative and frequently insane, but it’s also the most exciting thing on television right now.

Created by, directed by and starring Nathan Fielder, The Rehearsal is best understood as a reality version of The Truman Show. Its participants are living fake versions of anticipated scenarios so they can be better prepared for the real thing. But unlike Jim Carrey’s character in Peter Weir’s terrific 1998 film, they know they’re in a constructed version of reality – to a degree at least. 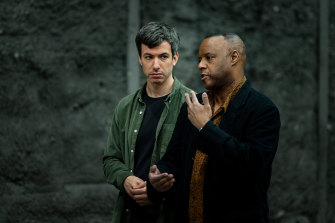 Nathan Fielder, left, with his first participant/patsy/victim, Kor Skeete, in The Rehearsal.Credit:Foxtel/HBO

Assuming they’re not merely actors pretending to be rubes who don’t know what they’ve gotten into (and it’s an open question), there’s little doubt some participants agreed to be in a reality “experiment” but had little idea precisely what the terms of engagement were going to be.

It’s a safe bet, for instance, that Patrick, the befuddled star of episode three, titled Gold Digger, didn’t anticipate he’d actually be digging for gold with some old guy he’d just met, or end up wiping said guy’s butt in the woods in the dead of night. All he wanted was some help with convincing his brother to stop seeing his girlfriend as a gold digger (geddit?) and let him have the money his grandfather had left him in his will.

After a cathartic moment in which Patrick broke down in tears while telling an actor playing his brother “I’m tired of living like it’s the day after he died, so please let me move on, let me have it” he disappears. Was it, as Fielder suggests, because “maybe for some people the rehearsal is enough?” Or was it because he’d finally twigged that the whole thing was a massive prank, that he and his arse-wiping-in-the-woods moment were the butt of some elaborate form of cringe comedy? 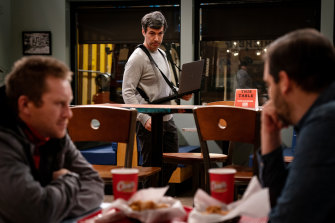 Fielder watches on as Patrick (left) and the actor playing his brother rehearse a critical future ‘scene’ from Patrick’s life.Credit:HBO

In episode four, which airs on Sunday, Fielder throws the spotlight on the mechanics of his project, and the level of awareness participants have, or don’t. In The Fielder Method Nathan trains actors in how to impersonate the real-life people they will play, then asks them to go ever deeper – taking on their jobs, their names, living in their houses – in search of authenticity.

“How much is enough,” he asks himself in the voice-over narration. “How do you know you truly understand someone?”

Playing the role of one of his actors, Thomas, so he can experience the experiment from the other side, Fielder receives a stack of pages, the legal release forms he is meant to sign so that footage of him can be used in the show. “So many pages,” Nathan-As-Thomas says. “Everyone seems to be signing it, so it must be all right.”

Writing in The New Yorker last week, critic Richard Brody ripped into Fielder over a perceived lack of care for his subjects. “Deception prevails throughout,” he wrote, deriding the Canadian’s “gaze of superiority and dominance” as “arrogant, cruel, and, above all, indifferent” and saying “his cleverness masks the hollowness of his schemes”.

Brody is far from alone in his reservations, and I share them to an extent. I’m surely not the only one who detects a hint of emotional and/or psychological vulnerability in some of his patsies. But what redeems The Rehearsal (quite aside from the fact it is often hilarious) is its underlying, and thus far unstated, thesis: we are all just freaks and fakes stumbling our way through a constructed version of the life we think we should be living.

Fielder sums up his ostensible project in the first episode thus: “Maybe it’s easiest to choose a path when you can live the future first, to free yourself from doubt and regret, to always know the answers.”

But I’m convinced his real project is precisely the opposite – to demonstrate that no amount of planning can guarantee us the perfect outcome, because humans are not robots, they cannot be programmed, and random variables will always arise.

Besides, the very idea of the “perfect” life is also in Fielder’s sights.

His earlier series Nathan For You traded on his supposedly “really good grades” at business school (actually pretty average, as the screen shots attest) to set up a faux Kitchen Nightmares-style let-me-fix-this-broken-enterprise scenario. Now, though, the playing field isn’t just a business, it’s a whole life.

Consumer capitalism and the self-help industries are built on the idea that we can make ourselves happy by buying that thing, realising that goal, fixing that flaw. But the sordid truth is it is dissatisfaction, not perfection, that drives the entire system.

The Rehearsal functions at a meta level, I think, as a commentary on the way the ubiquity of cameras, social media and indeed of reality television has blurred the line between “actors” and “real people”. So many of us are performing idealised versions of ourselves for public consumption that we’ve become adept at mimicking connection, understanding and empathy without ever necessarily experiencing it. But maybe it was ever thus.

At its core, the show is about alienation rather than perfection, the fact that no matter how hard we try, our ability to connect is transitory at best, whether we’re neurodivergent or not, and no matter how many goes we have at it.

“Every now and again there are these glimmers, these moments when you forget and you feel like a family – that’s when you know the rehearsal is working,” he says in episode three, and really, he’s talking about all of us.

I suspect that for all its origami layering of narrative structure, its onion peeling of characters within characters, its elaborately constructed sets and scenarios, at the heart of The Rehearsal is a pretty simple proposition: try as you might, you can’t plan for every eventuality. So stop trying, lighten up, live in the moment, experience it as it happens.

It might not be perfect, but it may just be real as it gets.