Is this the most embarrassing fitness class yet? Yes! But who cares, says DAISY WAUGH — because it will boost your mind and your body in time for summer

How do you persuade the lazy mass of humankind that exercise can be fun? It’s the million-dollar question. And the answer is . . . not by lecturing them about health risks and making them feel like Fattypuff losers. I think we all know that. Not by forcing them into a gym, either. There are few things more dismal than a visit to the gym. I think we all know that, too.

Every now and then, another PR-minded fitness maestro comes up with a new ‘fun’ solution to the age-old problem. Spinning! Aqua Zumba! Pole Dancing! Sober Morning Raving! Doga (yoga with a dog)! But nothing ever catches on. Or not so that it lasts.

Regular exercise, for most adults, remains just one more chore to feel bad about not doing, close behind cleaning the oven.

Masses may sign up to a gym or to Aerial Hoop Flying Fantastic classes (don’t ask), but they soon return to the sofa to squabble over what to watch on Netflix. 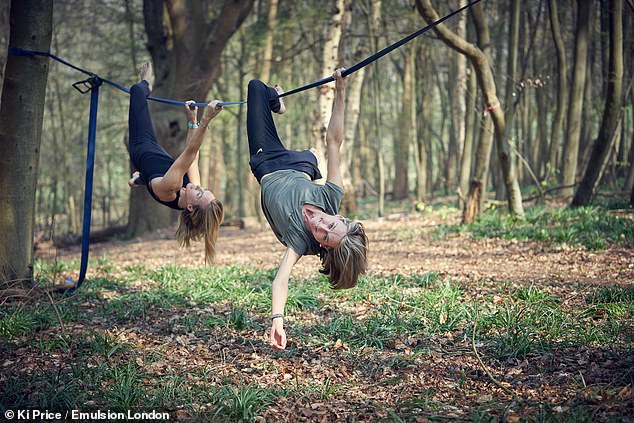 Daisy Waugh (pictured right) gave her verdict on Wildfitness, which is the brainchild of Tara Wood who lives in South Africa

Enter Wildfitness. It is the brainchild of magnificently wholesome Tara Wood, who spent her childhood in Kenya and her early adulthood at Oxford University studying biology. Now in her 40s, she lives with her son Leo, two, in South Africa.

She wanted to offer a new approach to personal fitness that was less about feverish self-improvement and more about the pleasure of movement. Or even the pleasure of being alive.

By doing things because they feel natural and because we were built to do them — running, jumping off logs and climbing trees — Tara’s Wildfitness method can, so she says, ‘free us from our zoo mentality and help us find our wild mindset’.

Sound like claptrap? Maybe so. But stay with me, because it’s wonderful. The idea is to introduce people to the sort of robust, effortless fitness a wild animal takes part in: not simply physical fitness, but fitness of being.

And not because it means they will squeeze into their jeans more comfortably by the end of the week (though they probably will), but because the experience will be joyful and liberating.

A wild animal, Tara explains, has a ‘heightened alertness to environment and a sense of purpose that is noticeably dulled in zoo animals’.

Zoo animals, isolated from their natural environment, ‘suffer mentally, physically and spiritually as a result’, she claims, adding: ‘This is a powerful metaphor for humans. Isolate us from nature and we suffer.’

Modern life is spent indoors, removed from nature, yet the evidence stacks up that humans thrive better when they spend time closer to nature.

Wildfitness attempts to reintroduce people to their ‘animal’ or ‘ancient’ selves, simply by inspiring us to eat more naturally, move more freely and spend more time outside. 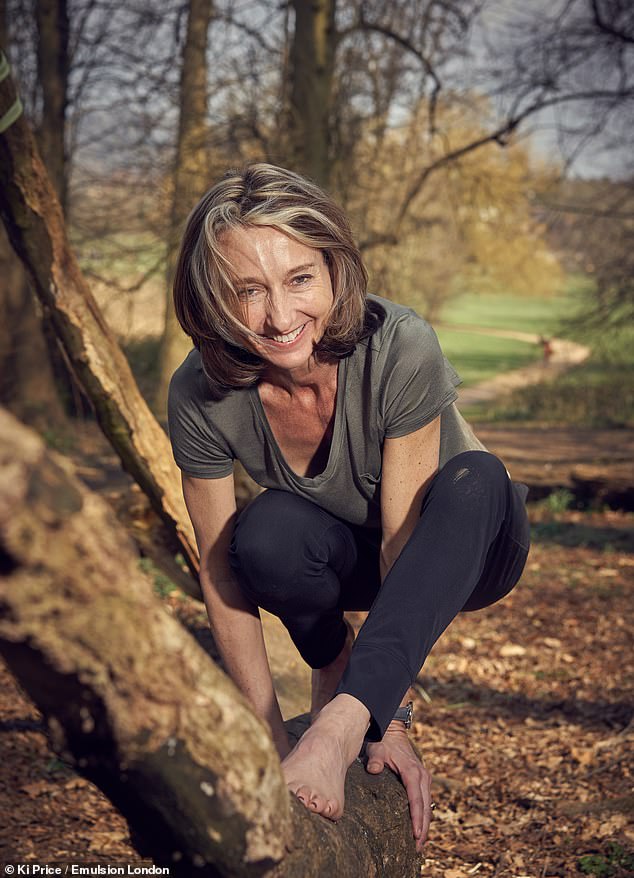 ‘Get people to eat fresh food and be physically active outside and, within days, an incredible blossoming and awakening occurs,’ says Tara.

After two weeks on her courses, living in harmony with nature, Tara says that she has witnessed guests’ skin disorders, depression and even diabetes fade away.

Which sounds marvellous. But, in practice, what does ‘rewilding’ entail? I spent a morning on a taster Wildfitness ‘experiential retreat’.

The retreats normally last a full week or more on the Spanish island of Menorca. Mine, however, took place over a morning in the slightly less glamorous, but infinitely more convenient, Reigate Priory Park in Surrey. While the longer retreats also focus on food, hanging out with nature and general relaxation, my morning session concentrated exclusively on movement.

I’ll begin on a negative note because that’s how, I’ll admit, I started the day — thoroughly sceptical. We were a group of seven or so. The others were mostly in their early 40s, mostly professionals. We had the added pleasure of a hipster yoga teacher who, with his long ponytail and Good Vibes T-shirt, looked like he’d come straight from Central Casting.

Our three-hour session began with an interminable warm-up, which involved, for several long moments, standing barefoot in a circle, slowly rotating our ankles.

Aye, aye, here we go, I thought. This is pretty fatuous. Yet one more attempt to reinvent the wheel. Nobody’s going to free their inner wildness by wiggling an ankle on a Saturday morning in a park in the middle of Surrey. 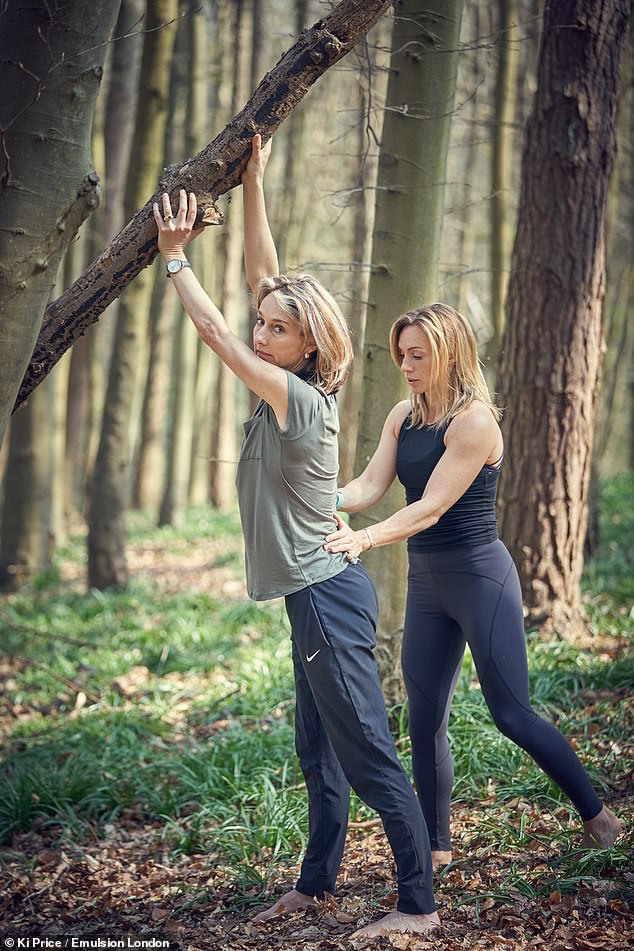 Added to which I strongly suspected that, as a group, we looked like idiots — a suspicion confirmed when a gang of young lads ambled up to giggle and stare. One of them shouted out: ‘Excuse me, are you all vegans?’ It was quite funny. But not relaxing. And also not the case.

Things got better. The group of lads wandered off and the warm-up ended at last.

While we’d been rotating our ankles the senior trainer, Natalie, also known as Nala, had been running around setting up an obstacle course for us in the park’s wooded hills.

Nala is a living, breathing advertisement for Wildfitness philosophy. She runs — never walks — with the fleetness of Disney’s Pocahontas (or Nala, the lioness in The Lion King: hence, I presume, the nickname).

Remember how we used to run, instead of walk, when we were children? It was one of the things adults endlessly told us off about. Well, somewhere around the age of 12 we listened — and stopped.

But I don’t think Nala ever did. And you can see from the way she moves how natural it is to her and how much pleasure she takes from the process.

Back in London, my desk overlooks a popular running track. I watch hundreds of healthy, self-disciplined people jogging past my window every day (in fact, I’m often one of them). 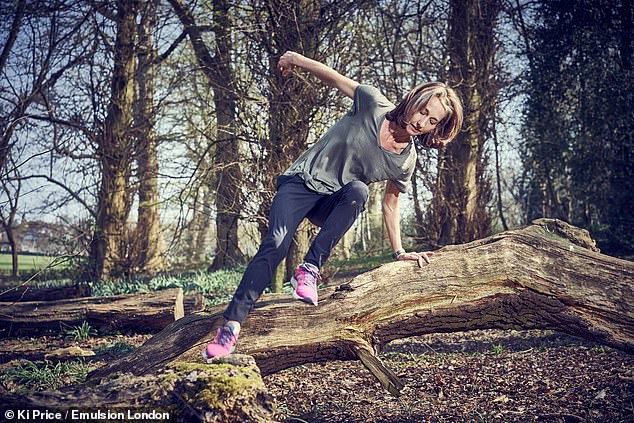 Fat, thin, old and young: some are having an OK time. But not one of them, us, runs with joy, as a child runs. It’s this joy that Wildfitness is trying to reintroduce.

Nala’s obstacle course wasn’t difficult. There were trees to climb, branches to drag, paths to crawl along, sacks of sand to chuck, slacklines to hang off, logs to lift and logs to balance on.

‘Imagine there are crocodiles on either side,’ says Nala. ‘If you fall off, they’re going to eat you.’

But I was already imagining that. I presume, quietly, we all were. Nobody tightropes along a log, in a wood, without imagining snapping crocodiles on either side of them, do they?

It’s just that, as we reach our teens, most of us don’t bother to tightrope along logs at all. We are too busy taking life too seriously to remember that log-balancing (and I hope this doesn’t sound embarrassing) is quite good fun. Ditto tree climbing and hanging off slacklines.

At the end of three hours, the class was back in a circle in the grass, barefoot and exhausted — not wiggling ankles any longer, but sticking our bums in the air for the downward dog. 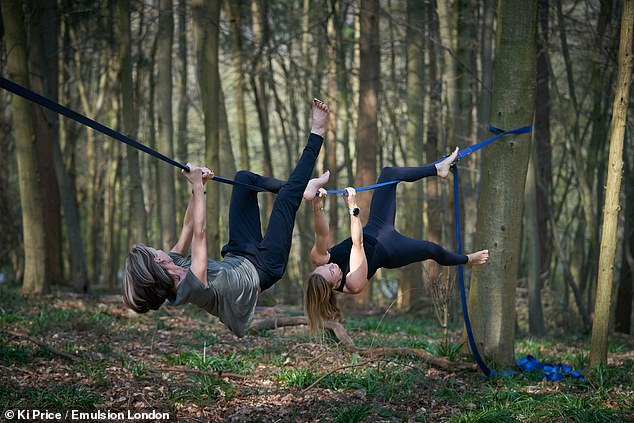 I don’t know if we’d released our inner animal, but there was, without a doubt, a sense of carefree merriment in the air.

It happens that I exercise anyway — tennis, hot yoga, running — and, after an asthmatic childhood and chain-smoking early adulthood, I love it. But this, a morning of mucking about in the woods, was better.

Much better than running. Better, even, than a competitive game of tennis. There were no winners and losers. No vanity at stake. This was carefree fun.

It was fun to be outside in the sunshine and fun to hang upside down and, as long as nobody was looking, it was fun to pretend to be avoiding crocodiles.

And yes, of course, it’s easier to enjoy exercise when you are already fit. It’s easy to take pleasure in movement if movement doesn’t make you ache and sweat and pant.

The trick, I suppose, is in finding an enjoyable, diverting way to get through that initial barrier of unfitness. Because then (holy cow), who knows what inner animal may be liberated from the sofa?

Never mind reinventing the wheel. This is pre-wheel stuff. Just do it.

Other ways to work out in nature

Best for: Sleep and hormone balance.

What is it? An outdoor gym that boosts daylight exposure to recalibrate circadian rhythms. Classes feature ‘woodland cardio’, squats with logs and rowing machines set up outside.

What is it? Fitness through conservation. Sessions get you in shape via activities such as planting trees and sowing meadows in local green spaces.

What is it? A Japanese practice to help heal mind and body. It’s a sensory ‘bath’ that involves walking into a forest and soaking up the atmosphere. Sessions can lower blood pressure and decrease depression and stress-related illnesses. Scientists even believe chemicals released by trees could boost immunity.

Cost: £30 for an organised three-hour session.