The first episode of Wolf Like Me opens with an offering of wisdom from Groucho Marx. “Blessed are the cracked, for they shall let in the light.” At first glance it seems like a clever observation used by the writer as a jumping off point into what might be an otherwise conventional romantic comedy/drama. But when all breaks loose, you slowly realise you’re somewhere quite different. 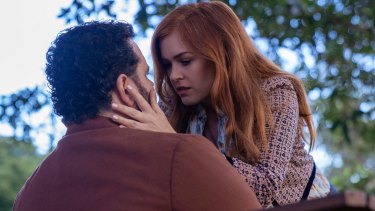 Josh Gad and Isla Fisher in Wolf Like Me.Credit:Stan

Meet Gary (Josh Gad). He’s a 40-year-old single father, with a daughter on medication, who has never quite recovered from the death of his wife Lisa. Into his life slams Mary (Isla Fisher), an advice columnist whose day job is helping other people solve their problems. Which would be fine, if it was not obvious that her life is also a wreck.

At a time when a lot of storytelling feels mythologically dense, it’s unexpectedly refreshing to step into a new world with no expectations. (And this is from someone who stays up well after his bedtime to watch The Book of Boba Fett every week.)

In Wolf Like Me, writer-director Abe Forsythe has built a genre-bumping dodgem car, driving alongside romantic comedy and drama, but moving in and out of its lane when it chooses to. The result is a show that takes a moment to pin down, but feels wonderfully richer the deeper you go.

A more academic mind might call it a character piece, and that’s not far off the mark. Each episode unfurls layers of character, each one adjusting your perception ever so slightly. (Or, in the case of episode two, as though a 25-tonne truck has come flying through the front window and landed in your brain.)

In truth, while they seem different at first glance, Gary and Mary aren’t so far apart. They are two people who are completely broken inside, going through the motions of daily life, clinging to a veneer of normality – particularly Mary. The show’s big notes are big, but you get a sense of its real power in the smaller, more tender moments. In one scene, Gary encounters a couple with a newborn child and his pain comes to the surface.

There are echoes here of the most sophisticated emotional comedies. BBC Two’s wonderful Marion and Geoff springs to mind, in which Rob Brydon played an estranged husband. Or Ricky Gervais’ After Life, which does an uneasy but magnificently navigated dance around the subject of grief. But there is a lot more that we can’t discuss. To quote Doctor Who’s River Song: “Spoilers, sweetie.”

Wolf Like Me is beautifully assembled. Cinematographer Germain McMicking (True Detective, Nitram) captures the becalmed world of Gary and Mary nicely, diving into the crazy as the story requires. Oddly, there is no credit for vehicular choreography, which is surely an oversight. At times Wolf Like Me feels like a game of Grand Theft Auto.

It also feels unexpectedly current, dipping into the inertia, melancholia and underlying frustrations of contemporary life, without leaning on clumsier or more obvious name-checks about the state of life (and the world) in 2022. The setup suggests Gary and Mary are slightly out of phase with the world. And as you watch you might wonder whether, in the topsy-turvy, hazy, crazy times of 2022, the world is simply out of phase with them. And then Forsythe swerves into your ponderous lane and slams you into the next layer of the story.

Wolf Like Me is engaging, startling and, packed with droll dialogue, hilarious when TV convention tells you it shouldn’t be. Unashamed to lace moments of tenderness with a sense of the ridiculous, it is a deftly crafted wolf in sheep’s clothing.

*Stan is owned by Nine, the owner of this masthead.