I first heard about the trend of teenagers dressing up in their best suits to watch Minions: The Rise of Gru, the latest release in the MCU (Minions Cinematic Universe), via TikTok. My friends and I immediately thought that if we didn’t engage in it, we’d regret it for the rest of our lives. We talked it out, set a date and arrived in our formal outfits.

My outfit mainly consisted of my dad’s clothes, with my hat being a recent addition that I had bought for the opening night of Moulin Rouge! The Musical. My attire was very much inspired by my favourite character from my favourite show, Alfie Solomons in Peaky Blinders. 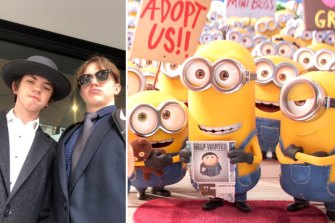 Sam Hart, left, is one of the hundreds of Gentleminions watching the latest Minions movie.Credit:Sam Hart / Universal Pictures

We all wore suits to celebrate the historic milestone of being able to view what we consider the peak of cinema. The movie rivalled classics such as The Godfather, and we all deemed it right to go in suits for such a historic moment. There were other teenagers at the cinema who decided wearing suits was only right for such an event, too.

We tried to avoid disrupting the movie as we understood we weren’t the only people who wanted to savour the picture. But there were times you couldn’t help but clap and cheer, such as the appearances of young Vector and Bob the Minion.

We felt an almost primal wave as the first round of claps and cheers washed over us, caught up in a sea of whooping and whistling. The movie had this ability to connect everyone in this almost, for lack of a better word, celestial way. You feel in touch with everyone else who is wearing suits, and no matter who you are, you are welcome. It cast this spell on me as it tore down boundaries, uniting all people, no matter the difference. 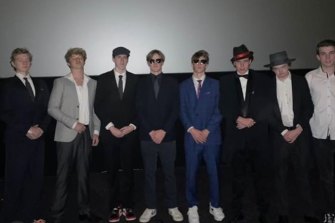 The Gentleminions visited the cinema – and loved it.Credit:Sam Hart

I can’t lie: I did genuinely enjoy the film. I felt a childlike joy when a character such as Bob, Kevin or Stuart got up to their usual shenanigans, and at one point in the film I did genuinely laugh. The film relies heavily on slapstick comedy instead of written jokes, which should get tiring, but it’s the very thing I’ve come to love about the MCU.

And when all is said and done, this release lived up to others in the franchise. The music was impeccable, the animation was silky, and it had a good lineup of actors. The plot could’ve had a bit more substance and the resolution felt like a bit of a letdown.

But the whole thing helped me realised you don’t get the same auditory and visual experience when watching a movie at home. The experience has made me enjoy going to the cinema more. I give it three-and-a-half stars.

Sam Hart is a year 10 student at Mosman High School.