“Let me tell you the story of a man named Charlie. …”

As sure as the train is roaring down the tracks, it’s the cautionary tale of Charlie, the Everyman who gets caught up in Boston’s soul-crushing subway system, whence he will never return.

Jacqueline Steiner, who died on Jan. 25 at 94, was the lyricist who conjured up poor Charlie early in her singing and songwriting career. She and the song’s co-writer, Bess Lomax Hawes, dashed it off for a Boston mayoral candidate in 1949. They expected it to fade after the election along with their candidate, who received only 1 percent of the vote.

But 10 years later, the folk music group the Kingston Trio picked it up. With a slightly new spin, the trio gave it a second life, and their “At Large” album, with the song, “M.T.A.” (also known as “Charlie on the M.T.A.”), as the opening track, hit No. 1 on the charts.

“M.T.A.” received an astonishing third life in 2004, when Boston officials did away with subway tokens and issued an automated fare card. They called it the CharlieCard, which is still its name. At the ceremony showing it off, Gov. Mitt Romney heartily joined the Kingston Trio and belted out the song.

The original version written by Ms. Steiner and Ms. Hawes and based on the tunes of two old folk songs, had a political edge. They wrote it for a progressive candidate named Walter A. O’Brien, who opposed the latest fare increase. Subway riders would pay a dime to get onto a train, but if they transferred to an aboveground streetcar, they had to pay an extra nickel to exit. (The system was so complex that the M.T.A. issued a 15-page booklet with instructions for both riders and subway operators; the agency ended the system after only a few months.)

Charlie, alas, did not have that extra nickel.

His absent-minded wife came down to the station every day, but instead of handing him a nickel, “through the open window she hands Charlie a sandwich as the train comes rumblin’ through.” (Ms. Hawes wrote the sandwich verse, which Ms. Steiner always believed gave the song its punch.)

Charlie was thus doomed to “ride forever ’neath the streets of Boston / He’s the man who never returned.”

After the election, Mr. O’Brien was deemed a Communist and blacklisted. The clean-cut Kingston Trio, trying to advance their careers in the midst of the McCarthy era, generally avoided overtly political songs. They sanitized the Steiner-Hawes version of “M.T.A.” and changed the name Walter O’Brien to the fictitious George O’Brien.

The song remains embedded in Boston’s collective unconscious and is something of an unofficial city anthem.

It has also served as a metaphor for other horrors, as when a Soviet cosmonaut was stranded in space after the 1991 breakup of the Soviet Union; Fred Small wrote a parody called “Sergei in the Milky Way,” based on the Kingston Trio’s arrangement. 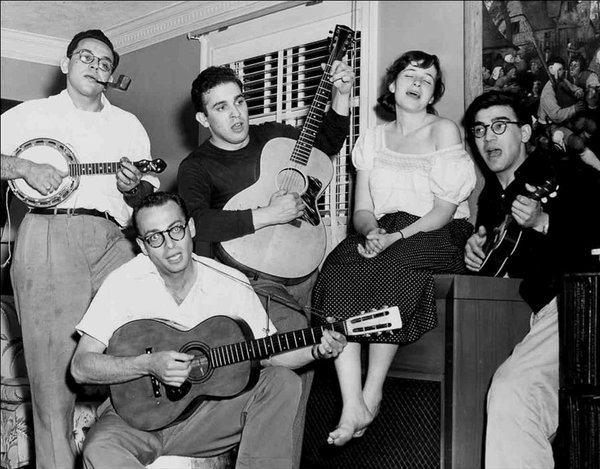 Some in Boston find an enduring poetic resonance in Charlie’s plight. Thomas Whalen, a social scientist at Boston University, said that with the fare increase, resentment toward the onerous arm of government and hints of corruption, the song taps into a rich vein of Boston history.

“Charlie is caught in that political vortex, as we all are in Boston,” he said in a telephone interview. “It’s this Kafkaesque nightmare — Charlie can’t get off that train.”

Jacqueline Steiner was born on Sept. 11, 1924, in Manhattan to Joseph and Jane (Lippert) Steiner. Her father was a clothing retailer, her mother a telephone operator. Her parents divorced when Jackie, as she was known, was a toddler, and two aunts and sometimes her mother raised her, mostly in Greenwich Village.

Jackie skipped a grade and arrived at Vassar College at 16. She graduated in 1944 with a bachelor’s degree in philosophy, then headed to Radcliffe to study philosophy but dropped out to pursue a career as a folk singer and songwriter, taking odd jobs to support herself. It was while she was living in Cambridge that she and Ms. Hawes, who died in 2009 at 88, wrote “M.T.A.”

Her son, Matthew Sharpe, said his mother died from complications of pneumonia in Norwalk, Conn., where she lived. In addition to him, she is survived by her daughter, Susanna Sharpe, and five grandchildren.

Ms. Steiner was always politically active, starting with the peace and civil rights movements in the 1960s. In Norwalk, she served for many years as secretary of the local branch of the N.A.A.C.P.

A mezzo-soprano, Ms. Steiner was passionate about singing and playing the guitar. She sang at hootenannies with Pete Seeger and others and studied voice with Max Margulis, a founder of Blue Note Records, who also coached Judy Collins.

She also recorded two albums. The first, “No More War,” which she recorded in 1966 as Jacqueline Sharpe, consisted entirely of original antiwar songs. The title track, “No More War,” was based on a 1965 speech by Pope Paul VI at the United Nations. On her second album, “Far Afield: Songs of Three Continents,” released in 1991, she sang her own version of “M.T.A.” as well as songs in multiple languages.

As a singer for hire, Ms. Steiner sang solo and in choirs, at churches and synagogues. She even sang for prisoners at Sing Sing. She often hummed around the house, her son said, usually classical music.

But at parties, he said, someone would inevitably coax her — “and it didn’t take much coaxing” — to bring out her guitar and sing “M.T.A.”

“She wasn’t famous, but the song was famous,” he said. “And it gave her great pleasure to have created something known by so many people, and that had such enduring value.”