Cosby mocked Jennie's accent at one point, before the mess spilled online after the episode aired.

Mary Cosby was back in the hot seat on “Real Housewives of Salt Lake City” on Sunday night, over culturally insensitive comments she made about both Jennie Nguyen and Jen Shah.

The prior episode, Cosby offended Nguyen during a luncheon Jennie hosted celebrating her Vietnamese heritage, as the women looked at a photo of Nguyen in a blonde wig. “Ooo nice, I like the slanted eyes. Love it,” said Mary — and while Jennie didn’t say anything to her costar at the time, she was seething in a confessional. 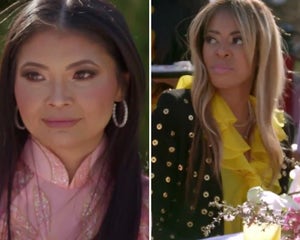 On the new hour, Jennie explained to husband Duy how the comment made her feel. “I was very frustrated, I was very mad,” she told him.

“It is insulting to our Asian culture to call me that, and it comes across racist,” she added in a confessional. “And it’s shocking cause Mary should be more educated and understand it’s not appropriate to say things like that.”

“That is discrimination,” she added, before saying she hoped to speak with Mary about the situation and make it known “you don’t say things like that.”

Mary, meanwhile, met up with costar Meredith Marks for a bite to eat — where Cosby mocked Jennie’s accent while recounting the drama at the luncheon. Marks winced at the impression, telling her, “No characters, please,” before Cosby apologized.

It all came to a head toward the end of the episode, at a party for Whitney Rose’s beauty brand relaunch, as Jennie pulled all the women aside to explain why Mary’s remarks were offensive. 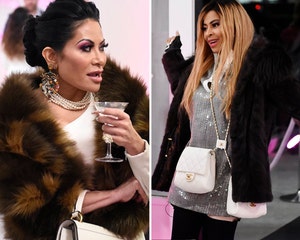 “You made a comment to me and you said, ‘I like your beautiful slanted eyes.’ I don’t know if you recall saying that, but I felt very insulted,” Nguyen told her. Cosby didn’t get it, exclaiming, “Really? I love slanted eyes. I don’t mean any harm by that.”

Jennie was shocked Mary would repeat the comment again and told her, “To me, it’s very discriminatory, racist kind of joke. You’re an adult, take some responsibility. Right now, there’s a lot of Asian hate. Be conscious of your word.”

Mary still didn’t grasp what Jennie was telling her though, instead opening it up to the whole group and asking them whether they felt what she said was offensive. “It’s something I wouldn’t say. I don’t know if it would be offensive or not, I just wouldn’t say it,” responded Marks, which got a lot of side-eye from her costars in their confessionals.

“You can say things differently, like, ‘I love your beautiful eyes.’ But when you reference ‘I love your slanted eyes,’ you know, it’s very insulting to me,” Jennie reiterated, while Mary continued to defend her comments in a confessional. “That’s a feature and that’s a beauty in America,” she said, before adding, “But cultures are different and I respect that.” 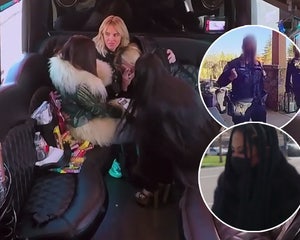 RHOSLC Cast Reacts to Jen Shah's Arrest — And Not Everybody Was Surprised!

She then told Jennie she would “never walk down that road” again and apologized for what she said.

While the conversation took a bit of a detour, Whitney brought it back to Mary’s behavior a few short moments later. “I’m very uncomfortable with saying, like, racially derogatory things, and I feel like everyone’s just kind of letting it go,” she said, before Lisa Barlow brought up Mary comparing Shah to “a thug … like, you know, those Mexican people that make all those drugs.”

Despite video evidence to the contrary, Cosby denied ever saying the “thug” comment … though she has since apologized for it on social media. She then made a bee-line for the exit.

As the episode aired, Marks tried to make it clear she was not trying to make excuses for Cosby, who jumped into her mentions to defend herself.