It would be safe to say Jenny Slate is well-known. A New York Times bestselling children's author, actress with screen and film credits both indie and blockbuster, and a comedian who, since her tenure on Saturday Night Live, has performed widely. In 2019, roughly two weeks after Netflix premiered her hybrid stand-up special meets mini-documentary Stage Fright – her sort-of memoir, Little Weirds, was released. Between the two, it seems if Slate was known, she was asking to be known better. 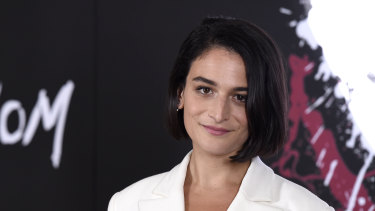 Jenny Slate’s book is a collection of odd and lovely vignettes. Credit:Chris Pizzello

Crafted in the wake of a divorce, the divisive 2016 US Presidential election, and the #MeToo movement, Little Weirds jumps from hallucinatory, wild prose to furious commentary on misogyny, then right back to poetic musings on making a sardine sandwich.

With the psychic pain of heartbreak and the absurdity of the realities of being a modern woman at the heart of both Stage Fright and Little Weirds, Slate agrees her work can be both sad and sweet: ‘‘I tend to often be fascinated by or fixated on the ways in which things can be both mighty and melancholy, ways in which there can be sorrow without pessimism.’’

It’s disappointing to see, when reading about Slate, that it’s more often than it needs to be in the context of her tenure at SNL and what she perceives its creator, Lorne Michaels, may think of her; or, there’s needless speculation about which pieces in Little Weirds may reference famous men she’s been tied to. 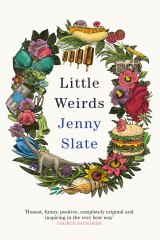 In an interview with USA Today, Slate says: ‘‘I am very tired of my own name being tied to other people, especially men that aren’t making my work.’’

I read Slate an excerpt from her book titled Kathleen Dog Flower Face, a slight story about self-realisation by way of the questions asked of her by a gardener named Kathleen. I tell her that this story, like others in the book, made me cry – the concluding paragraph so poignantly capturing the joy of noticing yourself, of realising that there are things about yourself that you like, especially if you, like Slate, have come through a period of hiding those things, or not being able to find them at all.

‘‘I do think that what’s important to me about this work is that it’s not ornamental. The request to be known, and the actions that I take to show as much of myself as is possible within these genres, it’s just like that Kathleen Dog Flower Face piece. It’s saying, I’m giving you as much as I can so that you don’t make assumptions about me, and therefore you can treat me well.’’

When you watch Slate perform, it’s not hard to see that she grew up idolising comedy legend Gilda Radner. She’s silly and slapstick and sweet, and her character work on television shows such as Parks and Recreation and Kroll Show makes me cackle. But there’s something so infectious about watching her just be her. She’s a beloved late-night talk-show guest, where she’s playing no one but herself. Her storytelling on Drunk History is some of my favourite 15 minutes of TV.

At the tail end of our call, Slate says “there’s nothing worse than looking back at a piece of your own work and realising that you did even part of it to guess at what would please other people …”

Many artists strive to be known. Not famous – but known. They create work that flays them open and they share that gaping with the world. Where Little Weirds is a love letter to the self, and Stage Fright an insight into her private life, Slate is acknowledging that the knowing and the being known is the work itself.

The hardest work is not the book writing or overcoming her literal stage fright, it’s the process of learning about loving oneself – and hoping that leads to a deeper, lovelier life.

She’s working hard, and she’s happy. ‘‘I did all I can do, and I admit that I need [these things], so now I’ll just see what pops up through the soil after I’ve planted everything.’’

Little Weirds is published by Hachette at $32.99.