Jessica Mauboy sits cross-legged on a studio floor in a phone conversation with aunties Nina and Simpi, both retired assistant teachers living on the Tiwi Islands.

Mauboy is rehearsing her pronunciations before recording in the Tiwi language a children's song celebrating Indigenous animals totems — a barramundi, a cockatoo, a wallaby and a cuddly possum — all to the tune of Frere Jacques. 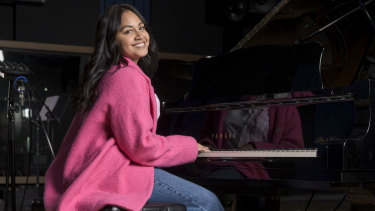 "I don't want the kids laughing at me; it's good to get a proper recording," Mauboy says. "If you don't say it right, you are probably saying something else.

"Heading out to the communities, I notice that if I did say a word wrong they'd giggle, and say, 'No, miss, that's not right'. They are very patient."

That same morning, the Darwin-born singer recorded The Barramundi Song in Mangarryai language, also not her native dialect.

The Indigenous Literacy Foundation has published 101 books in 26 Indigenous languages written by children, families, and community elders from remote Australian communities. This year it is publishing another 20 books, including its first collection from the Torres Strait Islands.

COVID-19 has, however, disrupted the traditional Sydney Opera House launch usually attended by children from remote communities, local schools and supporters. With remote communities closed to visitors and major performances shutdown, the 45-minute national celebration has been prerecorded and will be broadcast on YouTube on September 2. 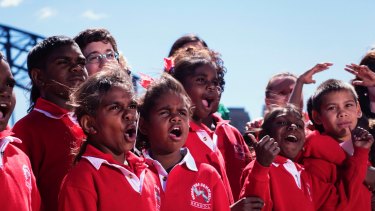 Students from the remote community school of Yakanarra after the performance of the Yakanarra Song Book at the Sydney Opera House in 2017.Credit:Christopher Pearce

A second virtual event will be scheduled later that day for primary school and early learners, at which Mauboy will be heard singing The Barramundi Song in Tiwi, Mangarryai and English.

For Mauboy, an ILF ambassador for five years, this is her first studio outing since COVID-19 turned the world upside down.

"It is a special one and the fact that I get to collaborate with this special team and sing in language — why not?" Mauboy says.

Fans were excited to see Mauboy, who shot to fame on Australian Idol in 2006, when she visited Milikapiti in the Tiwi Islands last year. ILF's executive director Karen Williams says Mauboy "couldn’t walk down the road without a huge fan club or following".

"She has that ability to inspire kids, and we saw that with the group of girls from Tiwi College, who were in Sydney for a week to write and create a book and story," Ms Williams says.

"A week is a long time away from family and friends in a big city like Sydney. It was fun 'springing' Jessica on them.

"The girls were outside writing in their diaries about their week in Sydney. Jess was inspirational — she talked, sang and had photographs with them and the girls did their traditional dances and taught her how. It's small things like this that really helped."

With no audience for the prerecording, Mauboy pictured the shining faces of those children she met that visit during the prerecording that went smoothly in just two takes.

Williams says early literacy is the cornerstone of success in education. Encouraging early literacy required children and their parents to have access to books.

"We understand children need to see themselves in the stories they read and that their culture and language are cherished and their stories are celebrated by all Australians," she said.

Mauboy, who dropped out of Darwin's Sanderson High School in Year 11 to pursue a career in music, said it was important to Indigenous children's identity that they hear their first language in song and in books.

"It's who they are," she says. "To see their language translated into a book with the actions that go with it every day with their mums, dads, their cousins, their teachers at school, in the playground, at home in the backyard, down near the ocean, where they fish . . . it's important to their growth and knowledge."