Australia’s media face laws that threaten journalists who report leaked classified information with jail and a culture of secrecy in the Commonwealth government, a Senate committee examining press freedom has found.

In a report released on Wednesday, the committee’s Labor-Greens majority said the public sector was developing a “culture of secrecy” manifest in freedom of information requests delayed for so long or redacted so heavily they became useless. 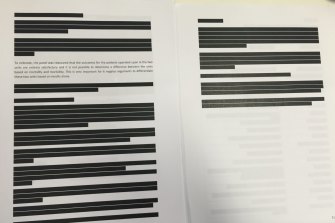 Freedom of information requests are delayed for so long or redacted so heavily they become useless, the Senate committee found.Credit:

It said Australia’s whistleblowing laws weren’t working properly and secrecy laws were so broad they are “susceptible to overuse, misuse or even abuse”.

The committee was established after the Australian Federal Police raided the home of journalist Annika Smethurst — then at News Corp and now state political editor of The Age — and the Australian Broadcasting Corporation offices in Sydney in June 2019.

Neither of those raids resulted in journalists being prosecuted, with the High Court finding the warrant used to search Smethurst’s home was invalid, but the committee heard evidence from journalists and the media union that they were “intimidating” and “chilling” for reporters.

A majority on the committee made 17 recommendations, including fixing gaps in whistleblowing laws, strengthening rules that let journalists protect sources’ identities in court, and forcing the government to show it had actually been harmed by leaks before prosecuting. 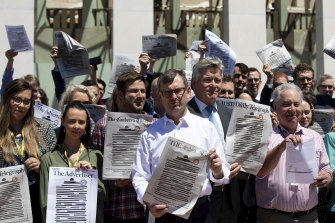 Journalists face a culture of secrecy and laws threatening them with jail if they report leaked information.Credit:Dominic Lorrimer

There have been several reports and reviews since the 2019 raids, including one by the Parliamentary Joint Committee on Intelligence and Security (PJCIS) and another independent review commissioned by the AFP that have led to stricter processes for police investigations that impinge media freedom.

But there has been no change to many of Australia’s secrecy laws, which, for example, presume any information with a security classification is “inherently harmful” regardless of its actual contents. Barrister Bret Walker SC, who was a former overseer of Australia’s national security legislation, told the committee “not all material is classified correctly or understandably or reasonably”.

Government senators on the committee issued a short dissenting report, which said the issue of press freedom and secrecy had been canvassed more comprehensively by the PJCIS. It said some of the Senate committee’s recommendations overlapped with the PJCIS report, were internally inconsistent or had already been acted on.

Overall, the committee chaired by Greens Senator Sarah Hanson-Young said there had to be a balance struck between competing principles.

“While national security and freedom of the press are both fundamental pillars of Australian democracy, neither is absolute,” it said.

The problem, it added, was things had tilted so far in favour of national security that the law criminalises the disclosure of information that might merely embarrass the government.

It emphasised the media had a long history of reporting responsibly on national security matters, including checking to see whether stories might put an intelligence investigation at risk.

“The committee accepts that journalists and media organisations have over a long period acted in a manner that has not prejudiced national security,” it said.

As well as its policy recommendations, the committee said the Director of Public Prosecutions should urgently reconsider pursuing the retired army major David McBride, whose alleged leak of information suggesting war crimes by Australian forces in Afghanistan triggered the ABC raid.

The Greens issued their own additional recommendations, arguing there should be a dedicated Media Freedom Bill to exclude public interest journalism from criminal offences, and suggesting the media should be allowed to have their own representatives challenge covert warrants.

“The freedom of the press is fundamental to our democracy and human rights across the globe,” Senator Hanson-Young said. “The parliament has a duty to protect it and this inquiry has allowed us to lay a path for doing just that.”