Three years after the death of her previous owner, the late designer Karl Lagerfeld, celebrity feline Choupette is still enjoying a life of luxury,

The Birman cat just celebrated her 11th birthday and was snapped onboard a private plane, surrounded by her many gifts, a cat-friendly cake and a bottle of champagne.

After Lagerfeld died on 19 February 2019 at the Hopital Americain in Paris, his beloved pet was trusted to his former governess, Françoise Caçote, who has since kept her Instagram account alive.

At the time of the designer’s passing, it was believed Choupette and her new carer stood to inherit a chunk of his £178m fortune, but the amount she and Françoise eventually received was not disclosed. 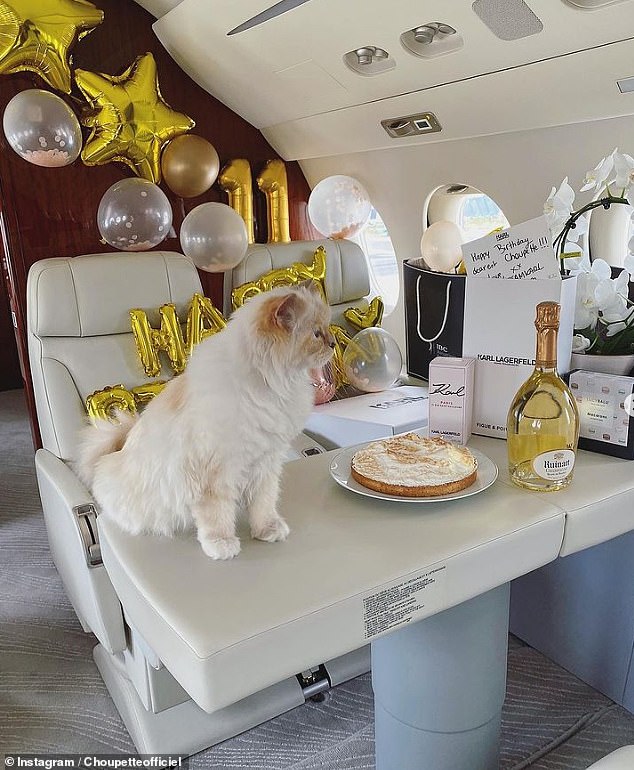 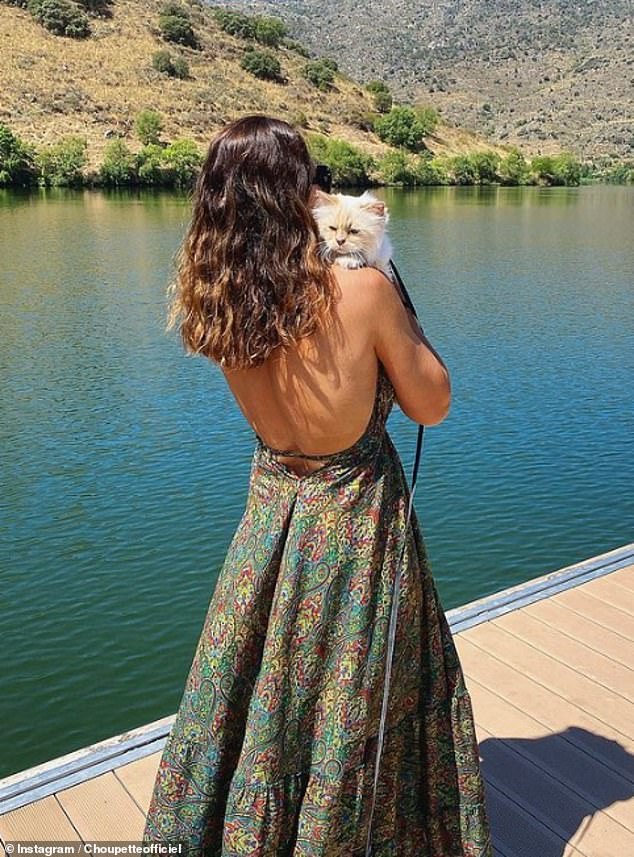 The late designer’s beloved pet was trusted to his former governess, Françoise Caçote, who took her to Portugal earlier this month

Fans can be reassured: snaps showed the feline wants for nothing and actually is living the high life.

For her birthday, she was treated to champagne, flowers, balloons and gifts included a Karl Lagerfeld cologne and a cat-friendly cake.

Her private jet was decked out with an arch of golden balloons shaped like stars, and read ‘happy birthday.’

Several boxes and bags stamped with the name Karl Lagerfeld, likely to have been gifted by the fashion house that survived its founder, could be see on the table. 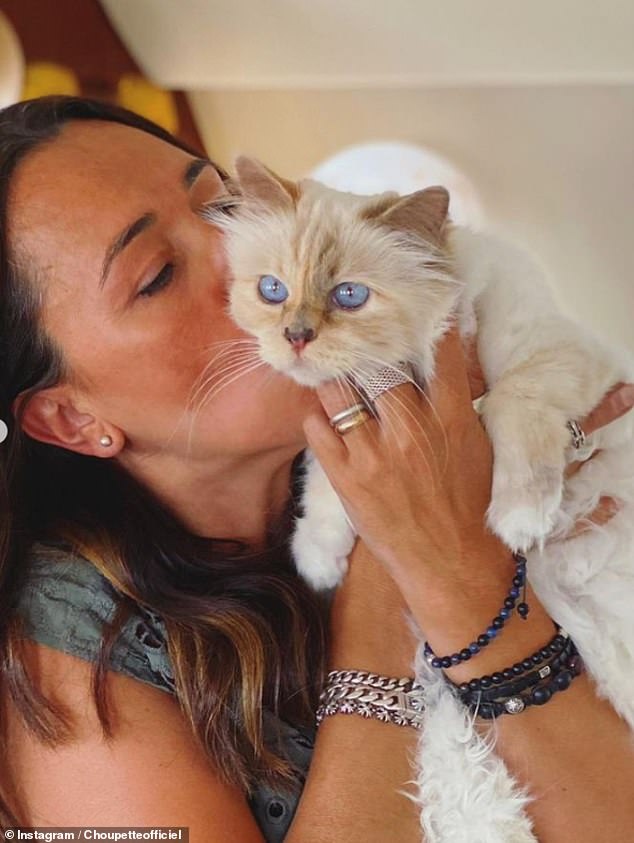 The feline got plenty of hugs for her birthday yesterday, and was photographed in a grounded private jet, ‘in memory of the many trips with [her] daddy

Meanwhile, the cat of the hour could be seen looking out the window, clearly soaking in the attention.

Happy birthday to me. Thanks to My Pet agency for organizing this little party,’ the post read.

While the picture was taken on the private plane, the post specified it stayed grounded at Le Bourget, an airport located north of Paris ‘in memory of the many trips with my daddy.’

The post went on to thank the Karl Lagerfeld brand and the cat accessory brand Lucy Balu for the gifts. 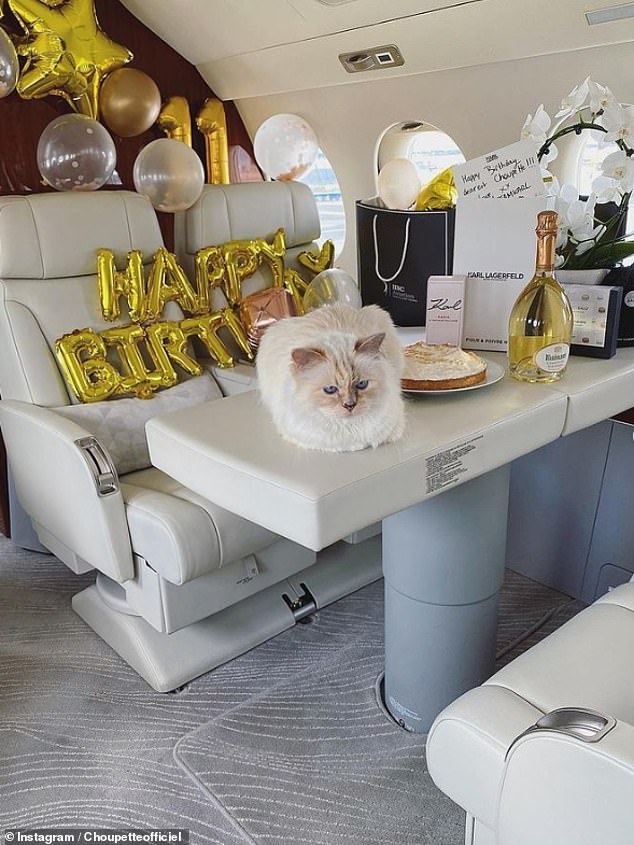 Choupette looked unbothered as she posed with the many gifts, flowers and balloons her admirers sent her 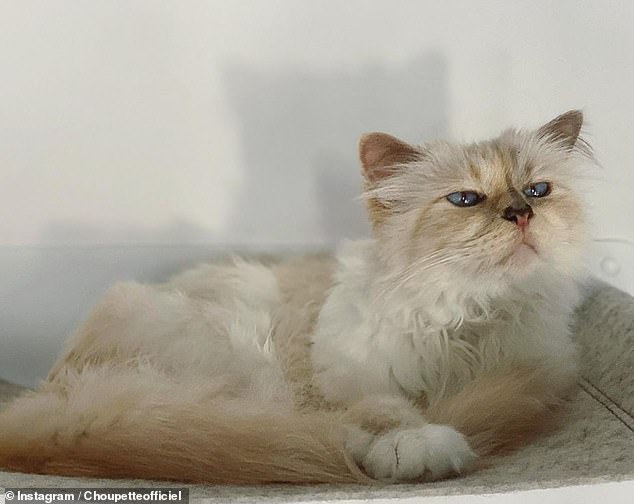 The Birman cat, who lives a life of luxury, lounging around during a Portugal holiday this summer

One of the first persons to like the post and leave a comment was Choupette’s first owner and Lagerfeld’s former collaborator, Baptiste Giabiconi, who wished her a happy birthday.

Choupette began August with a holiday in Portugal, with her new owner sharing breath-taking snaps of the feline in her arms, posing on the sun-soaked banks of the Cõa river.

Her Instagram account is filled with throwbacks pictures of Choupette, many which were taken by Lagerfeld when he was still alive. 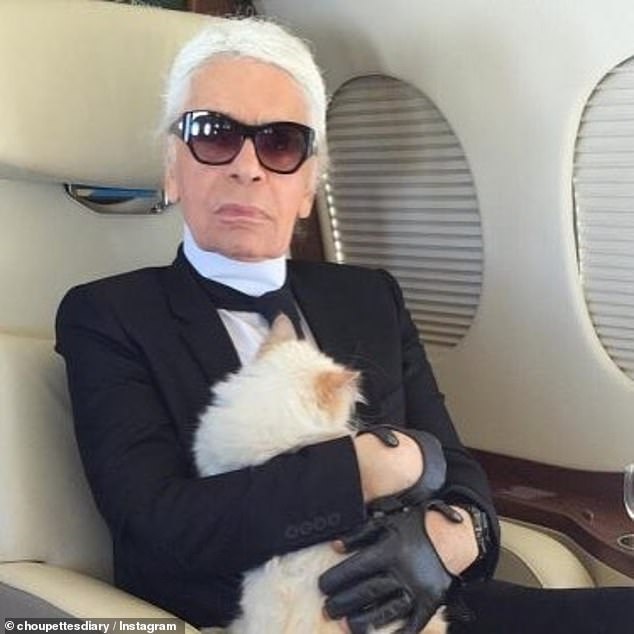 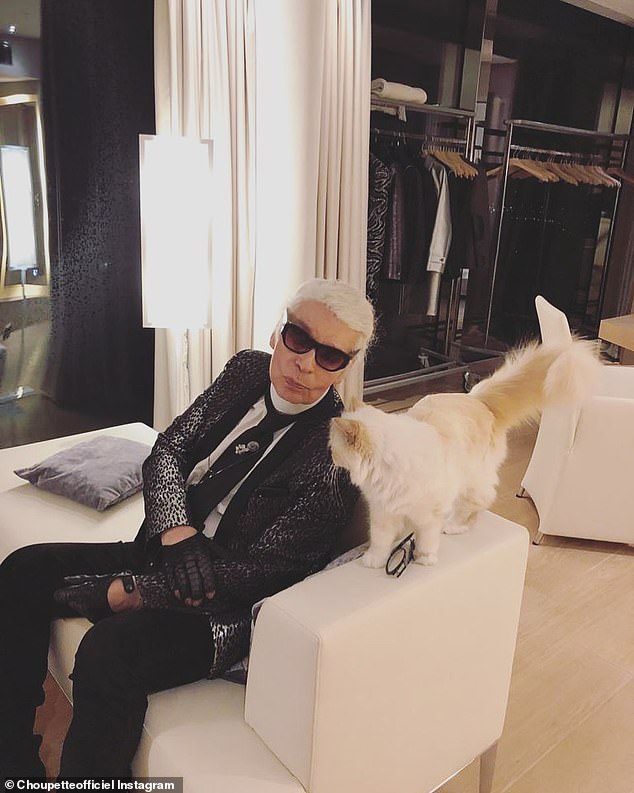 The late iconic fashion designer and Choupette together. He fell in love with her the moment he met her

When she is not lounging around or holidaying, the feline has a very busy schedule.

In 2020, Caroline Lebar, head of communications for the Karl Lagerfeld brand in Paris, told The Times that Choupette, who is believed to be one of the world’s richest cats, has her own agent.

‘She has an agent because she has a lot of requests. So far she hasn’t done anything because they are ultra-selective,’ she said.

The feline was Lagerfeld’s great love, flying with him on private jets, adorned in diamond necklaces and raking in millions as a ‘model’.

Originally belonging to French model Baptiste Giabiconi, Lagerfeld ‘met’ Choupette while house sitting for him in 2011. 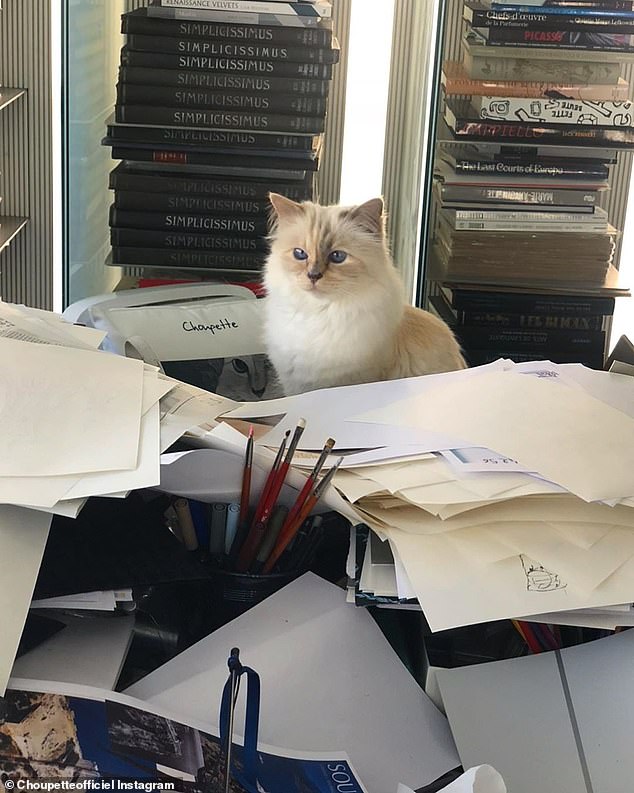 Nowadays, Choupette’s Instagram is full of throwback pictures, like this one, which  shows the feline sitting among her late owner’s papers 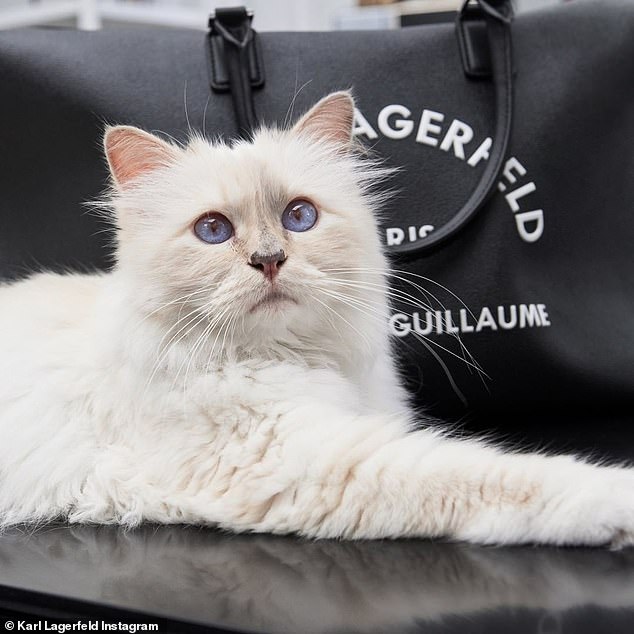 Three years after the death of her owner, Choupette is still on high demand and has an agent ‘because she has a lot of requests’ 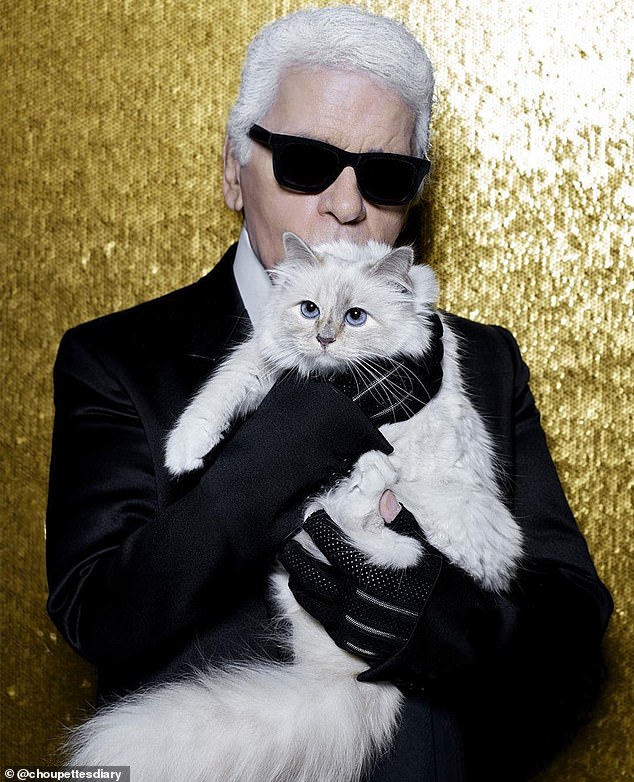 The stunning cat, which has a silky white coat and deep blue eyes, has nearly 114,000 Instagram followers. Pictured with Lagerfeld before his death 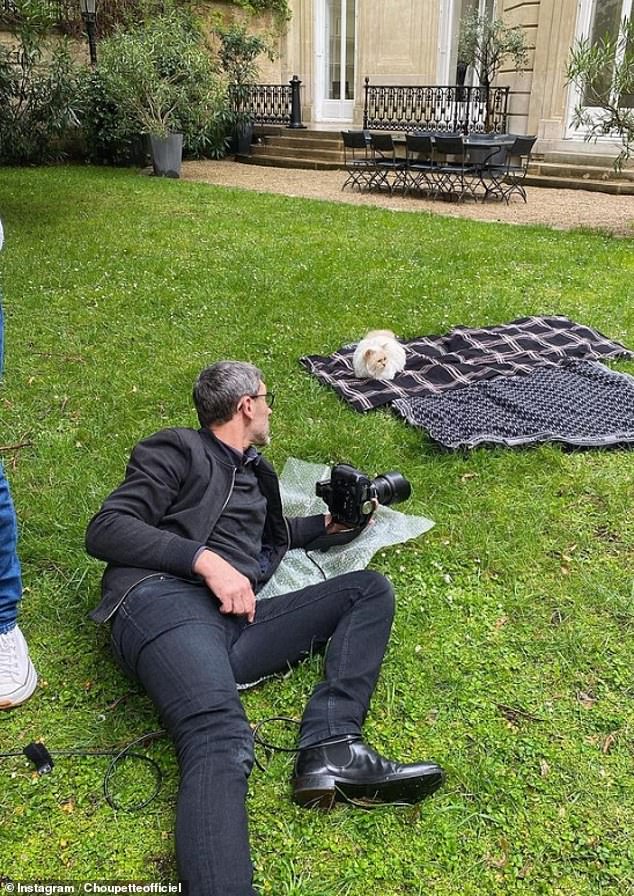 Since the death of Karl Lagerfeld, Choupette’s career has been moving on and she’s worked on several photoshoots

After two weeks, Lagerfeld simply told Giabiconi: ‘I’m sorry but Choupette is mine,’ and would later joke that he abducted her before turning her into an international model.

From the moment the creative director was gifted Choupette, her life was changed forever.

Choupette began her modelling career in August 2012, posing in the arms of French supermodel Laetitia Casta by the Eiffel Tower.

The cat has since been used in numerous advertising campaigns, including for Opel cars and various make-up ranges.

A whole collection titled ‘Choupette in Love’ was launched in honour of the feline and a Chanel range was inspired by the cat’s eyes.

The stunning cat, which has a silky white coat and deep blue eyes, has nearly 128,000 Instagram followers.