‘They’re trying a bit too hard’: Body language expert reveals how Kate and Meghan used tricks favoured by politicians to show festive unity… but William and Harry’s lack of eye contact could tell the real story

Kate and Meghan worked hard to put on a convincing display of friendship on Christmas Day – by using tactics favoured by the world’s leading politicians.

After rumours of sangfroid have swirled around the two duchesses, the Christmas Day walk to church provided the perfect opportunity for them to put on a display of festive unity – and they didn’t disappoint, according to a leading body language expert.

The Duchess of Cambridge, 36, and the Duchess of Sussex, 37, appeared tactile, laughing and joking as they walked side-by-side with their husbands…but was it merely an award-winning performance?

Performance? The Duchess of Cambridge and the Duchess of Sussex appeared to put on a unified display after weeks of swirling rumours about their frosty friendship…and body language expert Judi James says the sisters-in-law used tactics employed by politicians to show their festive unity 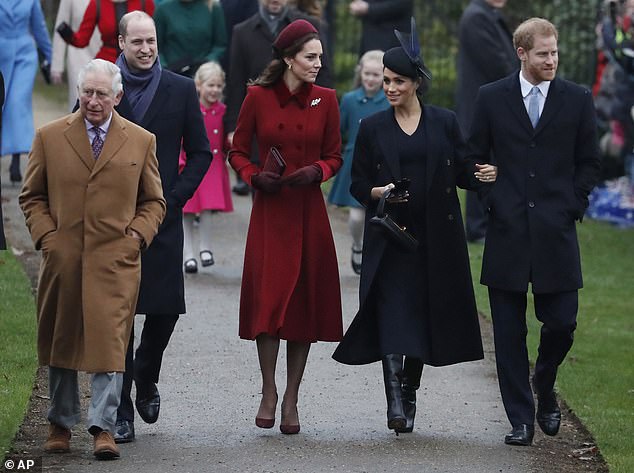 In step: Kate, 36, and Meghan, 37, mirrored each other as they took the short walk from Sandringham House on the Royal Family’s Norfolk estate yesterday. Royal fans should worry more about how the two princes reacted, says James, saying the usual brotherly glances were absent and they appeared to wear fixed grins throughout 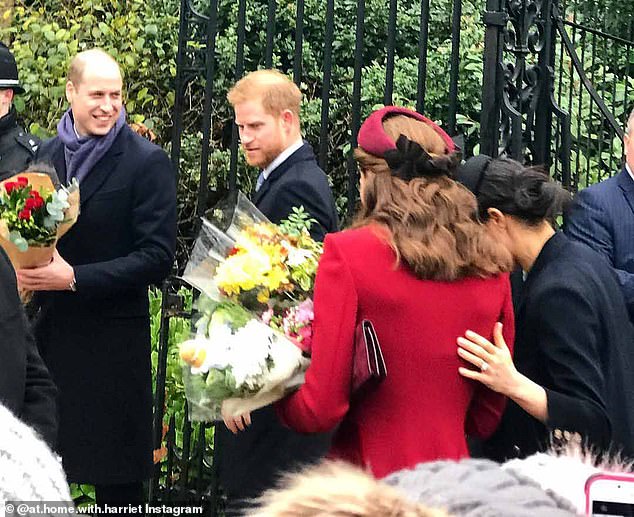 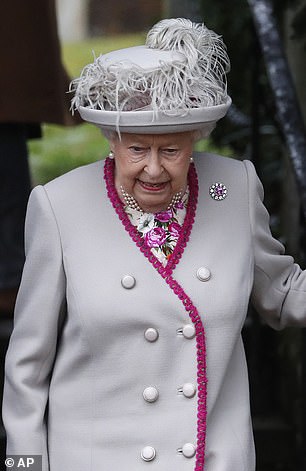 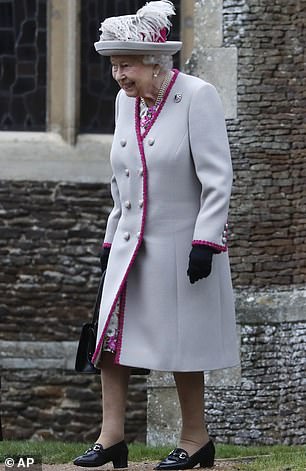 Word from the Queen: The monarch ordered the two couples to show a united front on Christmas Day, according to reports 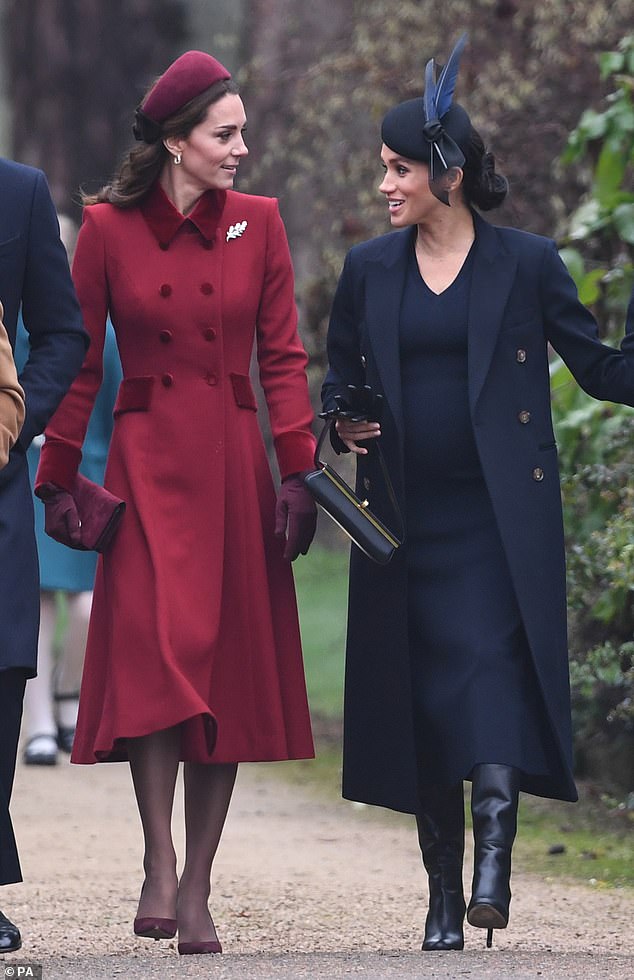 In 2017, Kate held on to William’s hand but this year chose to walk apart from her husband and close to her sister-in-law as they worked hard to show they’re friendship isn’t cooling

According to expert Judi James, regardless of how the pair actually get on behind royal doors, there was clearly a concerted effort to show a yuletide united front – and it is actually William and Harry’s apparent lack of ease that we should be more concerned about.

Of Kate and Meghan, James says: ‘It reminds me of political body language. The kind of thing politicians do when they’re walking with other heads of state and want to show some signs of rapport or unity.’

The Queen and Prince Charles allegedly made it clear that any rift between the two duchesses must be kept out of the public eye as they arrived together at the St Mary Magdalene Church.

‘They’re walking in step, and there’s enough mirroring to suggest like mindedness too. Kate has her left hand raised at the same time as Meghan – they’re both gesticulating in an over-congruent way to show they’re having a conversation.

‘It looks performed, they’re possibly trying a bit too hard.’ 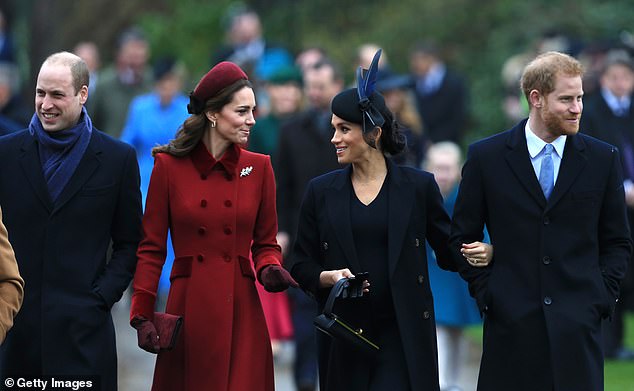 Is Kate emerging as the key female figure in the royal family? While Meghan holds onto Prince Harry, the Duchess of Cambridge walks away from Prince William as she concentrates on showing the world she’s at ease with Meghan

AN OSCAR-WINNING PERFORMANCE! BODY LANGUAGE EXPERT JUDI JAMES ON THE TRICKS USED BY KATE AND MEGHAN TO SHOW UNITY ON CHRISTMAS DAY

EXAGGERATED GESTICULATION:  ‘They’re both gesticulating in an over-congruent way to show they’re having a conversation. They’re trying a bit too hard. It’s definitely a performance’

MIRRORING EACH OTHER: ‘They’re walking in step, and there’s enough mirroring to suggest like mindedness too. Kate has her left hand raised at the same time as Meghan – they’re both gesticulating in an over-congruent way to show they’re having a conversation.’ 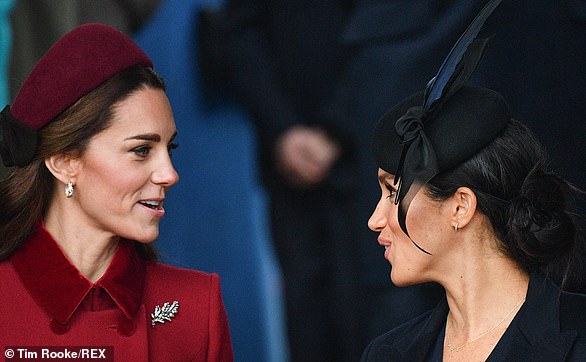 Meghan and Kate chatted amicably in front of the cameras, often mirroring each other’s smiles and gesticulation

PATS OF APPROVAL: ‘Meghan patting Kate’s back is power patting. It’s not unpleasant and it can be affectionate but ultimately you’re the one giving approval to the other person.’

SHOULD WE BE MORE WORRIED ABOUT HARRY AND WILLIAM’S BODY LANGUAGE? 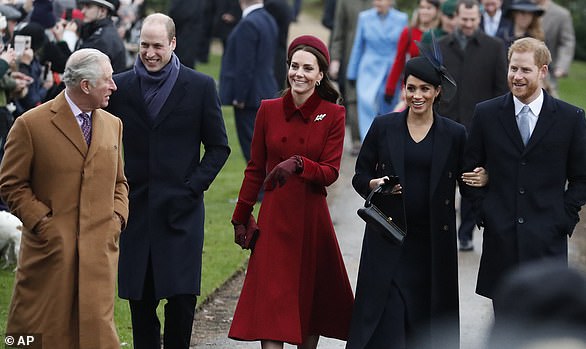 Prince William, 36, and Harry, 34, kept their hands rooted firmly in their pockets as they walked the path, separated by their wives, and didn’t appear to look at each other as they walked

‘We’ve been so entranced by the two women that we’ve forgotten about Prince William and Prince Harry. Apart from having very rigid, fixed smiles on their faces, I didn’t see anything in the way of glances or exchanges between them.

‘They’ve always been seen laughing and sharing jokes, they usually have lots of ‘tie-signs’ (gestures that signal closeness) between them. They’ve both got their hands stuck in their pockets and I didn’t see any connection signals between them at all.’

Despite the sisters-in-law appearing to grin throughout the short walk to the festive service, Kate wore a ‘suppressed’ smile, says James.

‘Kate’s mouth is in quite a suppressed position. Normally, Kate wears a classic perfect smile. Here, she looks slightly amused by what’s happening. It looks like they’re almost sharing a joke that they’ve got to perform this friendship routine.’

Royal fans should worry more about how the two princes reacted, saying the ‘tie-signs’ including brotherly glances were absent and they appeared to wear fixed grins throughout, a world away from their usual relaxed demeanour.

James says: ‘Kate is becoming a lot stronger in the royal family as the Queen gets older.

‘She’s showing a degree of dominance by moving away from William in these images – last year she held his hand. This year, she’s created a space between herself and her husband so she can get closer to Meghan. She’s taken the diplomatic role here.

‘By contrast, Meghan is very much holding on to Prince Harry’s arm.’ 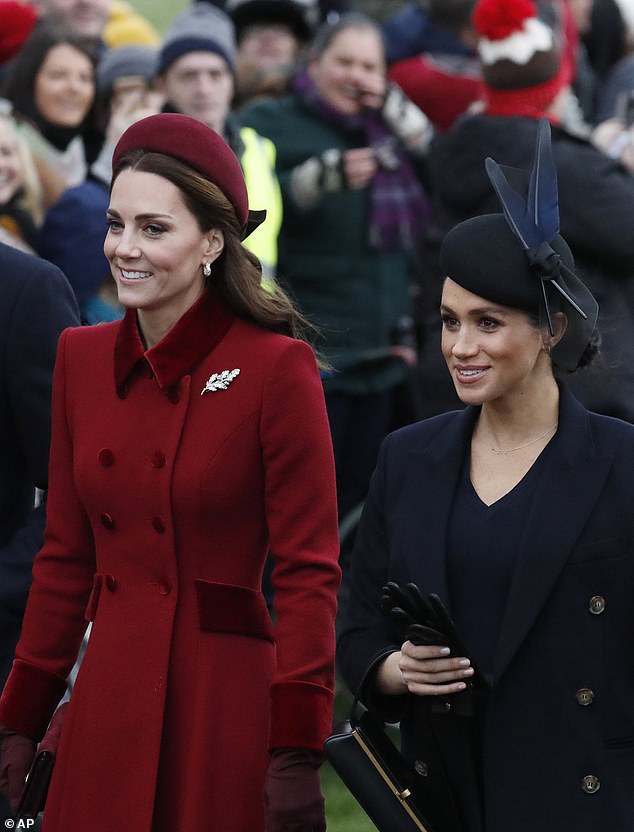 Sisters united: Kate and Meghan both appeared happy and relaxed as they walked to the church  yesterday. Kate wore a bright red coat, alongside Meghan, who chose a black outfit 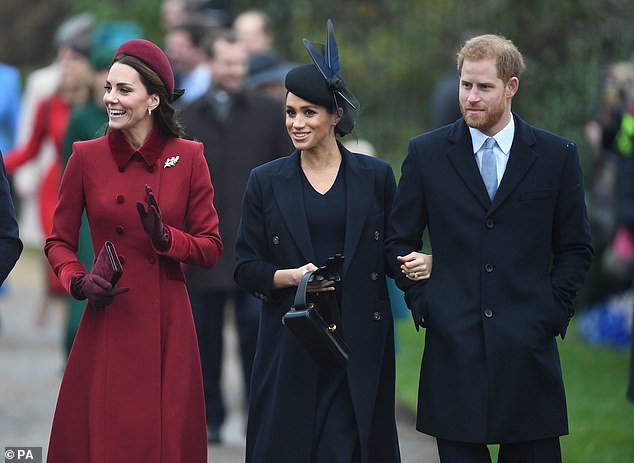 Meghan held her gloves in her hand and smiled as she linked arms with Prince Harry. Kate waved at wellwishers who had come out to see them on Christmas morning

The Queen allegedly told Kate and pregnant Meghan to put their differences aside by the time they sat down to watch her speech along with the rest of the nation at 3pm on BBC.

It comes as there have been rumours swirling for months of a rift between Meghan and other royals.

speculation surrounding the feud surfaced when the Duke and Duchess of Sussex announced they were moving out of Kensington Palace to live in Frogmore House in Windsor.

There were also reports of a falling out between Meghan and Kate during ­Princess Charlotte’s bridesmaid dress fitting before the royal wedding earlier this year.

It was also claimed that Prince William told the Queen that he did not think Meghan was a suitable wife for his brother.

The reports come after it was suggested that the Queen was eager to offer her support to pregnant Meghan to heal the rift with Kate.

A source told The Sunday Times that courtiers were eager to urge Meghan to seek advice from the monarch.

‘Her Majesty has seen it all and could offer the duchess some helpful advice at the moment,’ an insider said.

‘Meghan would do well to nurture that relationship and pop over for the occasional cup of tea with the Queen. That is what Sophie Wessex has quietly done so well.’

It was hinted earlier this month that the Cambridge’s would spend the day with the Middleton family in Berkshire, and Harry and Meghan would spend it with the Queen.

However Kensington Palace later confirmed they would be celebrating the day together in what was a show of solidarity between the royals.

The Royals’ were led by Prince Charles to the church at the Norfolk estate, following by his sons and their wives and the rest of the family. 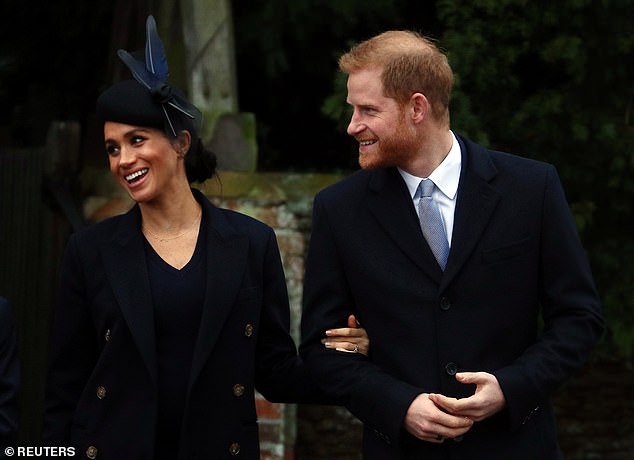 Tension? Prince Harry smiles but fiddles with his wedding ring as he leaves with Meghan following the traditional Christmas service 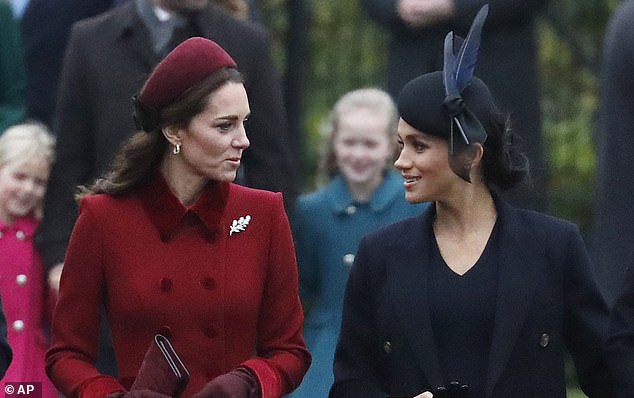 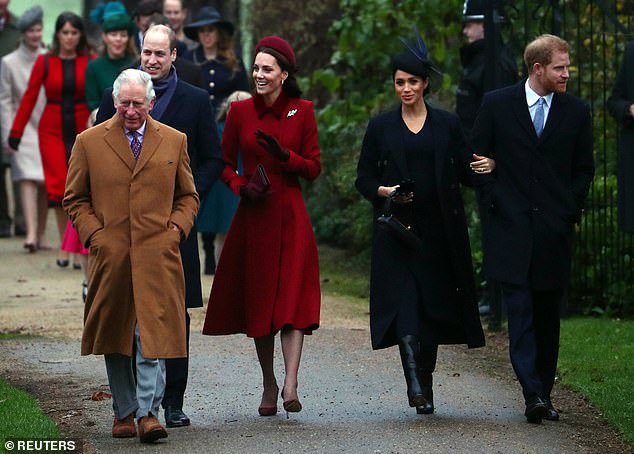 Meghan and Kate were given armfuls of bouquets by well-wishers as they went on a brief walkabout after the service with their husbands.

Kate chatted to Jill Lee, from Cambridge, who has watched the royals attend church on Christmas Day a number of times.

She said: ‘I said to Kate ‘were the children up early’ and she said ‘very early, but it was lovely to see their faces’.’

The 71-year-old, a retired seamstress, kissed Harry on the cheek a few years ago when he left church but this year he declined the offer – because of Meghan.

After the morning service at the Church of St Mary Magdalene on the royal estate is a traditional event where they greet well-wishers.

Back at the house, lunch is prepared by their staff and served at 1pm, and the royals indulge in a giant turkey, reared at Sandringham.

The Queen sometimes quietly leaves the room and lets her family watch the national address by themselves, as she views it alone to see how it comes across.

Boxing Day, when the royals enjoy a breakfast buffet of kedgeree, bacon and eggs, often involves outdoor pursuits such as shooting, riding and walking.

Kensington Palace have not commented on the Christmas Day truce.