Kate steals Meghan’s style! Duchess of Cambridge wears suit trousers in public for the FIRST time – just like the wide-legged ones loved by her sister-in-law

They’re said to be at loggerheads behind the scenes, but it looks as if her sister-in-law Meghan’s style influence is rubbing off on the Duchess of Cambridge.

While the Duchess of Cambridge has previously worn dark skinny jeans and jeggings on royal engagements, this is believed to be the first time she’s ever donned black suit trousers during an official royal engagement.

Meanwhile, her sister-in-law Meghan, 37, has made the style a staple of her royal wardrobe, regularly wearing trouser suits on official engagements.

And the wide-legged style is her particular favourite, worn on multiple occasions since she took up royal duties a year ago. 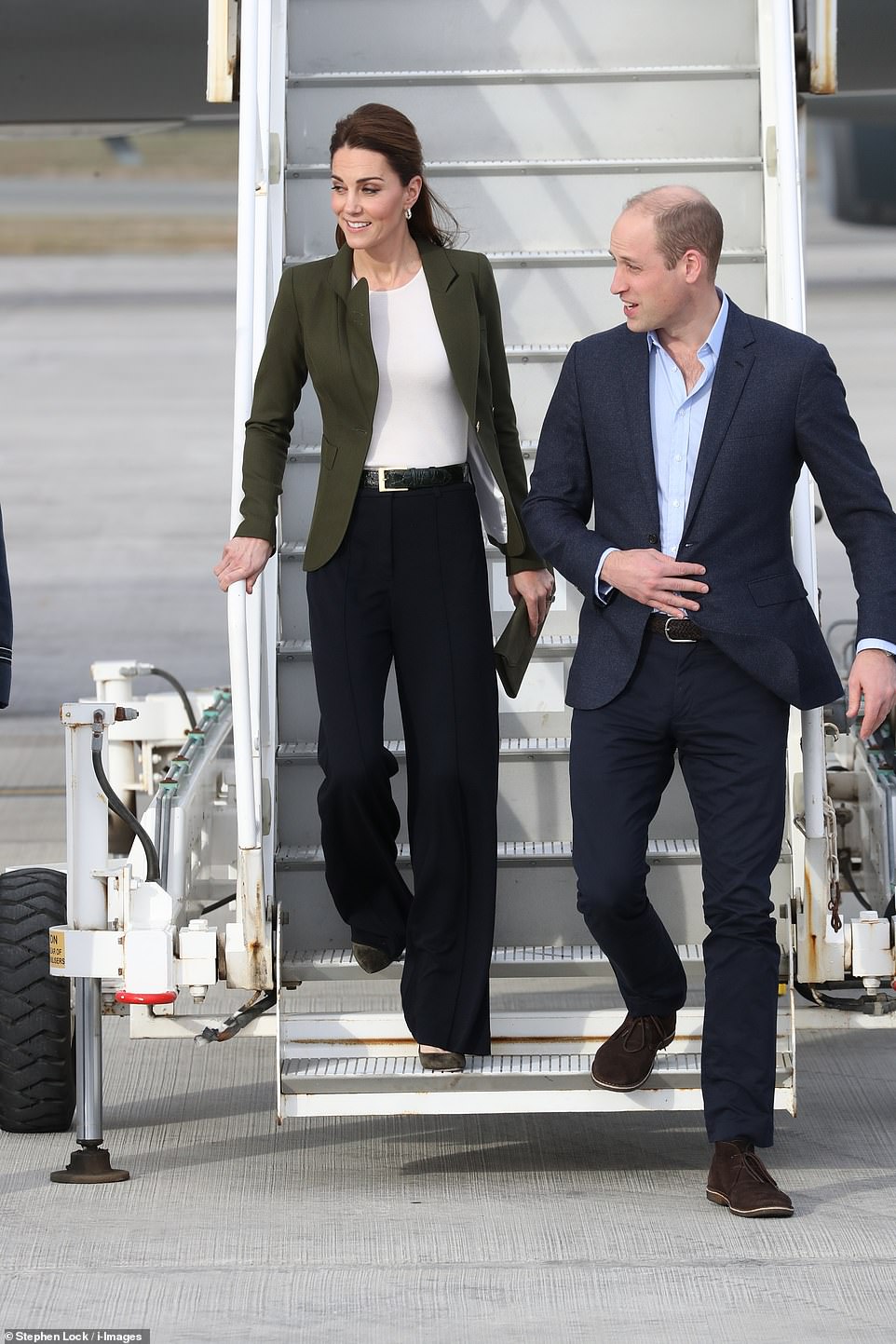 Taking style notes from Meghan? The Duchess of Cambridge seemed to be channeling her sister-in-law’s style today as she arrived in Cyprus wearing black wide-legged trousers

Meghan, 37, has made the trousers suit a staple of her royal wardrobe, breaking with royal tradition for neat shift dresses: Pictured: Attending the WellChild Awards in London in September

The Duchess of Sussex wearing black wide-legged trousers during a visit to POP Brixton in January 2018 (left). Right: Meghan wearing a similar style on her first official visit to Edinburgh in February 2018

Indeed, smart trousers have become something of a trademark for Meghan with the Duchess opting for a suit on evening occasions when other royals would have turned up in a dress.

However, it wasn’t a complete departure from her usual fashion for Kate today as she once again showed her thrifty side by recycling an old blazer.

Canadian brand Smythe is also popular with Meghan, although Kate has been wearing the label since long before her sister-in-law came on the scene.

The Duchess of Cambridge is no stranger to wearing jeans on royal engagements and wore a skinny pair from Zara for her return to royal duties in October after the birth of her third child Prince Louis (left). She also donned blue skinny jeans for the torch relay at London’s Olympic park in 2012 (right)

The Duchess donned her trusty khaki jacket with gold buttons by Smythe, which she previously wore on the royal tour of Canada in 2016.

She looked perfectly co-ordinated, matching her khaki suede clutch bag and heels to her blazer as they touched down at RAF Akrotiri on the government’s Voyager aircraft, which is used by the Royal Family and ministers, after making the five-hour flight from the UK.

The Duke and Duchess of Cambridge are in Cyprus for a whirlwind visit to bring festive cheer to RAF personnel who will be away from their families this Christmas.

‘Your work is done without fanfare’: Prince William thanks British troops for sacrifices they make over Christmas as he and Kate visit RAF base in Cyprus to deliver presents given to them by their families

During today’s visit, William gave a speech thanking RAF personnel who will be away from their families this Christmas, saying their work is done ‘without fanfare’.

William said: ‘All of this work is done without fanfare. You don’t seek praise for your contribution. It’s not about credit or recognition – for you, it’s just about service. But as we approach Christmas, Catherine and I feel strongly that praise for your work and recognition of your sacrifices is exactly what is due to you all.

‘From my time in uniform, we both know a bit of what it feels like to balance your work commitments with your family life. You all put duty first. And so do your families, some of whom we had the chance to meet yesterday at a party at Kensington Palace. 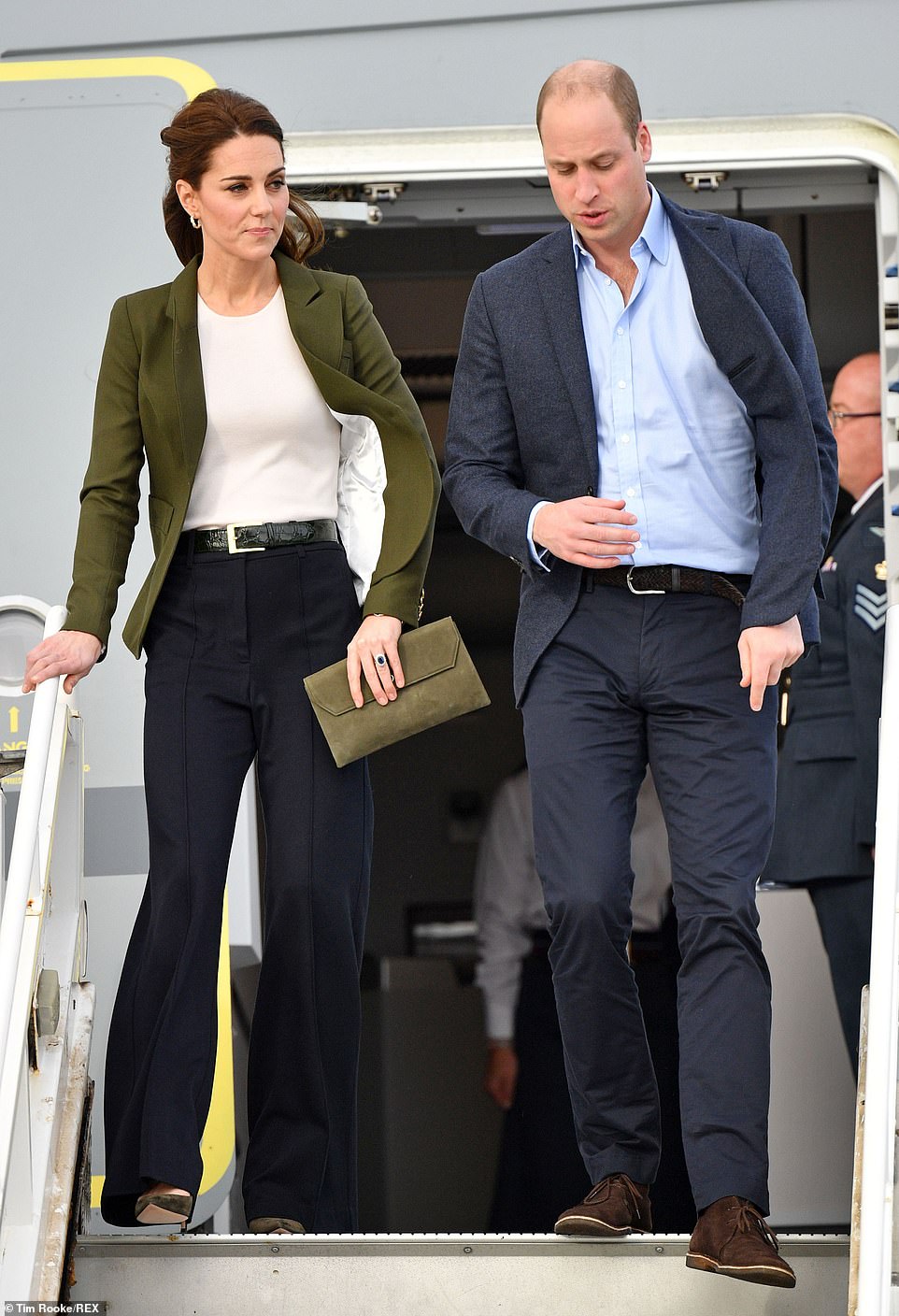 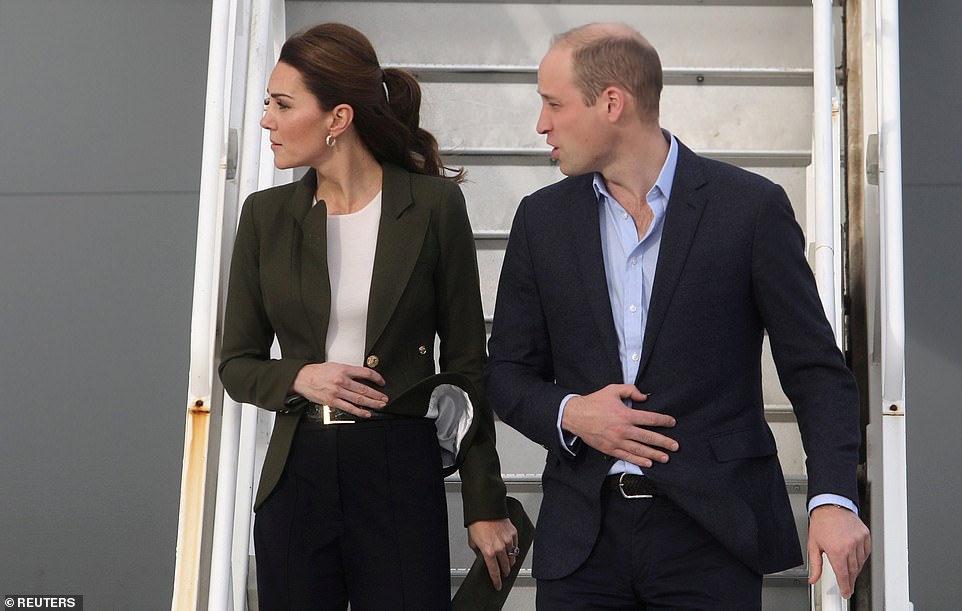 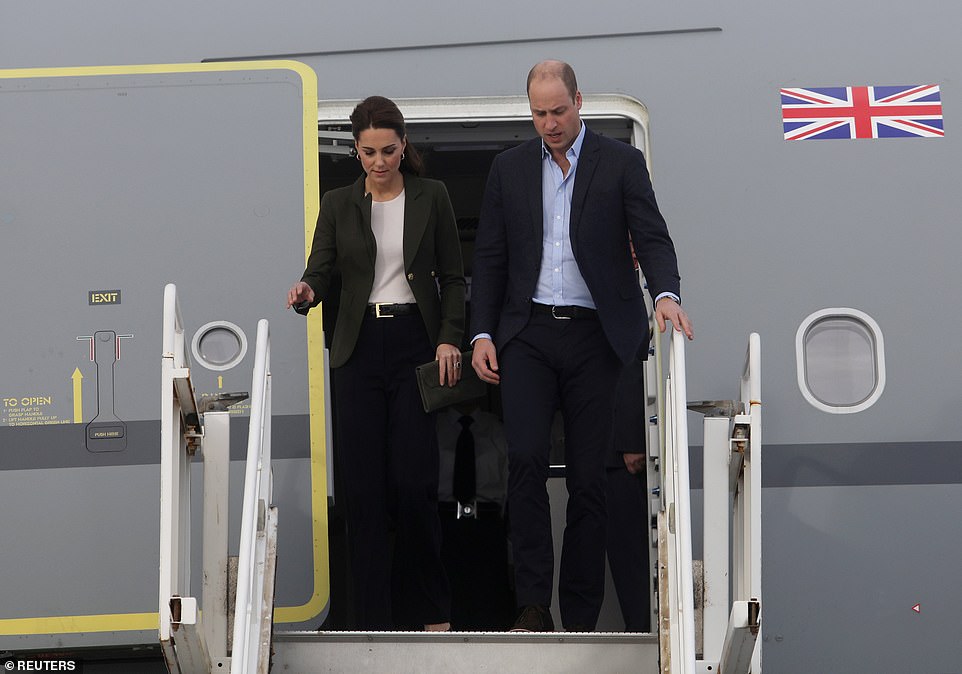 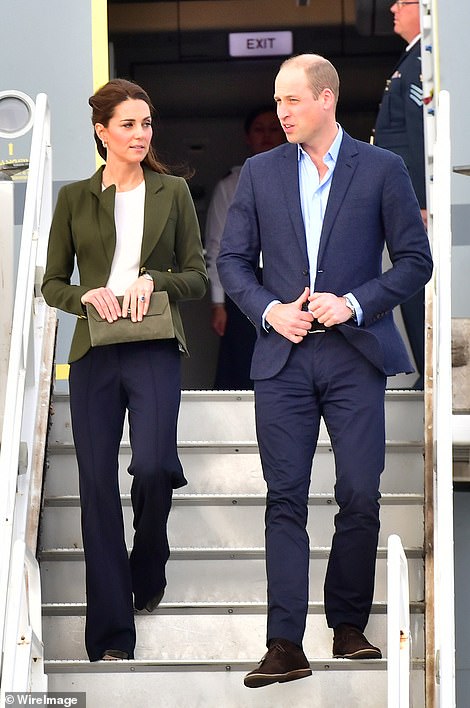 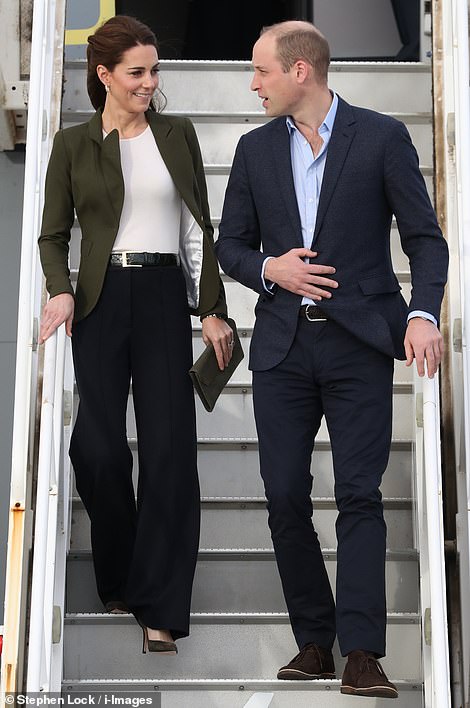 ‘We know this isn’t easy for you or for your wives, husbands, children, and friends back in the UK. On behalf of everyone back home, we would like to say thank you.

The couple’s special ‘Royal Mail’ flight was loaded with gifts and cards for staff from their families.

Many had been given to them yesterday at a party they threw at Kensington Palace for the wives, husbands, children and parents of men and women from RAF Coningsby and RAF Marham, who will be spending Christmas away from home. 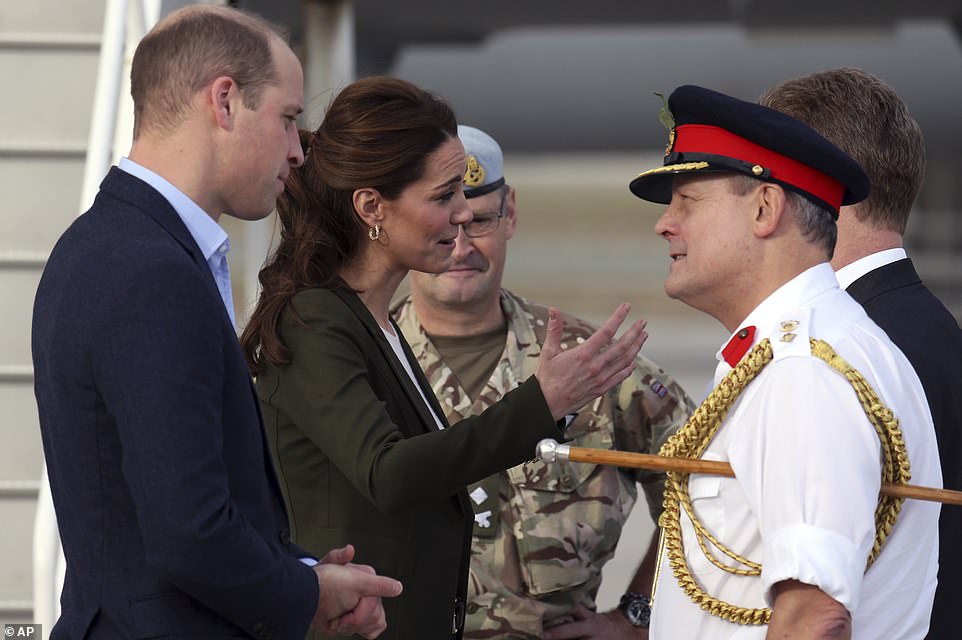 Kate and William speak with Army officials today at the Akrotiri Royal Air Force base, near the south coastal city of Limassol 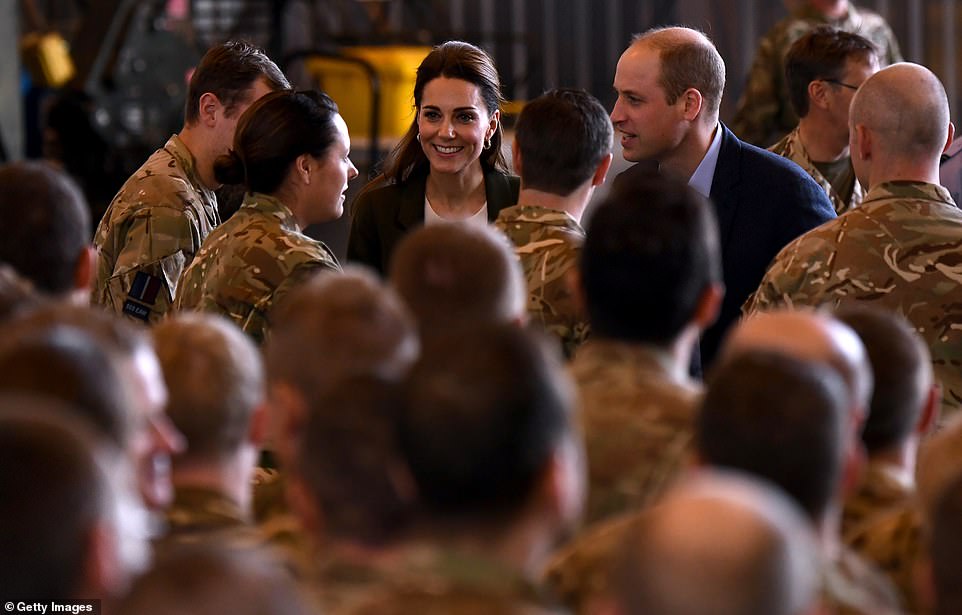 ‘A very merry Christmas to you all,’ said William, ‘although it feels too early to say it…but we are not going to see you’