“Who do you think cried more today?” the Keeping Up With the Kardashians alum, 40, wrote on her Instagram Story. “My baby broke his arm in a few places today. I’m not OK. Poor baby.” 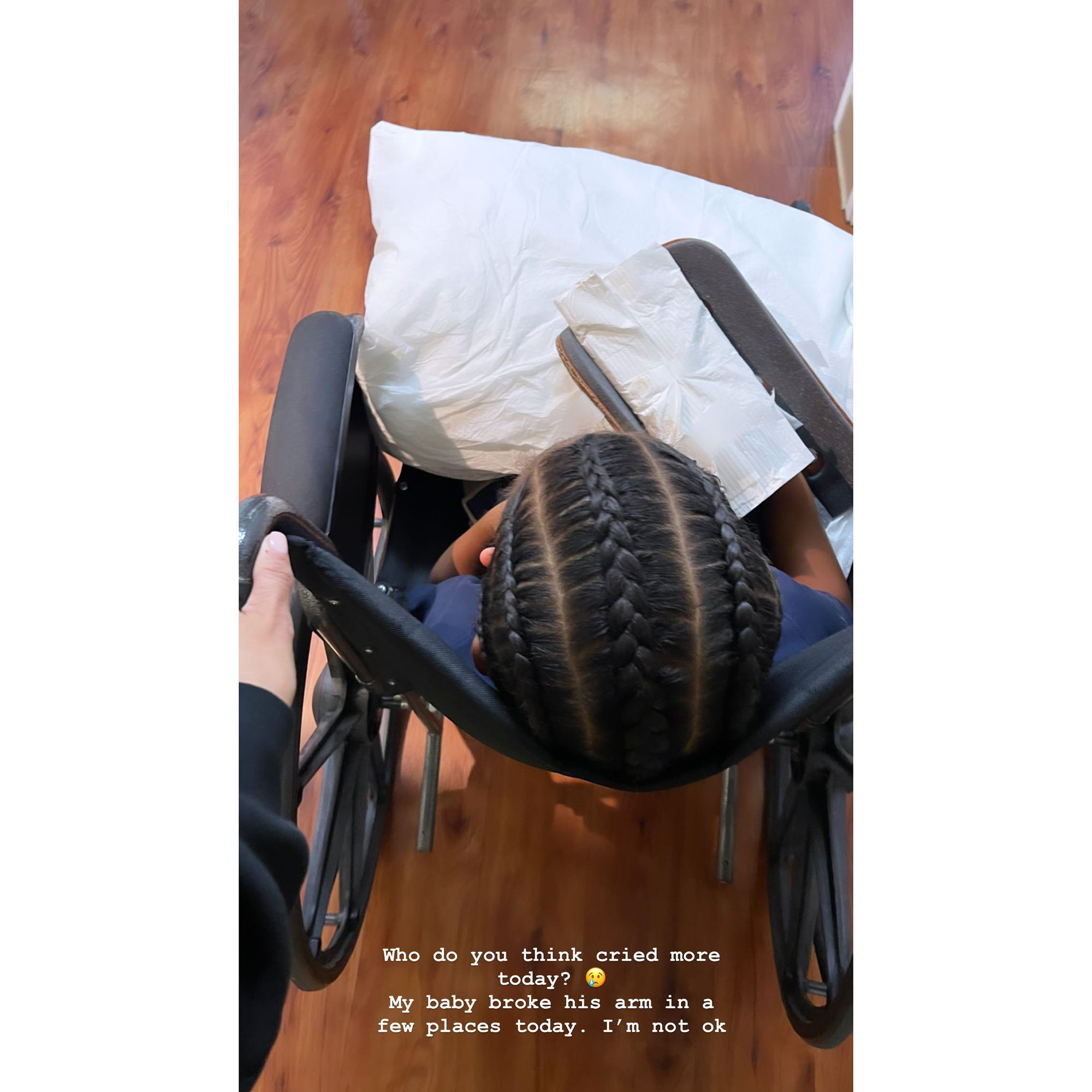 The former E! personality posted a photo of herself pushing Saint in a wheelchair, followed by a picture of the little one’s arm in a cast.

The reality star shares her son, as well as North, 8, Chicago, 3, and Psalm, 2, with her estranged husband, Kanye West. The pair wed in May 2014, and the Los Angeles native filed for divorce from the rapper, 44, nearly seven years later.

The Grammy winner is now hoping to rekindle his relationship with the makeup mogul, a source exclusively told Us Weekly earlier this month. “Kanye wants to get back with Kim,” the insider said. “He sees the two of them together and wants to make that a reality now. He has been trying to get back in her good graces again and it seems to be working. The kids are also a huge factor. Kim would love to bring their family back together.”

The source added at the time: “These past few months have made Kim’s decision to end the marriage even more difficult because Kanye has been very present in the relationship.”

The KKW Beauty creator has showed support for West amid the August release of his latest album, Donda, even making a surprise appearance at his listening party last month in a Balenciaga Couture wedding gown. The estranged couple recreated their Italy ceremony onstage, leaving the stage hand in hand.

As fans unpacked the lyrics in the Georgia native’s new songs, many noticed that West alluded to being unfaithful to Kardashian after they welcomed their eldest two children.

“Here I go actin’ too rich / Here I go with a new chick / And I know what the truth is / Still playin’ after two kids / It’s a lot to digest when your life always movin’,” the songwriter sings in “Hurricane.”

Everything the Kardashian-Jenner Sisters Have Said About Coparenting

The Skims creator wasn’t “blindsided” by the lyrics, a source exclusively told Us. “She wouldn’t be promoting something unless she knew all the lyrics. … She’s known her whole marriage/life with Kanye that he’s an open book and there’s nothing she could ever do to stop him from saying whatever he wants. But she had a heads-up.”

Another source told Us that the Kardashian family members were “surprised” by the revealing track, saying, “He clearly was divulging private family matters between him and Kim and alluding to cheating.”