Kim Kardashian is weighing in on the college admissions scandal.

As a millionaire, the celebrity has a lot of influence in different realms of the world, including the educational realm. However, that doesn’t mean Kim believes in abusing her privilege. In a new interview with CNN’s Van Jones, the mother-of-three is revealing that she could never see herself using her wealth or position to attain admission for her kids, as Lori Loughlin and Felicity Huffman are accused of doing. “If they couldn’t get into a school, I would never want to use privilege to try to force them into a situation that they wouldn’t thrive in anyway,” she explains to Van. “That’s what I see is not appropriate.”

Moreover, the star says she wants her three kids — soon to be four — to “be kind” and that using their position in the world to gain access does not set a good example. She reasons, “I want my kids to be as grounded as possible. To buy your way into something just wouldn’t benefit anybody.”

The 38-year-old hopes that she is setting a good example for Kardashian-West kids by becoming a lawyer, despite the fact that she did not receive a bachelors degree. Her goal to become a lawyer has resulted in her sometimes leaving her kids to go into an office “a few days a week” and “studying all the time.” While this has been a small sacrifice for the tight-knit family, she hopes that Chicago, Saint and North West will “get inspired that they can put in the hard work.”

Kim adds, “Even though I’m in my late 30s and I’m just finish college or attempting to do that now, it’s never too late.”

College admissions scandal aside, her recent studies have shown light on the strengths in her marriage to Kanye West. Kim shares that the Yeezy designer has really stepped up to the plate now that Kim is juggling work and studies. “During the week at night, there’s a lot of time I’m like, ‘Babe, you need to take the kids.’ He’s honestly really stepped it up and I’m so grateful to him for doing that,” she shares.

And while some spouses would grumble and moan at the idea of shifting responsibilities, the KKW Beauty founder says that they made the decision for her to pursue a law degree “as a family.”

Some people on social media have given the reality star grief for taking what they perceive to be the “easy route,” but it hasn’t been an easy road for Kim or her family. “I said, ‘You know what. I have my full time filming job. I have my beauty business. I work full time and I’m going to take on another 18 hours a week that’s required.’ Some people just didn’t really understand how it works, and I think people assume that I’m just prepping for the Bar and not actually studying or going to school,” the star explains. 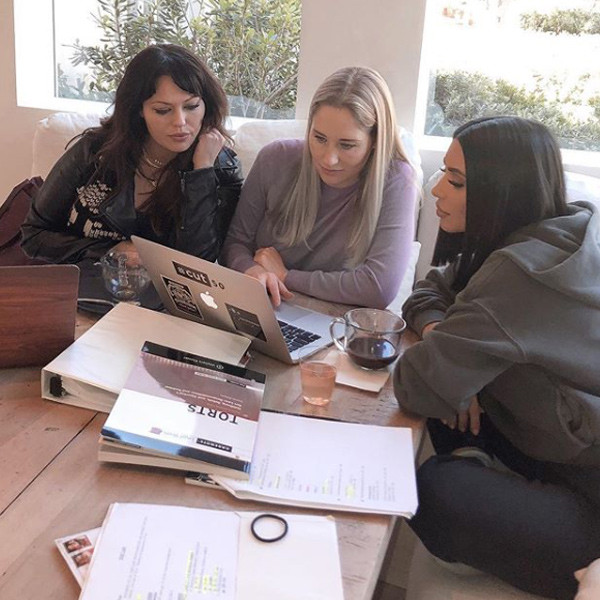 On Monday, the star told her fans in an impassioned Instagram post: ” I’ve seen some comments from people who are saying it’s my privilege or my money that got me here, but that’s not the case. One person actually said I should “stay in my lane.” I want people to understand that there is nothing that should limit your pursuit of your dreams, and the accomplishment of new goals. You can create your own lanes, just as I am… For anyone assuming this is the easy way out, it’s not. My weekends are spent away from my kids while I read and study. I work all day, put my kids to bed and spend my nights studying. There are times I feel overwhelmed and when I feel like I can’t do it but I get the pep talks I need from the people around me supporting me.”

Kim plans on taking the bar exam in 2022 and if her determination over the past year shows anything, it’s that she has what it takes to defy the odds. You go, girl!