Let’s face it: Finding the right words to say on Valentine’s Day can be tricky. If you’re anything like me, initiating a romantic convo with your crush might leave you tongue-tied (I’ve been there way too many times). If you agree, you’ll probably love Krispy Kreme’s Valentine’s Day Conversation Doughnuts. Each heart-shaped treat features a cute phrase that’ll help you spread the love — and that means you’ll never run out of things to say when Feb. 14 comes around. Delicious doughnuts and adorable sayings? Talk about a win-win.

Thankfully, you’ll be able to get your hands on Krispy Kreme’s Valentine’s Day doughnuts sooner than later. According to a Jan. 24 press release emailed to Elite Daily, the company’s Conversation Doughnuts will be available from Jan. 30, 2019 to Feb. 14, 2019. That means you have plenty of time to figure out what you’re going to tell your bae when the big day comes around.

Dave Skena, Chief Marketing Officer for Krispy Kreme Doughnuts, talked about the Conversation Doughuts in a press release. He said, "Finding the right word can be like, I don’t know… hard. But eating a doughnut is easy. So, we printed the right words on the doughnuts for you so you can’t mess this up." 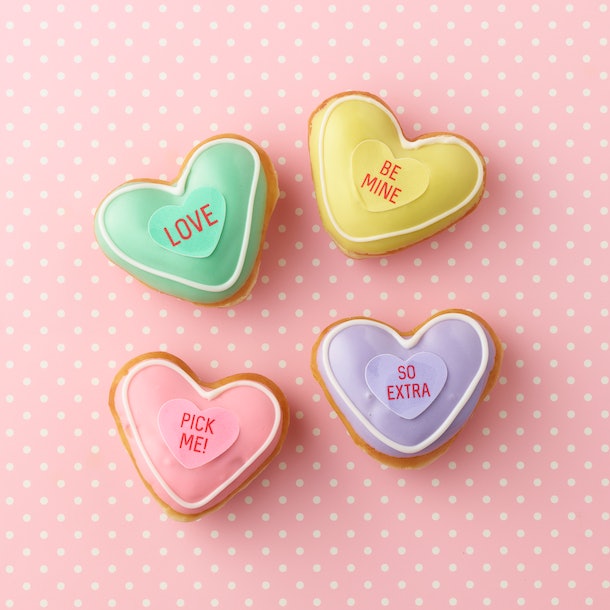 What kind of sayings do these doughnuts have on them, anyway? According to Krispy Kreme, more than a dozen phrases are featured on its limited-time Conversation Doughnuts. As you can see (in the photo above), some doughnuts say "PICK ME!," "SO EXTRA," "LOVE," and "BE MINE." A few others included in the collection say "ALL THE FEELS" and "DM ME," per Krispy Kreme. TBH, these are probably the cutest doughnuts I’ve ever seen.

According to the company’s press release, the sayings that are printed and featured on each doughnut are edible — so you won’t have to worry about taking each phrase off before you devour your doughnuts. That’s probably for the best, because it looks like each printout matches the doughnuts’ pastel icing colors. Based off of Krispy Kreme’s photos, those colors include pink, purple, yellow, and green. Between those hues and the red-printed sayings, the Conversation Doughnuts look a lot like Sweethearts Candy, which will not not be available this Valentine’s Day (sigh). 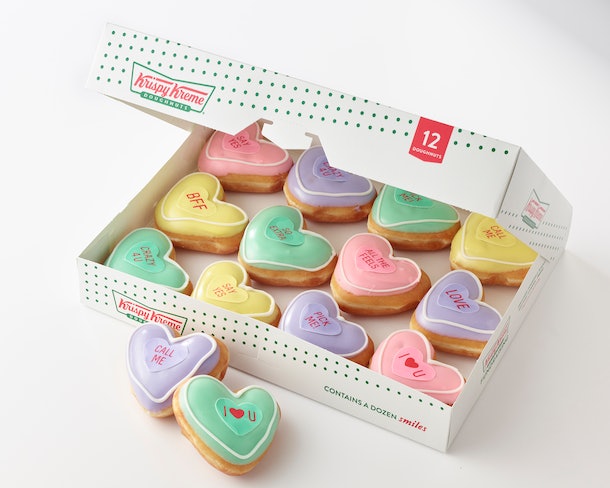 Thanks to Krispy Kreme’s romantic goodies, customers will still have a sweet way to get their flirt on. Speaking of "sweet" things, let’s talk about the Conversation Doughnuts’ flavors. According to Krispy Kreme, there are a total of four fillings that are featured in the bunch. Those fillings include Raspberry, Chocolate Kreme, Strawberries & Kreme, and Cake Batter. I’m getting hungry just thinking about them.

If you are, too, you might be wondering where you can get a Conversation Doughnut when they become available. According to the company’s press release, you’ll be able to score a heart-shaped doughnut at participating Krispy Kreme locations across the United States. If you’re not sure where your closest store is, head to the company’s website and hit "FIND A SHOP." Then, enter your city, state, or zip code.

Again, Krispy Kreme’s romantic doughnuts will officially become available on Jan. 30, so find your closest location and mark your calendar.