Love is in the air — and in the case of one world-famous celebrity couple, in the hallway of their house, too. On Thursday, Feb. 14, Kylie Jenner posted a Valentine’s Day picture of Stormi all dressed up for the love-filled holiday. The 1-year-old daughter of Jenner and Travis Scott was seated beneath a romantically adorned arch of roses, proving she’s undoubtedly the unofficial queen of hearts this year.

On Feb. 13, Scott gifted Jenner an early Valentine’s Day surprise, and he really went above and beyond. Seriously — he upped the ante in a major way. Like, it’ll be pretty hard for anyone out there to top his effort. Jenner first posted a photo of the display on her Instagram Story. In the picture, the 21-year-old makeup mogul is seated on a red, reflective pathway inside her home, and she’s surrounded by roses and candles perfectly positioned on the floor. Above the pathway were three towering heart-shaped arches, all of which were made out of roses as well.

Then, on Valentine’s Day, Jenner gave fans a gift of their own in the form of an adorable Stormi photo. The little girl — who was wearing a voluminous, red tulle dress and holding a tiny matching purse — is basically seated in the same position as her mom was the day before. She’s looking up at all the heart-shaped arches with a sense of fascination and wonder, and it’s all just really, really cute.

Jenner shared a short video to her Instagram on Valentine’s Day as well, captioning the two posts, "must be dreaming!!" followed by the rose emoji. In the clip, the star slowly walks down the reflective pathway through each of the arches. At the end of the road lies yet another impressive addition: a pink, heart-shaped neon sign, flanked by even more roses and candles.

The whole display was soundtracked by Scott’s song, "Drugs You Should Try It," as People pointed out, which made the surprise all that more personal. In Jenner’s video, you can hear Scott singing the lyrics, "I’ve been down and lost for days / Glad I found you on the way."

Neither Scott nor Jenner have ever been shy about sharing their over-the-top displays of affection. Take, for example, the amusement park-themed party the couple recently threw for Stormi’s first birthday. Dubbed "Stormi World" — an ode to Scott’s Grammy-nominated album, Astroworld — every single detail under the big top tent was larger than life. 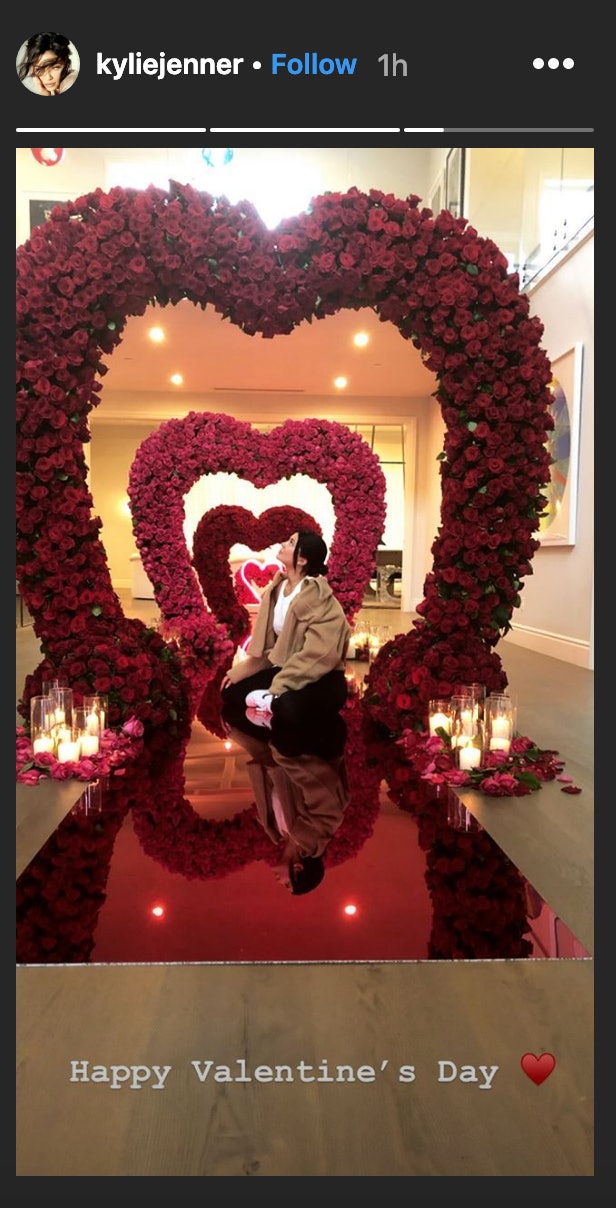 Based, in part, on her birthday party and Scott’s Valentine’s Day display, do you think that Stormi might grow up to expect everything to be giant-sized? Like, what happens if she keeps getting bigger but the world keeps getting smaller in comparison? On the other hand, Scott and Jenner could just roll with the illusion by making every celebration even more giant-sized, but then again, that seems like a lot of work.

Regardless, Scott definitely outdid himself on Valentine’s Day this year. The day isn’t over yet, though, so there’s still a chance that there’s more to come.