When today was announced as polling day, La Mama's artistic director Liz Jones was annoyed. A year and a day on from the devastating fire at her legendary theatre, this weekend holds particular significance. “We haven’t got any flexibility … ScoMo could have chosen any day!”

While the arts has never been an election issue in this country, she fondly recalls Paul Keating and Gough Whitlam being passionate about the industry. For the record, Jones is hoping for a change of government. “The Liberal Party just has completely lost its way and the Labor Party has got itself back on track.” 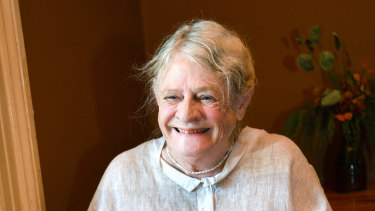 We meet for lunch the day after her birthday. The pioneering theatre maker has been in the chair for nearly 50 years and her vitality shows no sign of waning. That said, it's been a strange old week.

“I find April a time when I feel very vulnerable, especially when it’s Easter as well. I think a lot of people feel it around their birthdays. You become aware of the passing of time and the ageing process and it’s just such a melancholy time.”

To celebrate, she took the day off and spent it reading the finalists on this year’s Stella Prize list.

We’re dining at Shakahari, the vegetarian restaurant next to La Mama that’s hardly changed since it opened in 1972. It's the venue for the theatre's annual general meetings and Christmas shindigs, as well as countless informal gatherings. Her go-to dish is the quinoa croquettes, I can’t go past the vegetarian laksa. In honour of her birthday, we order a glass of bubbles each. 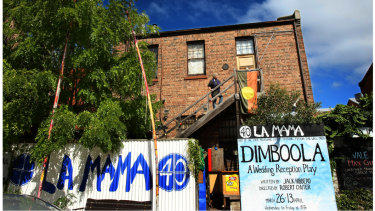 “It’s not just my local, it’s my favourite restaurant I think. And I’m not vegetarian. I love this particular style of food – I bring carnivores here all the time.”

The day the treasured Faraday Street theatre was burnt down is all too fresh in her mind. “In a certain sense I still feel like I’m in denial. It feels like the loss is too big to get my head around.”

Plans for the rebuild are underway, with a campaign to be launched tomorrow to raise the remaining $1.25 million. The completed project will cost about $3 million.

“One of the things that we’re thinking of doing … is having a tidemark. We’re not going to replace the bricks to the roof, a tidemark of bricks will show the original bricks and then we'll have some lovely burnt orange, a bit like sunlight," she says. "It’s an acknowledgement of past wounds.” 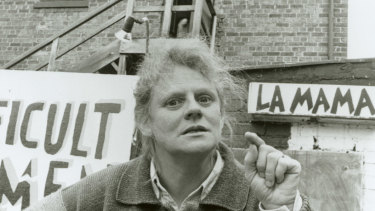 Ironically, the theatre's only heating for about 25 years was an open fire; Jones remembers only too well chopping the wood. "I remember once a log actually rolled out of the fire and burnt through the floor but thankfully nothing happened,” she says. “You actually start to think it won’t happen, it can’t happen.”

But happen it did. The blaze destroyed countless precious artworks, photographs and documents. A portrait of founder Betty Burstall by John Perceval, a Barry Dickins drawing of Jones and several Aboriginal artworks were among many treasures lost, including 40 years of Jones’ diaries, photos and documents about La Mama’s history.

“And nearly a year later, I go to look for something and I think ‘Aha, no, it’s gone’. The wonderful thing is there’s enough of the building left to be beautifully restored. I can’t look at the building now, it’s been so humiliated.”

The mission to rebuild has been entrusted to former La Mama staff member Meg White, along with architects Cottee Parker. While downstairs will be restored “to within an inch of its life”, upstairs will be updated and a new building added. 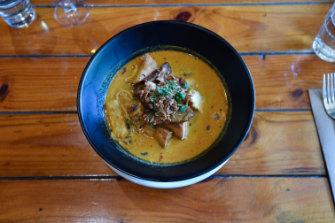 The vegetarian laksa at Shakahari.Credit:Joe Armao

Established in 1967 by Burstall, La Mama was inspired by the off-off Broadway coffee house theatres of New York. Her vision was a space for experimental works, featuring new Australian material by unknown and emerging writers. Burstall and Jones worked together until 1976, when Jones took over; she's held the reins ever since, nowadays sharing the CEO role with Caitlin Dullard. Her only concession to retirement is that she no longer works Wednesdays.

Jones' pioneering work was recognised last month when she was awarded the 2019 Sue Nattrass Award, part of the Helpmanns. Head of the Melbourne Festival in the late-'90s, Nattrass programmed La Mama for the first time. The works were Richard Frankland’s first plays, adapted from his films.

Later, Jones commissioned Frankland to write Conversations with the Dead, about black deaths in custody. “He just came to see me. I’d been to a couple of talks that he’d given and so was an admirer of the work he was doing. He just arrived at La Mama. That’s sort of how things happen … people tend to arrive there with an idea or a script or whatever. They just bowl up.”

Cultivating writers outside the mainstream has underpinned the company's approach. That meant women in the 1980s and '90s, plus Indigenous writers such as Frankland and Andrea James, then artistic director of Melbourne Workers Theatre. Recent commissions address refugees –Them, about Syria, by Samah Sabawi, a Palestinian writer who wrote Tales from a City by the Sea, premieres later this month.

“It’s not just about the fear of being shot, it’s really how to feed and shelter and love. That’s one of the wonderful things about her work – how does one love others and yourself in really desperate situations.” 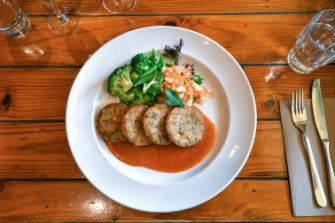 La Mama has a long history of staging multilingual performances, starting with works in Greek by Tes Lyssiotis in the early 1980s. In 1983, Hotel Bonegilla was performed in German, Czech, Greek and Italian; it was restaged a few years ago.

“I think that open door policy is part of the secret of La Mama’s longevity. Things never go stale, people never become jaded. The thing with La Mama is that there’s never much money around so if people don’t love it, they move on.

“It’s really where people get their start and where people try their rather risky ideas, it’s all about grassroots … There’ve been some totally crazy ideas.” 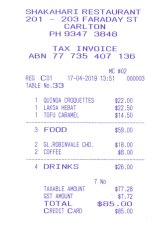 The bill for lunch with Liz Jones.

The Mongrels Show by Howard Stanley, staged in 1977, comes to mind. "He had all these lost dogs from the Lost Dogs home and naked people performing on a chess board, rather than white knights and black knights, black dogs and white dogs.

“We got letters of complaints about the nudity, from the RSPCA warning us about exploiting dogs. We put the dogs out for adoption at the end. You cop it from all directions.”

Jones’ role as artistic director, and joint CEO, is akin to that of a midwife, explaining how to take that crazy idea – whether embryonic, half or fully formed – to the outside world. “To mediate,” she says.

A keen actor growing up, Jones did an arts degree and then a Diploma of Education, majoring in Aboriginal education. Back then, there were no acting courses on offer. 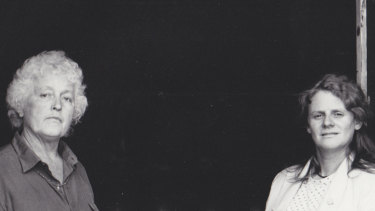 At Brunswick Girls High in the early 1970s, Jones met fellow teacher Burstall. Half the school's population was Italian. Jones loved teaching and taught for 20 years; she fears there’s nowhere near as much creativity in education these days. “MySchool and NAPLAN have done a huge disservice. I was so lucky to be a teacher when I was … it was a wonderful, very free period. We had open classrooms, we were innovating all the time, we really felt we had the freedom to do as we wanted. The system has closed in on itself.”

That background influenced her determination to work with young people. After the rebuild, Drummond Street's Courthouse Theatre will, in part, be devoted to that demographic. “A lot of them are quite disaffected, have dropped out of school or uni and theatre is just such a great opportunity for creativity, to express themselves.”

In the early '70s, she also met and married playwright and visual artist Lloyd Jones, with whom she now has two children “and inherited three”; together they have nine grandchildren.

Although working mainly as an administrator, Jones continues to perform. For the past six years she’s been involved in a project of Uncle Vanya with Adriana Popov, and she'll perform in her husband's new show in July. “Once a year I have an out and I can go and become just a performer, [with] no other responsibilities.” 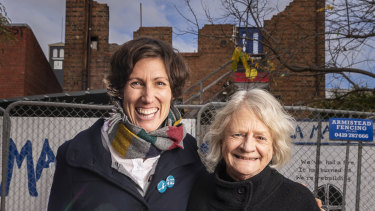 Jones and Caitlin Dullard in front of the remains of the theatre last year.Credit:Daniel Pockett

Patricia Cornelius winning $250,000 recently in the Windham-Campbell Prize for drama was a much deserved recognition of one of Australia’s finest, says Jones. Addressing issues such as patriarchy and violence against women, Cornelius’ plays are powerful. “Her work is some of the greatest work I’ve seen,” she says. “I think it should be a clarion cry too, to the conservatism of some arts programming in Australia. We do see wonderful work in a lot of the festivals … our flagship companies aren’t doing enough of those sorts of explorations.”

Holidaying in Japan last year, Jones' phone rang and she nearly didn't answer as it was an unknown number. Luckily, she did – down the line was the Victorian Minister for the Arts. "'It’s Martin Foley, Liz,' he said, 'I’ve got a million for you.' It’s like you feel blessed or something, like with the Pratts."

The Pratt family were the first to offer support when La Mama needed to raise the $1.7 million needed to buy the Faraday Street building in 2008. Similarly, last year's fire has inspired "a lot of deeply moral support". Jones hopes the new La Mama will be going strong in another 50 years. "And that it still has the open door policy and [is] encouraging diversity and difference and all the things it has always lived for,” she says.

“Understanding comes from meeting the other. We spend far too much time with people who reflect our own values back at us.”

See lamama.com.au/supportlamama to donate or for more information.