Labor and the Greens have delivered a shock defeat to the federal government with a Senate vote to strike down plans to invest taxpayer funds in new fossil fuel technologies, taking advantage of the surprise absence of One Nation leader Pauline Hanson to win the outcome.

The Senate vote on Tuesday night vetoed Energy Minister Angus Taylor’s changes to regulations to expand the remit of the Australian Renewable Energy Agency (ARENA) to fund the development of carbon capture and storage and “blue” hydrogen which is produced with gas. 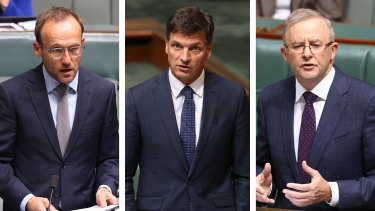 ARENA was established by the former Labor government to support innovative renewable initiatives and make it more competitive with established energy technologies, but the plan to expand its investment remit triggered a furore among environmental groups.

The Greens and Labor each proposed a motion in the Senate to disallow the ARENA changes, which were drafted as regulations issued by the minister rather than amendments to the law.

The government hoped to gain a majority of senators to block the disallowance motion, but Senator Hanson’s absence proved decisive.

Mr Taylor had proposed a change to ARENA’s mandate to enable it to administer funding to support the government’s technology road map, which aims to work with the private sector to stimulate investment in lower emissions technologies that are selected for their commercial prospects.

His move was also a political wedge for Labor, which is gripped by internal division between its left faction, which is generally opposed to funding for any fossil fuels, and right-wing members who want the party to appeal more to blue collar workers with support for legacy energy industries.

Mr Taylor greeted the defeat by blaming Labor for preventing ARENA from backing technologies that could lower emissoins.

“Labor have shown their true colours – opposing investment in new clean technologies which will create jobs and economic opportunities,” he said.

Greens leader Adam Bandt said the defeat of the ARENA remit expansion was a “massive blow” to the government.

“First the Liberals tried to abolish ARENA and then redirect its funds to coal and gas, but by backing the Greens motion, the Senate has just saved ARENA,” Mr Bandt said.

Labor and the Greens gained support from Jacquie Lambie and South Australian independent Rex Patrick to gain 28 votes at 8.30pm on Tuesday. The Coalition gained support from One Nation Senator Malcolm Roberts but not the party’s leader, Pauline Hanson, and only gained 27 votes.

It is common for federal laws to give powers to ministers to make rules by regulations. However, the rules are often “disallowable instruments” that can be struck down by a motion in either chamber of Parliament.

Labor could not get the numbers to disallow the regulations in the House of Representatives, but the Greens’ attempt succeeded in the Senate.

“Angus Taylor is attempting to turn the Australian Renewable Energy Agency into something that was never contemplated when ARENA was created,” she said.

“He is trying to contort ARENA’s remit from one focused on renewable energy into one that can be applied to the minister’s personal favourite programs, many which have no connection to renewable energy whatsoever.”

But the Minerals Council of Australia backed the changes on the grounds they would encourage research and development into carbon capture and storage, hydrogen, improved soil carbon measurement and emission reduction technologies.