Attorney-General Mark Dreyfus has told colleagues to prepare for a “slow build” campaign on an Indigenous Voice to parliament, as Opposition Leader Peter Dutton accused the government of being unable to answer basic questions on the process.

No extra details on the timeline for a national vote or how the Voice would operate were canvassed in the Labor party room on Tuesday, as Minister for Indigenous Australians Linda Burney told MPs not to be distracted by criticism from the Greens and restated “our commitment is for a referendum this term”. 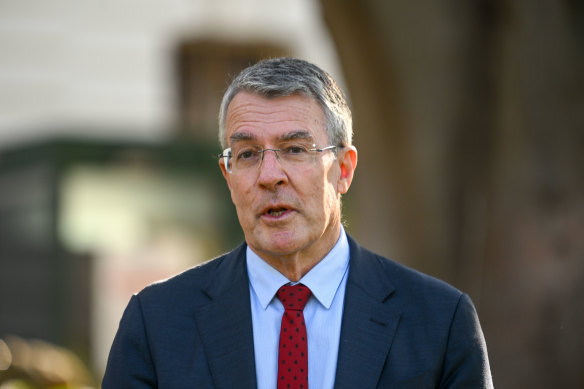 Attorney-General Mark Dreyfus has told the Labor caucus momentum towards a referendum will be a “slow build”.Credit:Eddie Jim

Burney is expected to outline the next steps towards the referendum in a major speech on Thursday, more than five weeks after the prime minister unveiled proposed wording to enshrine a Voice in the Constitution at the Garma festival in Arnhem land.

But despite mounting criticism from the Greens and the Coalition that the proposal lacks important detail, the caucus room discussions indicate the government won’t be hurried.

“We are on a slow build in this campaign. This can only work as a campaign that the community owns,” Dreyfus told the caucus room.

Senator Pat Dodson, special envoy for the implementation of the 2017 Uluru Statement from the Heart that endorsed the Voice, told colleagues the “long haul is on”.

“We have narrowed down our task this term to entrench a successful referendum. The referendum is a substantive matter in our legal framework,” he said.

Addressing the issue in the Coalition party room, Dutton told colleagues there were “still so many unanswered questions” and “Labor seem to be making it up as they’re going along”.

Dutton also reiterated his concerns about the potential for judicial interpretation.

“Just because former High Court judges are assisting with the drafting of the Voice legislation … doesn’t prevent the High Court making interpretations of that legislation,” he said.

He said the opposition wanted to remain generous-spirited and open-minded about the Voice, but the party room would not decide its final position until its questions were answered.

The Coalition’s reservations highlight the groundwork Labor needs to do inside parliament to build support for the Voice. This has been made more difficult by the hardening stance of Greens First Nations spokeswoman Lidia Thorpe, who has called the referendum a “waste of money” and accused Labor of having “no clear pathway” and trying to “ram this down our throats”.

However, Thorpe struck a more conciliatory tone on Tuesday following a 20-minute meeting with Burney during which the pair agreed to discuss the Voice in more detail at a later date.

Describing the meeting as “good”, Thorpe said she had raised the Greens’ push for recommendations to be implemented from the Bringing Them Home report on the Stolen Generation and the royal commission into Aboriginal deaths in custody – two of the party’s key demands in exchange for supporting the Voice.

During the Labor caucus meeting, Burney told Labor MPs not to be “distracted” when asked why Greens voters appeared more positive about the Voice than some of their elected representatives.