Police are hunting for a hit-run driver who caused a near-fatal crash in Victoria’s high country. involving an elderly couple whose car and caravan exploded into flames. 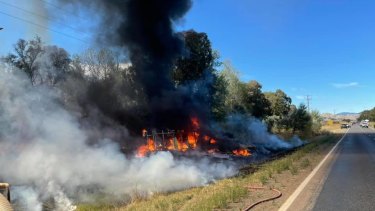 The fiery wreckage of the couple’s car and caravan.Credit:Nine News

The couple’s silver Suburu, which was towing a caravan, was forced off the road by the impact, rolled and burst into flames about 11.15am.

The driver of the Toyota did not stop to assist.

Witnesses have told Nine News they dragged the seriously injured 73-year-old male driver from the car minute before a fiery explosion.

“One fella was obviously pretty badly injured so we dragged him across the road and sort of sheltered him … so he was away from the fire because we saw gas bottles on the caravan,” witness Scott Purcell told the TV network. 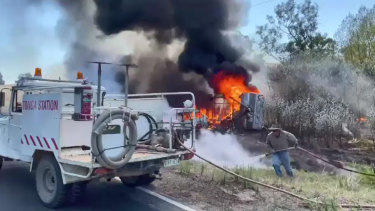 The burning car and caravan.Credit:Nine News

Meanwhile, detectives are also seeking witnesses to a separate hit-run collision in Dandenong that happened later on Thursday.

A 24-year-old man was left fighting for life after being hit by a dark coloured SUV towing a covered box trailer about 2.15pm.

The offending car was travelling west on Clow Street when it struck the young man between Thomas Street and Robinson Road. 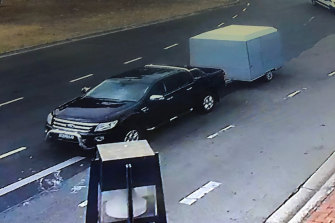 Police wish to identify the driver of this car after a hit-run incident on Thursday afternoon in Dandenong.Credit:Victoria Police

Anyone with information about either incident should contact Crime Stoppers on 1800 333 000 or submit a confidential report at www.crimestoppersvic.com.au.