‘Is she like me?’ Heartwarming images capture the moment a four-year-old girl with alopecia ‘lit up’ with joy after spotting a MAC Cosmetics campaign featuring a model with a bald head

A four-year-old girl with alopecia got a whole new outlook on her condition after seeing a stunning beauty campaign featuring a bald model.

Iylah Hanley, from Mount Maunganui, New Zealand, was shopping with her mother Amelia Palmer, in her local department store earlier this month when she came across a MAC Cosmetics campaign starring Parris Goebel, the celebrity choreographer behind Jennifer Lopez’s Super Bowl performance, who has a shaved head.

Capturing the touching moment on camera, Amelia revealed how her young daughter ‘lit up’ when she saw the images of  Kiwi dancer Parris, 28, recalling that Iylah asked whether the A-list dancer ‘has alopecia like me’. 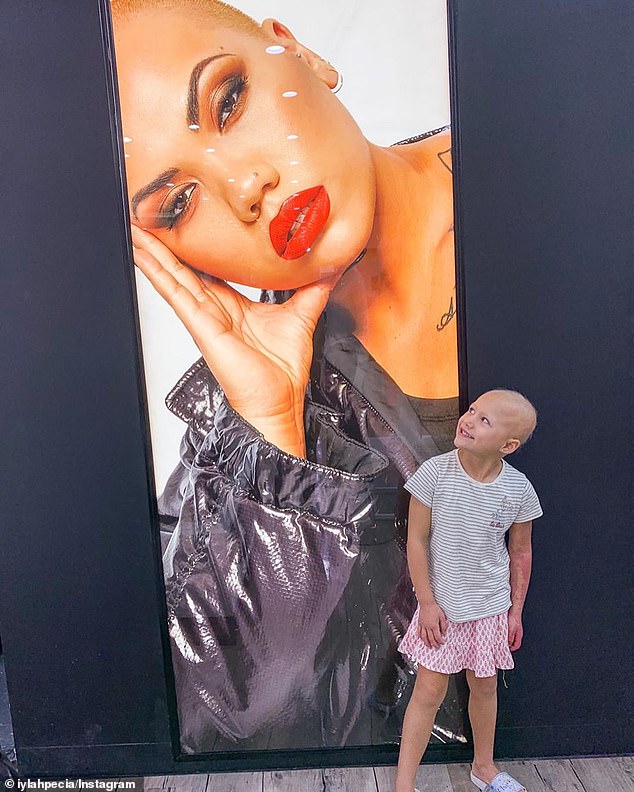 Inspiration: Four-year-old Iylah Hanley, who has alopecia, was overjoyed when she saw a MAC Cosmetics campaign featuring celebrity choreographer Parris Goebel, who has a shaved head 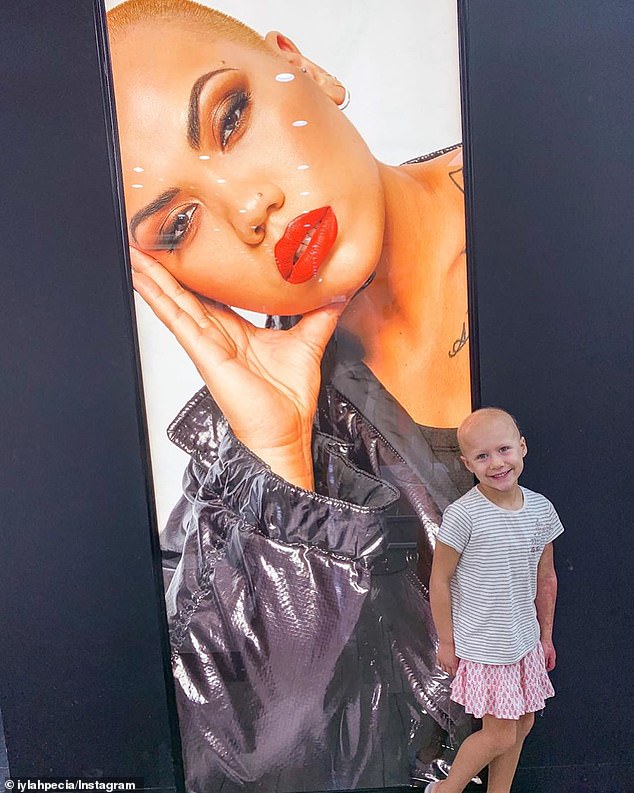 ‘Is she like me?’ The little girl’s mother Amelia Palmer shared that her daughter ‘lit up’ when she saw the campaign, and immediately began asking questions about Parris’ hairstyle

‘This morning we walked into [Farmers department store] and the first thing Iylah saw was @parrisgoebel with short hair,’ Amelia shared, while posting photos of her daughter posing proudly in front of the campaign image.

‘She goes (with soooo much excitement in her voice), “Mum! Does she have alopecia like me?”’

Amelia said that she then explained to Iylah that Parris likely ‘chooses to have her hair short’, prompting the little girl to marvel at the thought that anyone would opt to model such a short haircut.

‘Iylah pauses and I watched her as she thought about what I just said…. she said, “Wait, so she chooses to wear her hair short?” She then lit up and asked to take a photo with her.’

But while the moment was incredibly uplifting and positive for Iylah, her mother confessed that it sparked upset for her, because it reminded her just how much her daughter worries about her appearance.

She noted that Iylah’s concern over her looks has come as a result of unfair beauty standards, and urged other to echo her message that beauty truly is on the inside.

‘I find it absolutely crazy that a 4.5 year old questions whether it’s “cool” or not to have short hair due to her life experiences in such a short time?’ she continued.

‘I always tell her that beauty is on the inside, you can express who you are on the outside but what really matters is on the inside but it does hurt that she thinks this way.

‘Anyways take what you want from this wee story I just want to say a massive THANK YOU to @parrisgoebel for expressing who you are in such a beautiful way and giving my baby girl a smile no one could wipe away!’

Amelia’s touching post about her daughter’s reaction to the MAC campaign quickly spread across social media, with hundreds of people leaving comments praising the mother-daughter duo for their positivity.

‘I think that this is priceless, Iylah with your story you are raising awareness about Alopecia areata, but also about being unique and beautiful just the way that you are!’ one person commented.

‘Because of you, your whole school will be educated about Alopecia areata, your community will recognise you and I’m sure you already touched many hearts!

‘And now all around the world, let’s spread the word, so looks might not be as harsh when staring in you direction, and others will let you be comfortable in your own skin, recognise you for who you are!’

Another added: ‘She is such a beautiful and bright girl!! Shes gonna take over world when shes older.. Keep being you Iylah!!’

The post also caught the attention of Parris herself, who shared the images on her own account, as well as the MAC team in New Zealand, who decided to arrange a private meet-and-greet so that Iylah would have the chance to meet the dancing superstar in person. 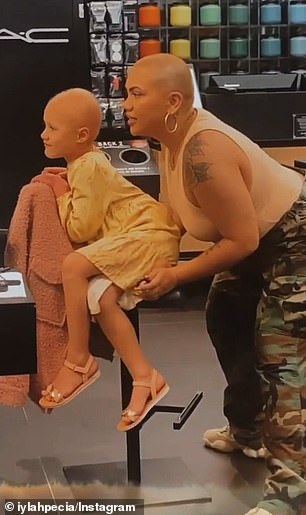 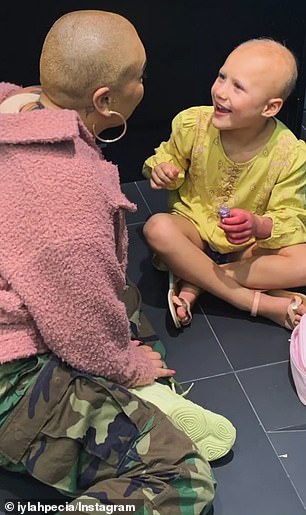 Affection: Parris also posted about the meet-up on her Instagram, where she praised Iylah’s positivity and confidence 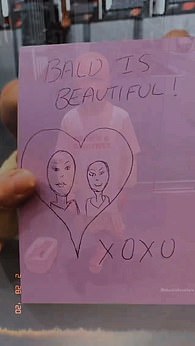 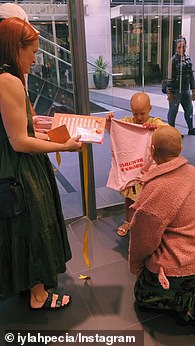 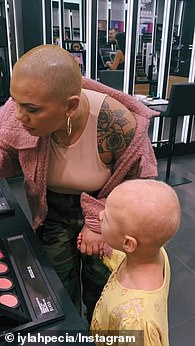 Making memories: The duo played with makeup, did drawings, and played games together 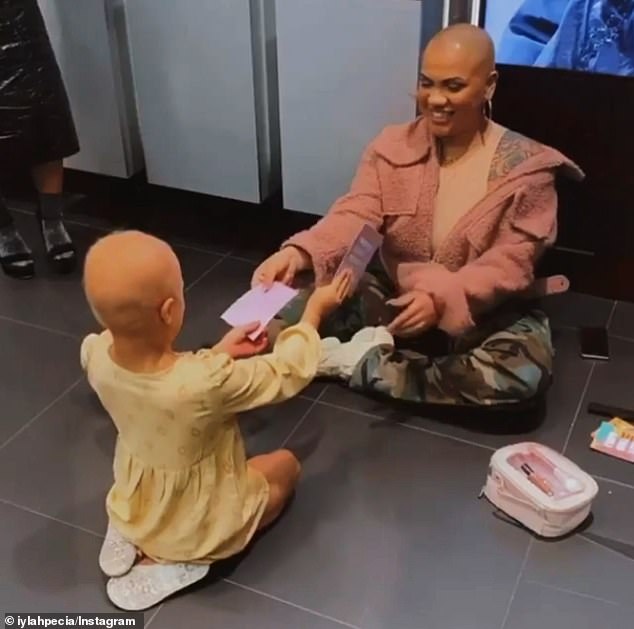 Fighter: ‘What touched me the most is although she has been through so much at such a young age, over time she has gained the confidence to ignore what people think,’ Parris wrote 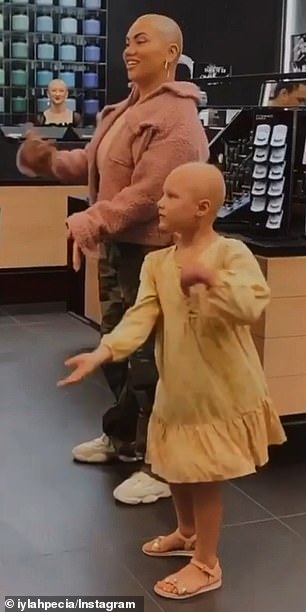 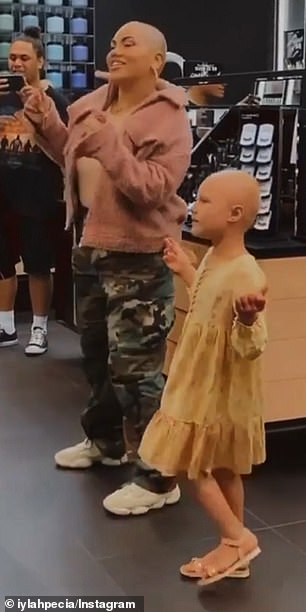 Changing attitude: Iylah’s mother Amelia shared, ‘I always tell her that beauty is on the inside, you can express who you are on the outside but what really matters is on the inside’ 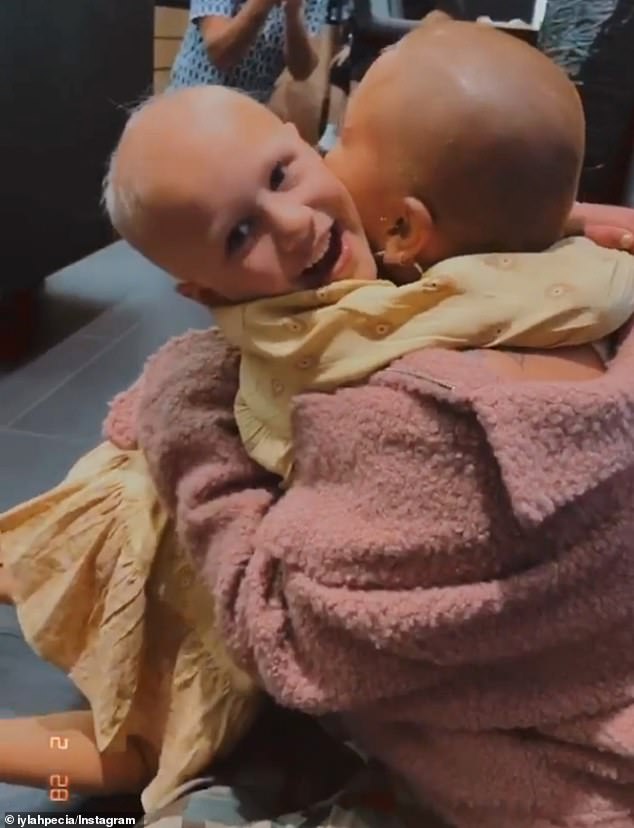 World domination: ‘Thank you Iylah for inspiring myself and people all over the world…together we are bald and BEAUTIFUL,’ Parris told the youngster

‘Following that traction, the MAC New Zealand team shut down the entire store and arranged for a meet and greet with Parris and senior artist Kieke for them to have their own makeup date,’ a spokesperson for MAC revealed to DailyMail.com.

The duo were given the chance to bond and hang out in the store, where they also received matching makeovers.

In a touching Instagram tribute written by Iylah and her mother to Parris, the duo thanked the superstar for ‘changing Iylah’s life’, describing her as having ‘the purest soul and a beautiful heart’.

Superstar: Parris has worked with a host of A-listers, including Justin Bieber and Rihanna, and was responsible for choreographing Jennifer Lopez’s recent Super Bowl performance

‘You took me and my family in like we had known you forever and you treated us like we were apart of your family but most importantly you made me feel like the most important little girl in the world – for that I am forever grateful,’ the post read.

‘Thank you for being the purest soul and for having a beautiful heart. You have changed my life and I love you for it.’

And it seems the feeling was mutual, with Parris sharing an equally heartfelt post about Iylah on her own account, while sharing several photos of their meeting.

‘A week ago I was tagged in a post by Iylah’s mum saying her baby girl Iylah who has alopecia was so excited to see my picture at the @maccosmetics store,’ she wrote.

‘Iylah started losing her hair at two years old so it meant so much to her to see a bald girl rocking it. I had to meet this beautiful girl, so we shut down the MAC store and had our own little make up date!

‘We danced, we wrote each other cards, we did each other’s make up, we had the best time.

‘What touched me the most is although she has been through so much at such a young age, over time she has gained the confidence to ignore what people think and walk out into the world and show everyone how beautiful she is.

‘Thank you Iylah for inspiring myself and people all over the world…together we are bald and BEAUTIFUL.’

Alopecia, which causes baldness, is thought to be an autoimmune disorder. The immune system – the body’s defense system – turns on itself.

‘Typically, one or more small bald patches, about the size of a 50p piece, appear on the scalp. The hair can start to regrow at one site, while another bald patch develops. Hair may also begin to thin all over the head,’ says Marilyn Sherlock, chairman of the Institute of Trichologists.

‘For some reason, the body’s immune system begins to attack its own hair follicles. Special white blood cells in the body, known as T-lymphocytes, cause the hair to stop growing,’ she adds.

Can worry make it worse?

Stress has been shown to prolong the problem.

Is it an inherited condition?

There is strong evidence to suggest that alopecia, like other auto-immune diseases, runs in families. About 25 per cent of patients have a family history of the disorder.

Alopecia areata usually affects teenagers and young adults, but it can affect people of any age. It is just as common among men as women.

Is there a cure?

There is no known cure, although there are various treatments which may be effective for some people.