A student has her sights set on the UK Number 1 with a tear-jerking charity single for bereaved children.

Molly Lane, 17, from London, recorded ‘Do They Dance In Heaven’, which was written by songwriter Perrie Young, after the loss of his father in April 2017.

It went live on Monday morning, and by 1pm it had already made the Top 40.

It is currently at number 26 ahead of Little Mix and just behind Liam Payne in the charts and will raise money for child’s bereavement charity Grief Encounter.

The performing arts student is now hoping to reach number one this weekend, with all proceeds going directly to bereaved children in the UK.

In a bid to get the single to number one, Leigh-Anne from Little Mix also tweeted: ‘Mixers please support this beautiful song in aid of Grief Encounter, an amazing charity supporting kids through bereavement.’ 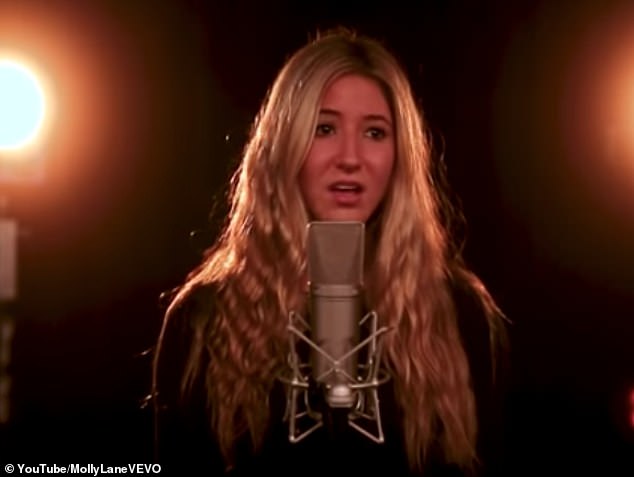 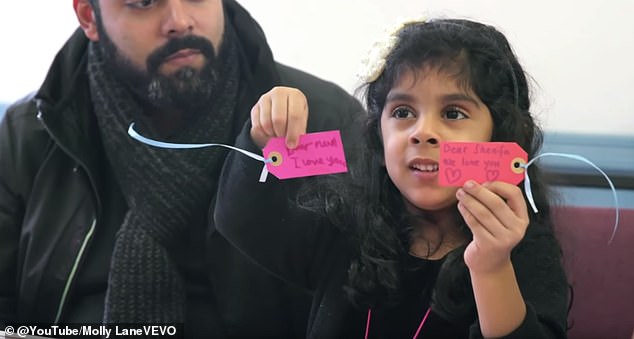 In an emotional clip from the video, a little girl holds up a note saying: ‘Dear Mum. I love you.’ All proceeds for the single go directly to bereaved children in the UK 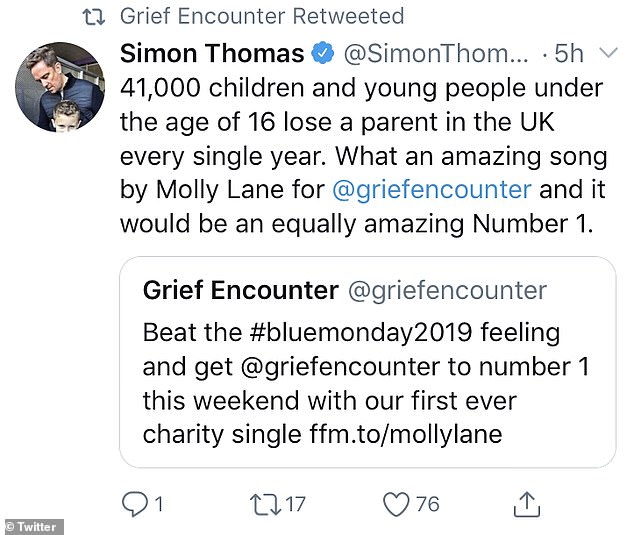 Sky Sports presenter and former Blue Peter host Simon Thomas has spoken out in support of the single. He devastatingly lost his wife Emma in November 2017, just three days after being diagnosed with acute myeloid leukaemia 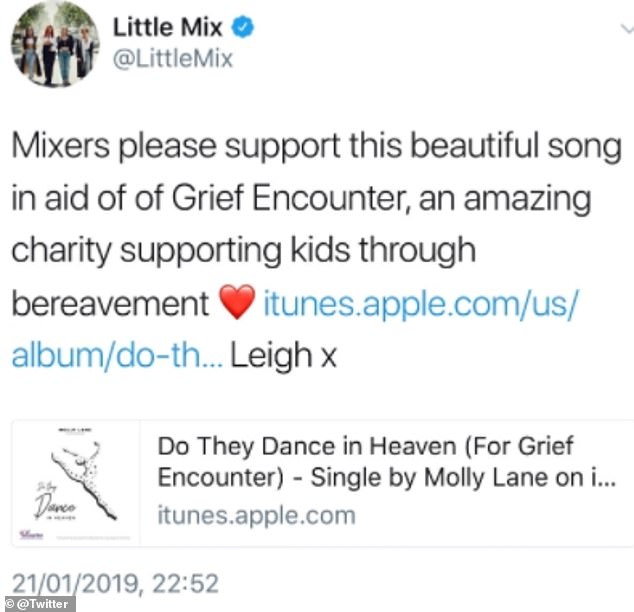 In a bid to get the single to number one, Leigh-Anne from Little Mix tweeted: ‘Mixers please support this beautiful song in aid of Grief Encounter, an amazing charity supporting kids through bereavement’

Sky Sports presenter Simon Thomas, who lost his wife Emma in November 2017, just three days after being diagnosed with acute myeloid leukaemia, also took to social media in support of the single:

’41, 000 young children and young people under the age of 16 lose a parent in the UK every single year,’ he penned.

‘What an amazing song by Molly Lane for @griefencounter and it would equally be an amazing number one.’

Meanwhile, First Dates maître d Fred Siriex also encouraged the public to ‘help them get to number one and download now.’ 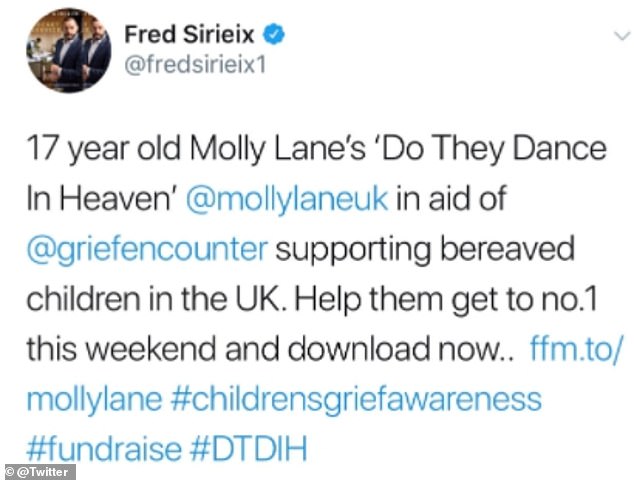 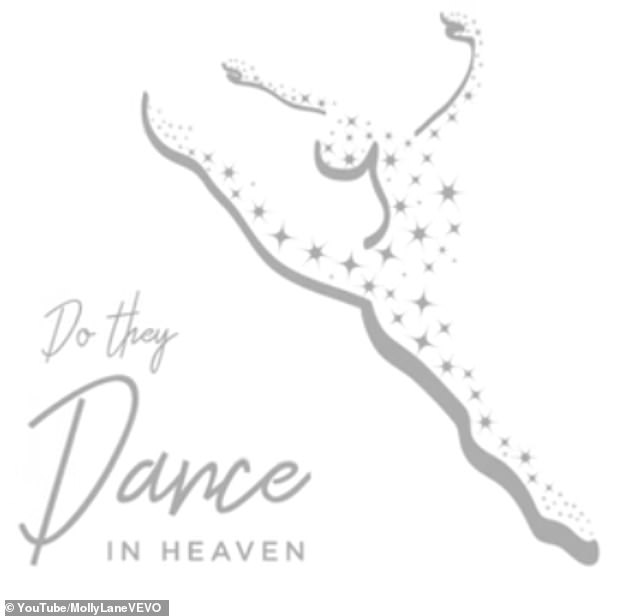 Molly Lane, 17, from London, originally recorded the single ‘Do They Dance In Heaven’ (single cover above), which was written by songwriter Perrie Young, after the loss of his father in April 2017

With a passion to inspire children to express themselves via performance, Molly had volunteered for the charity, singing at various community events.

‘I sang at a memorial service for one of the children’s siblings who attended Grief Encounter,’ said the performing arts student.

‘It was one of the saddest things I have ever experienced. I became so emotional, being with children my own age, that were so like me but had been through so much; that I made up my mind to raise money for Grief Encounter and help children deal with their pain.’

Molly sung the song and produced the video with only the help of her fellow students and friends at the University Technical College in Elstree, North London.

The proceeds of the single are all for a good cause – as in the UK, one child in every classroom will experience the death of a parent or sibling before they reach 16 years of age. 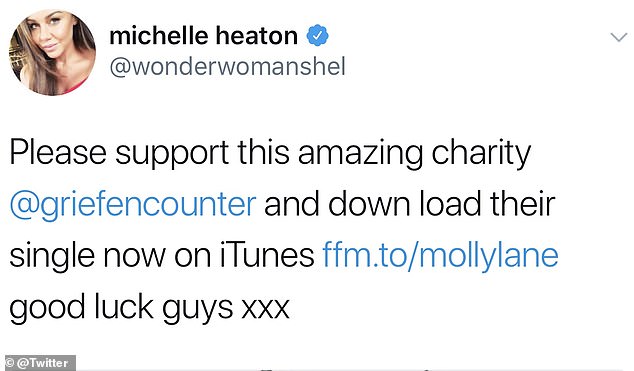 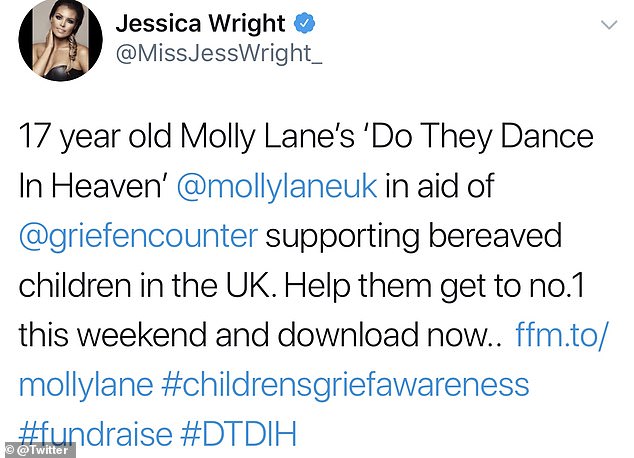 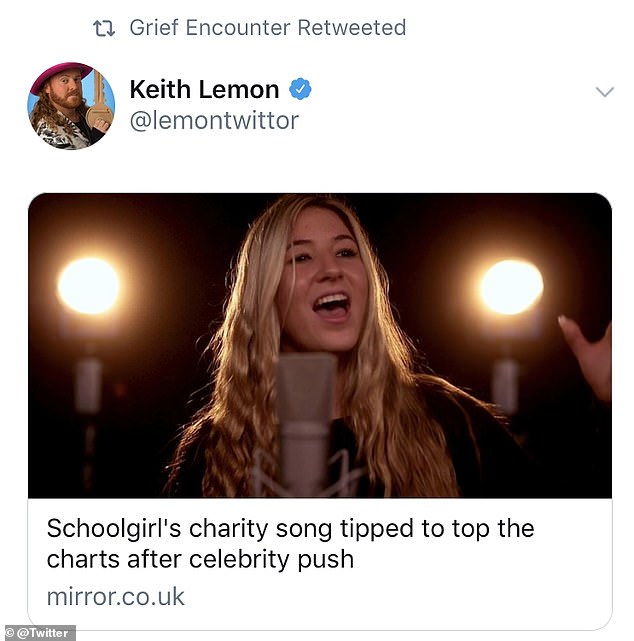 Michelle Heaton, Jessica Wright and Keith Lemon are just a few of the famous faces who are encouraging the public to get behind Molly’s charity single and make her this weekend’s number one

Grief Encounter offer a bespoke Family Programme to help alleviate the pain and isolation that so often accompanies the death of a loved one for young people.

With a range of services including one-to-one counselling, residential camps, workshops, group sessions, teen focused e-counselling and creative therapies including a choir and drama courses, Grief Encounter aim to match families with the best form of therapeutic service for them following their bereavement.

‘We are so proud of the effort that this group of teenagers have put in to raising awareness of the issues that children face when having to deal with loss,’ said Shelley Gilbert MBE, founder and Life President of Grief Encounter.

‘It is humbling to see children working hard to help other children, less fortunate than themselves.’

‘Do They Dance In Heaven’ is available to download from iTunes and Amazon from today, 21st January. 100% of monies received from download platforms will go directly to Grief Encounter to support bereaved children in the UK 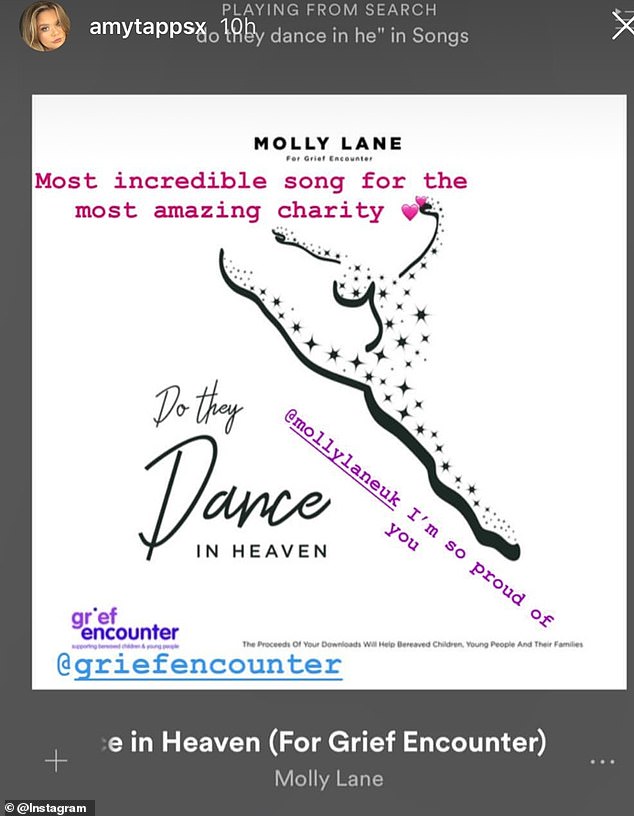 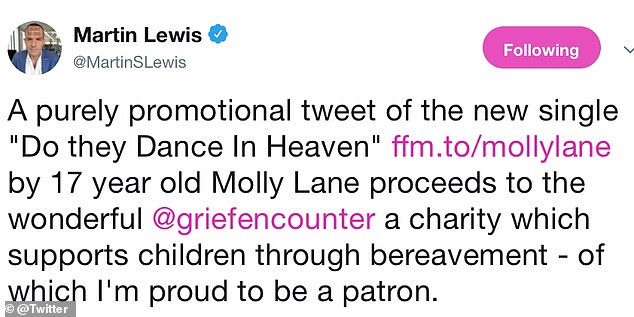 Martin Lewis and Gogglebox’s Amy Tapper also took time out to promote the charity single, with the money expert writing: ‘A purely promotional tweet of the new single ‘Do they Dance in Heaven’ by 17 year old Molly Lane. Proceeds to the wonderful @griefencounter – a charity which supports children through bereavement’