This is the latest in our series of pieces featuring reflections on the lessons from months in lockdown.

Our household was hard hit by the lockdown – my partner is a chef and I work in the arts, two of the most decimated industries – but surprising silver linings abounded.

Once a wannabe poet, I collected a couple of small awards when young, but abandoned it 30 years ago when I tried to write a crushing event out of my psyche and failed. 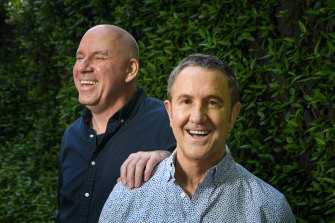 I returned in June to that abandoned poem andfinally dealt with some of that grief. Since discovering the quiet and stillness in that world, the writing has not stopped, and was punctuated by a crazy synchronicity: while re-reading Louise Gluck's magnificent 2012 collected poems in October, she was awarded the Nobel Prize.

The seasons have never seemed so vivid. We live in a suburb with mercifully way more green than asphalt and have been walking and walking, all through autumn, winter and spring.

Watching flora lock down with us then come back, through a colour chart of dizzying complexity, has been a gorgeous thing. I think I've even bonded with trees and vines kilometres from home.

The democracy of meetings via the screen has been a revelation. With every person's tile being equal sized, all have equal weight.

Turn off 'speaker view' and the loudest voice in the room is stymied from being the loudest tile in the Zoom. Bliss.

Being locked in we were more prone to the media stream of world events.

Though "patriotism'' is now a word of which to be wary, I've marvelled at how well Australia has managed this virus, notwithstanding Victoria's second wave and the inordinate hardships imposed on arts colleagues.

I'm reminded how lucky I am that this is home and elated that nowhere else is.

Darker learnings were in the jarring backgrounds to it all.

No humane person can fail to have been riven with anxiety by Trump's political swamp, and the calamitous possibilities of a second term.

Then in the middle of this, the 'public lynching' of George Floyd (as Cornel
West described it) and the global Black Lives Matter movement drew our generation's second incontrovertible line in the sand in just three years, following the sweep of #MeToo.

And next, I realised my shameful ignorance when the names Trayvon Martin, Breonna Taylor and now George Floyd tripped off my tongue, but Tanya Day was the only name I could recall among the hundreds of Indigenous deaths in custody since the Royal Commission, with not
one conviction so far.

My mind had much more room to race.

Ironically, meditation I use to settle me took an unhealthy backseat, though I returned to noting 'gratitudes'.

The first of these, and guiltiest, was that unlike many others I had a partner right through it.

It was our longest stretch in 27 years together without a single break and it worked, joyfully.

My best learning was that all I really need to be happy is being under this roof with the person I most love.

Any fear of getting old has evaporated and another 30 years or so with him will do just fine.