Clearing the air. Molly-Mae Hague apologized for her recent remarks about wealth, poverty and work ethic after being slammed for saying all people “have the same 24 hours in a day” to improve their lives.

“I wanted to come back online today as normal, but I feel like before I do, I just wanted to say this … When I say or post anything online, it is never with malice or ill intent,” the former Love Island U.K. star, 22, wrote via her Instagram Story on Monday, January 10. “I completely appreciate that things can affect different people in different ways, however, I just want to stress that I would never intend to hurt or upset anyone by anything that I say or do.”

‘Love Island U.K.’ Couples Still Together: Where Are They Now?

The British TV personality continued: “I apologize to the people that been affected negatively or misunderstood the meaning of what I said in the podcast, the intentions of the podcast were only ever to tell my story and inspire from my own experience. Love to you all, always x.”

Hague, who is the creative director of Pretty Little Thing fashion brand, made waves earlier this month when a portion of her December 2021 interview on “The Diary of a CEO” podcast resurfaced. During her appearance, the former reality star detailed her rise to the top — but her remarks about her own success sparked controversy with some listeners. 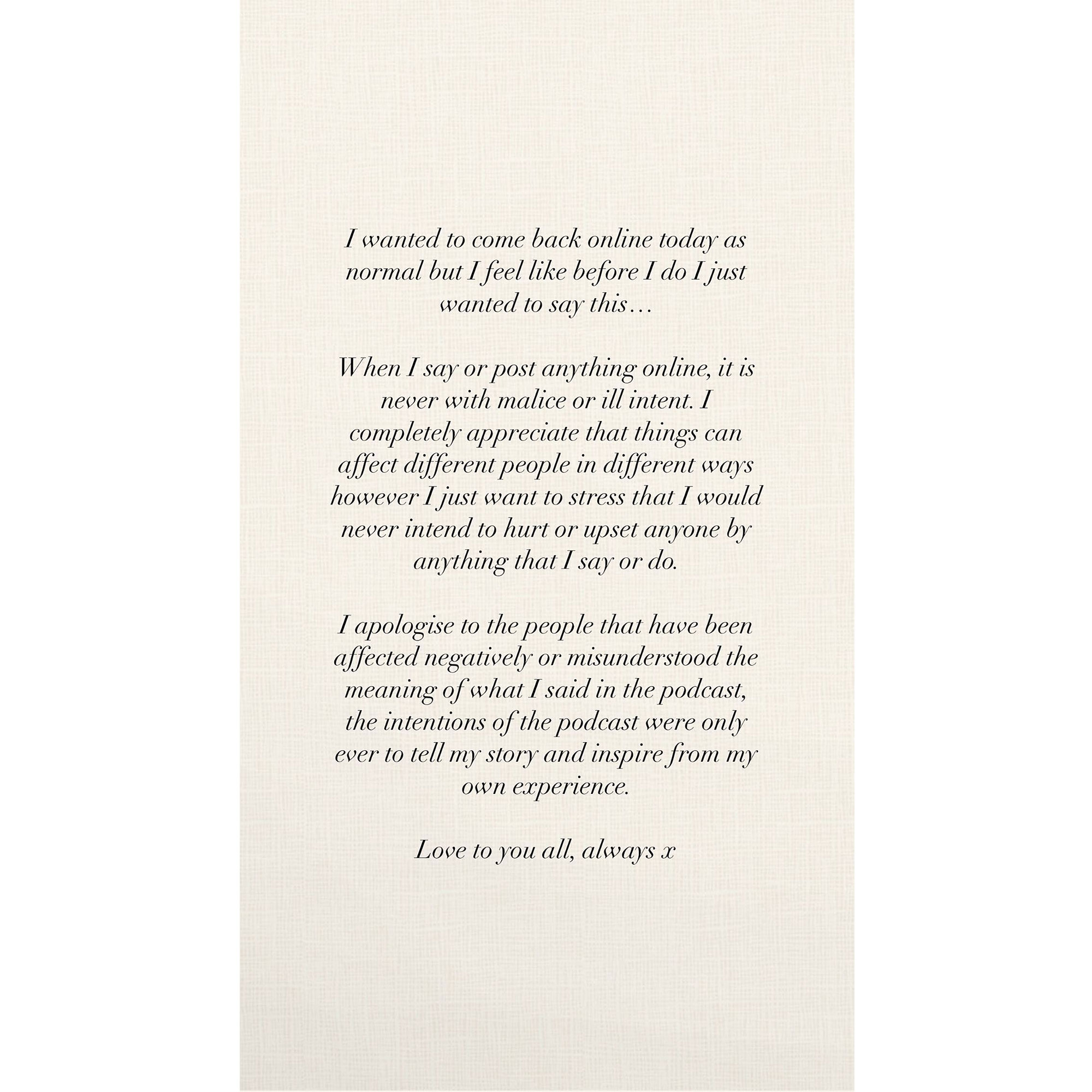 “You’re given one life and it’s down to you what you do with it,” Hague told podcast host Steven Bartlett last month. “Like, you can literally go in any direction. When I’ve spoken about that before in the past, I have been slammed a little bit.”

Hague — who found love on season 5 of Love Island with boyfriend Tommy Fury — doubled down on her comments, however, claiming that “technically what I’m saying is correct, we do [have the same number of hours].”

The influencer noted, “Obviously we all have different backgrounds and we’re all raised in different ways, and we do have different financial situations, but I think if you want something enough you can achieve it. It just depends to what lengths you wanna go to get to where you wanna be in the future.”

The England native insisted that she will “go to any length” to achieve her dreams, adding, “I’ve worked my arse off to get to where I am now.”

Celebrities Who Took a Break From Social Media

Many listeners were not happy with her comments, arguing that poverty and other lived experiences make it harder for some to achieve financial success.

Hague’s team later released a statement amid the backlash, alleging that some fans have taken her words out of context.

“If you listen to this interview, you can see the whole conversation was about her own personal circumstances, how she has grown up and this small clip in the conversation was talking about a quote that inspires her,” the statement to Cosmopolitan read. “Social media users [are sharing] a short snippet from this interview with words such as ‘if you are homeless buy a house’ and ‘if you are poor be poor’ – these are absolutely not Molly’s words, these are not Molly’s thoughts and this isn’t at all the meaning or thought behind that conversation.”