Lyndon LaRouche, the quixotic, apocalyptic leader of a cultlike political organization who ran for president eight times, once from a prison cell, died on Tuesday. He was 96.

His death was announced on the website of his organization, La Rouche/Pac. The statement did not specify a cause or say where he died.

Defining what Mr. LaRouche stood for was no easy task. He began his political career on the far left and ended it on the far right. He said he admired Benjamin Franklin, Alexander Hamilton, Abraham Lincoln and Ronald Reagan and loathed Hitler, the composer Richard Wagner and other anti-Semites, though he himself made anti-Semitic statements.

He was fascinated with physics and mathematics, particularly geometry, but called concerns about climate change “a scientific fraud.”

He condemned modern music as a tool of invidious conspiracies — he saw rock as a particularly British one — and found universal organizing principles in the music of Bach, Beethoven and Mozart.

Some called him a case study in paranoia and bigotry, his mild demeanor notwithstanding. One biographer, Dennis King, in “Lyndon LaRouche and the New American Fascism” (1989), maintained that Mr. LaRouche and his followers were a danger to democratic institutions.

Mr. LaRouche denigrated a panoply of ethnic groups and organized religions. He railed against the “Eastern Establishment” and environmentalists, who he said were trying to wipe out the human race. Queen Elizabeth II of England was plotting to have him killed, he said. Jews had surreptitiously founded the Ku Klux Klan, he said. He described Native Americans as “lower beasts.”

Even so, Mr. LaRouche was able to develop alliances with farmers, the Nation of Islam, teamsters, abortion opponents and Klan adherents. Acolytes kept Mr. LaRouche’s political machine going by peddling his tracts and magazines in airports, and by persuading relatives and friends to donate large sums to help him fight his designated enemies.

He operated through a dizzying array of front groups, among them the National Democratic Policy Committee, through which he received millions of dollars in federal matching money in his recurring presidential campaigns. His forces also sponsored candidates at the state and local levels, including for school board seats.

Adlai E. Stevenson III, the Democratic candidate for governor of Illinois that year, was appalled. He denounced the LaRouche group as “neo-Nazis” and refused to run with Mr. Fairchild and Ms. Hart, organizing a third-party bid instead. He, as well as the LaRouche supporters, lost to James R. Thompson, the Republican incumbent.

Some voters said they had voted for Mr. Fairchild and Ms. Hart because they had been endorsed by Mr. LaRouche’s National Democratic Policy Committee, which they thought was affiliated with the mainstream Democratic Party.

Critics of Mr. LaRouche said he had used that committee to deceive people abroad as well. In 1982, he managed to arrange a meeting with President José López Portillo of Mexico, evidently because Mexican officials thought Mr. LaRouche represented the Democratic Party.

“I’m as American as apple pie,” Mr. LaRouche once said.

Whatever he was, he received thousands of votes in his campaigns for president. In 1980, he outpolled Gov. Jerry Brown of California by a thousand votes in the Democratic presidential primary in Connecticut. In 1986, the candidates fielded by his National Democratic Policy Committee received 20 to 40 percent of the vote in local elections in California, Idaho, Illinois, Indiana, Massachusetts, New Hampshire, Ohio, Pennsylvania and Texas.

Lyndon Hermyle LaRouche Jr. was born on Sept. 8, 1922, in Rochester, N.H., to Lyndon and Jesse (Weir) LaRouche. He grew up in the Quaker tradition. His father was a traveling salesman for the United States Shoe Machinery Corporation, and his mother once ran a Quaker meeting in Boston’s Back Bay.

His was not a happy childhood. Boys would pick on him, he said, but he refused to fight them, which only brought more disapprobation.

It got no better after the family moved to Lynn, Mass. He regarded himself there as an outcast and had few friends in high school. He was not an “ugly duckling,” he said, “but a nasty duckling.”

When World War II began, Mr. LaRouche declared himself a conscientious objector, citing his pacifist Quaker upbringing. But toward the end of the war he enlisted in the Army, despite his mother’s objections. 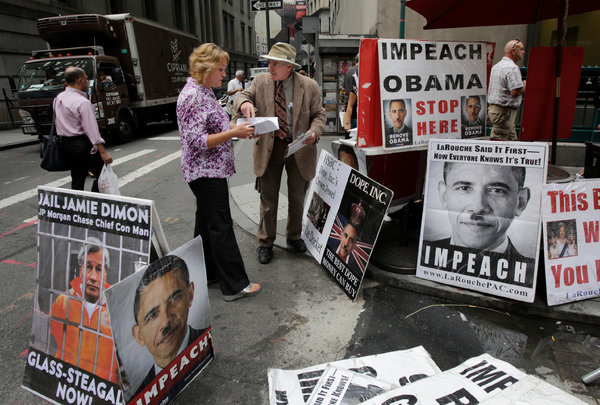 After the war, he enrolled in Northeastern University in Boston but “resigned,” he said, because the university was not challenging his superior intellect. He said he had been able to become the century’s leading economist without formal college study.

He married Janice Neuberger in the early 1950s and had a son, Daniel, by her in 1956. The marriage failed, and he never talked publicly about his son and his former wife in his later years.

Mr. LaRouche’s political roots were Marxist. From 1948 to 1963, he was active in the Socialist Workers Party, a Trotskyite group.

His own group surfaced during the student unrest at Columbia University in the late 1960s as a faction of the left-wing Students for a Democratic Society. It evolved into the National Caucus of Labor Committees, an organization largely made up of young upper-middle-class people who espoused Mr. LaRouche’s Marxist views.

He first ran for president in 1976 as the candidate of the left-wing United States Labor Party, now defunct.

By then, though, his politics had already begun moving to the right. And after spending much time in West Germany, he returned with right-wing, anti-Semitic views. Many of his followers made the shift with him.

George Johnson, the author of “Architects of Fear: Conspiracy Theories and Paranoia in American Politics” (1983), wrote that Mr. LaRouche had developed a conspiracy theory that stretched back to the beginnings of civilization.

“In the world according to LaRouche,” Mr. Johnson wrote, “history is a war between the Platonists (the good guys) and the evil Aristotelians. Anyone who has taken Philosophy 101 can follow the drift: Platonists believe in standards, an absolute truth that can be divined by philosopher kings like Mr. LaRouche. To the Aristotelians everything is relative.”

In Mr. LaRouche’s view, Mr. Johnson continued, “true Platonists believe that industrialization, technology and classical music should be used to bring wealth and enlightenment to the citizens of the world.”

He added: “The Aristotelians are trying to stop them by using not only sex, drugs and rock ’n’ roll but also environmentalism and quantum theory. With their bag of brainwashing techniques, they hope to trick civilization into destroying itself, bringing on a new dark ages in which the world’s riches will be firmly in the hands of the oligarchs.”

Mr. LaRouche’s views became the foundation of a political movement. By the mid-1970s, his organization had 37 offices in North America and 26 in Europe and Latin America. A core membership in the United States numbered about 1,000. One follower won 27 percent of the vote in a local election in Seattle. Mr. LaRouche was pulling in enough money nationally to qualify for federal matching funds for his presidential campaigns.

He had also become an entrepreneur, starting three companies, one of which printed newspapers for high schools; together they brought in revenues of $5 million or more a year.

In his efforts to build a worldwide organization, Mr. LaRouche was helped by his wife, Helga Zepp-LaRouche, a native of Germany who had been a journalist there. Information about his survivors was not immediately available.

Mr. LaRouche was at the apex of his power in the mid-1980s, when he moved his headquarters to a large rented estate in Northern Virginia, in Round Hill, outside Leesburg. When neighbors wondered aloud why he had turned the estate into an armed camp, rigged with electronic security and patrolled by men with semiautomatic rifles, Mr. LaRouche went on the attack. He said that the Leesburg Garden Club was “a nest of Soviet fellow travelers.”

In 1987, after an F.B.I. investigation, Mr. LaRouche was convicted in Virginia on charges of scheming to defraud the Internal Revenue Service and of deliberately defaulting on more than $30 million in loans from thousands of his supporters. He was sentenced to 15 years in prison and sent to a federal penitentiary in Minnesota.

The conviction hurt his movement but did not end it. He was released from prison in 1994, after serving a third of his sentence. He immediately announced that he would run for president in 1996. He ran again in 2000 and 2004. After Barack Obama was elected in 2008, Mr. LaRouche warned that the new president was in “grave and imminent danger” of being assassinated by the “British Empire,” a familiar target of Mr. LaRouche’s.

By 2015 he had long turned against Mr. Obama, calling for his impeachment and accusing him in one instance of orchestrating Turkey’s downing of a Russian fighter jet involved in the war in Syria. “Obama organized an act of war, and has thus endangered the United States, as well as all of humanity,” Mr. LaRouche wrote.

But he could be bipartisan in his attacks. He accused the Bush family of collaborating with Nazi Germany during World War II, and said that the invasion of Iraq in 2003 was a product of a neoconservative conspiracy, led by Vice President Dick Cheney, to deceive the American people. That view was expressed in a series of pamphlets, titled “Children of Satan.”

But Mr. LaRouche was heartened by the election of President Trump, though he perceived a British conspiratorial hand reaching into the United States to foment efforts to “politically paralyze” the president and bring about his impeachment.

That would be a mistake, he said. As his website declared, “Not since William McKinley has a president been so clear in his intent to return the nation to the economic tradition of Alexander Hamilton, to end the policies of British imperial free trade, and make a full commitment to industry, manufacturing, scientific advancement and world peace.”

Dennis Hevesi, who died in 2017, and William McDonald contributed reporting.