A YouTuber has been slammed online for sharing his controversial opinion on the correct way to greet a woman.

He went so far as to call it ‘vaguely patronizing’, claiming the practice was a greeting designed by, and for, men.

Paul also suggested that almost all women are more happy to hug in informal situations.

Fellow Twitter users blasted his controversial views, with many calling him ‘an idiot’ and ‘a moron’.

‘Hah you know people can read these tweets right?’ one perplexed user asked.

Ramsey, who uploads videos about such topics to his YouTube channel, posted the tweet on April 1 and quickly went viral, with thousands responding to his controversial comments.

‘The handshake was designed as a greeting between men to show that your sword hand was empty.’ 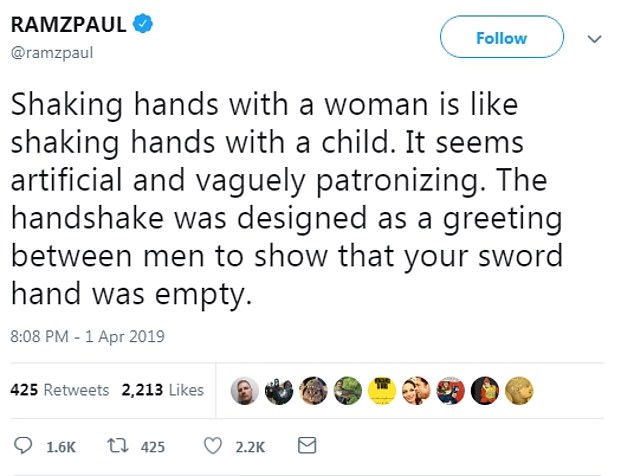 Ramsey’s original post, which caused a flurry of thousands of responses from people who largely disagreed with him

He went on in a second tweet: ‘Almost all women now greet with a quick hug in informal situations.’

Users were stunned, with one commenting: ‘You’re an idiot’

Another was keen to point to the medieval nature of his tweet, writing: ‘October was originally the eighth month in the year. Things change.

One female Twitter user raged: ‘I have never in my life greeted people in a formal setting with a quick hug.

‘My grandfather taught me to shake hands and look people in the eye when doing it.

‘He taught me that I should show respect and be respected. It’s a shame no one taught this to you.’

To make matters worse, Paul later posted on his YouTube channel that to shake hands with a girl who may have ‘little, delicate’ hands ‘doesn’t feel right’.

Other users slammed his original post, with one sarcastically commenting: ‘You know people can read these tweets right?’

After much controversy around his post, Paul tweeted again with his renewed thoughts on the correct way to greet a woman, writing: ‘Do not extend your hand. Simply nod. If she extends her hand for a handshake, shake her hand.

‘If she extends her hand palm down, briefly clasp it. In informal situations she may do a quick hug.’

He went on: ‘In Europe they may also cheek kiss.’