Treasurer Josh Frydenberg has backed the case to cut greenhouse gas emissions to net zero by 2050 in a warning that Australia must not be left behind in a mammoth economic shift that will impose sweeping costs on countries that do not act on climate change.

Mr Frydenberg will point to powerful decisions by global investors to outline the need for the more ambitious target, in the strongest endorsement to date from a senior cabinet minister on a question that has divided Liberals and Nationals. 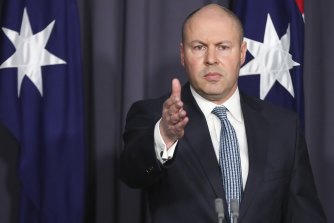 His call is likely to strengthen support for the goal within the government as Nationals leader and Deputy Prime Minister Barnaby Joyce holds out against the target, while Prime Minister Scott Morrison tries to settle the issue after returning this weekend from meetings in the United States.

The government is working on ways to address the Nationals’ concerns about the cost of the transition for the farming and resources industries, in the hope of outlining further plans to cut emissions ahead of the United Nations climate summit in Glasgow, which starts on November 1.

Mr Frydenberg will use a speech to a peak industry group on Friday to warn that Australia will pay an economic cost if it does not match other major nations in reducing emissions to net zero by 2050, arguing that the country depends heavily on imported capital to fuel the economy.

“Reduced access to these capital markets would increase borrowing costs impacting everything from interest rates on home loans and small business loans, to the financial viability of large-scale infrastructure projects,” he says in a draft of the speech.

“Australia has a lot at stake. We cannot run the risk that markets falsely assume we are not transitioning in line with the rest of the world.”

Mr Frydenberg will back the goal of net zero emissions by 2050 on the grounds it is already factored into financial markets as well as being endorsed by most major economies as part of the Paris agreement by United Nations members on climate change.

“Markets are moving as governments, regulators, central banks and investors are preparing for a lower emissions future,” he says.

“It’s a long-term shift, not a short-term shock.

“The world signalled its ambition when more than 190 parties committed at Paris to keep the rise in average global temperatures to below two degrees.

“This has been followed by 129 countries committing to reaching net zero emissions by 2050.

“As a result, trillions of dollars are being mobilised globally in support of the transition.”

Mr Frydenberg, who is also the deputy leader of the Liberal Party, cites public comments from the Deputy Governor of the Reserve Bank, Guy Debelle, about seeing climate events as a permanent change for the world economy and not a cyclical shift.

The speech, to be delivered to an Australian Industry Group forum on Friday, follows comments from Liberals including Dave Sharma, Katie Allen and Andrew Bragg about changing government policy to adopt the net zero target before the UN summit.

“That lack of ambition matters for us as a country,” he said last week.

“It exposes us to climate risks like more intense bushfires, as well as transition risks like global carbon tariffs.“

Mr Morrison’s stated policy is to reach net zero “preferably” by 2050 but leaders including United States President Joe Biden and British Prime Minister Boris Johnson have urged him to commit to the target.

A statement by the US and Australian foreign and defence ministers spoke of adopting new technologies to “make achievement of net zero emissions by 2050 possible” without saying it would be merely preferable.

The government’s formal goal is to cut emissions by 26 to 28 per cent by 2030 but it is likely to upgrade this at the Glasgow summit as well as embracing net zero, provided a deal can be struck with Mr Joyce and the Nationals.

Voters strongly back the net zero target, with 60 per cent in favour, and this includes 57 per cent support among Coalition voters, according to the Resolve Political Monitor in The Sydney Morning Herald and The Age this week.

A key figure at the looming Glasgow talks, United Nations official Nigel Topping, said this week that Australia would lose if it “throws good money after bad” by backing coal and other fossil fuels rather than cutting emissions.

Mr Frydenberg will argue that the government has reduced emissions by more than 20 per cent since 2005 and that this means it is “clearly in sight” of reaching the official 2030 target, while also repeating claims about $20 billion in federal spending on the “technology investment roadmap” that is meant to make further cuts in emissions.

At 494.2 million tonnes, the nation’s emissions in the year to March were the lowest since 1990, according to government figures released on August 31.

Environmental groups dispute the figures, which include changes to land clearing under UN agreements to allow this in Australian calculations, but Energy Minister Angus Taylor said the official statistics showed emissions have fallen 20.8 per cent below the levels of 2005.

The government is yet to reveal what its emission cuts mean for different industry sectors, a sensitive issue given the argument over the cost for industry, but Mr Frydenberg argues it is wrong to assume a decline for industries like resources and agriculture.

“To the contrary, many businesses in these sectors are at the cutting-edge of innovation and technological change,” he says.

“Climate change and its impacts are not going away.

“It represents a structural and systemic shift in our financial system, which will only gain pace over time.

“For Australia, this presents risks we must manage and opportunities we must seize.

“That work is well underway, but there is still more to do.”